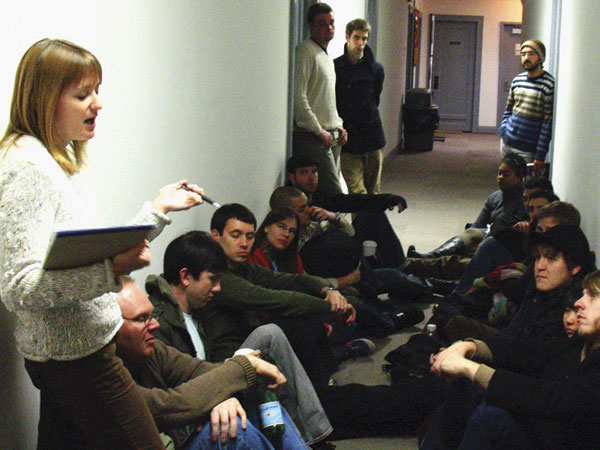 CHICAGO–The Chicago Independent Radio Project (CHIRP), an all-volunteer radio group formed in 2007, will begin webcasting this winter–though millions of city residents who live close to the station won’t be able to hear its programming.

In 2000, the Federal Communications Commission (FCC) began accepting LPFM license applications from community groups around the country. But the broadcast lobby, including the National Association of Broadcasters (NAB) and National Public Radio (NPR) opposed opening up the airwaves. By the end of 2000, Congress–folding under industry pressure–passed the “Radio Broadcasting Preservation Act” to block urban LPFM stations, based on the radio industry’s claim that adding 100-watt, low-power stations into the FM spectrum would endanger full-power broadcasters’ signals.

However, in 2003 the Mitre Corporation, funded by a $2 million grant from the government, found that LPFM stations do not interfere with the signals of existing full-power stations. In late 2007, the FCC recommended that Congress eliminate the interference regulation that blocked LPFM stations from entering urban airwaves.

“I don’t know what more evidence they need,” says Joe Torres, government relations manager for Free Press, a media reform organization. “There is no legitimate basis for NAB and NPR to claim that LPFM will interfere with broadcast stations.”

Since 2000, more than 800 rural LPFM stations have begun broadcasting. In some cases, they provide listeners with local emergency updates and information unavailable on commercial stations.

But urban groups like CHIRP are gearing up for swift passage next year of legislation that could finally bring independent community radio to a city near you.

The legislation, called the Local Community Radio Act, would allow the FCC to license hundreds of LPFM stations to broadcast in urban spectrums currently dominated by high-powered corporate signals, according to Cory Fischer-Hoffman of the Prometheus Radio Project, a grassroots organization that has been advocating for LPFM since 1998. Licenses for these stations–which can have a broadcast radius between three miles and seven miles–would be available to community groups, high schools, labor unions, churches and other nonprofits.

Despite bipartisan sponsorship on Capitol Hill, where it was introduced in both the House and Senate in June 2007, the bill never came up for a vote. That was because the presidential campaign and the financial crisis influenced Congress’ priorities, says Fischer-Hoffman.

“We believe that in the next session we’re going to be able to push it through in the first 100 days,” she says.

The bill’s recent sponsors–Reps. Lee Terry (R-Neb.) and Mike Doyle (D-Pa.), and Sens. John McCain (R-Ariz.) and Maria Cantwell (D-Wash.)–plan to reintroduce it this year, spokespeople in their offices say. But none could say exactly when. Lisa Ellis, Terry’s communications director, says the ongoing economic crisis will affect how quickly legislation can pass.

The NAB will likely continue to oppose bills that alter existing interference protections, says Kristopher Jones, an NAB spokesman. NPR did not respond to calls for comment, but in an April 2008 filing with the FCC, the nonprofit broadcaster opposed loosening technical restrictions on LPFM stations.

While stations await Congress to allow the FCC to hand out Low Power FM licenses, CHIRP is moving forward with its plans online. The group will focus on Chicago music and culture.

“We want it to be a conversation with the city,” CHIRP President Shawn Campbell says. “A Chicago-based station that welcomes listeners from everywhere.”

By February, CHIRP Radio will be web-casting at ChirpRadio.org, although the online station will limit its listenership because of expensive Internet royalty rates.

“There’s no reason for us to wait around and see what may happen with federal legislation,” Campbell says. “Ultimately, at the end of the day, that’s out of our hands.”