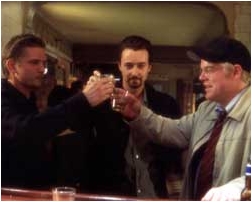 BY Joshua Rothkopf
Share TweetReddit0 EmailPrint
Spike Lee’s latest—his 20th feature including TV work—is at long last the raging masterpiece many have suspected him capable of. 25th Hour eclipses everything he’s done before, including Do the Right Thing, in terms of its insight into the violence wrecking the boroughs and, provocatively, the skyline of his beloved city. (It delivers on the hopes held for Scorsese’s Gangs of New York—a crucible of ample heat but little light.) One doesn’t arrive at filmmaking of this caliber, a modern tale of crime, punishment and the new terror from above, from years of playing it safe: Lee’s hotheadedness has finally matured into a kind of mournful resiliency that no other American director can touch.
To describe the movie as a story about a convicted drug dealer’s last day of freedom is both completely accurate and utterly insufficient; it may nonetheless be the best way to start. Monty Brogan (Edward Norton, never as fierce with such gravity) walks his dog along the East River; a deceptive prologue sets him up as a savior to this animal, but it’s soon obvious he has little love for anything else. A ravaged junkie approaches him for a score, only to be rudely dismissed by his devil god: “I got touched—I’m over.”
It’s not exactly a confession; Monty spits out the words like he’s got all the time in world. He visits his old high school, his father’s bar. Later that night, his false friends gather in a nightclub to raise a bitter glass and privately tear themselves apart for not saving Monty from himself.
Such are the events of David Benioff’s tight little novel, first published in January 2001 and written in the casually caustic, hyperverbal style so immediately associated with New York’s mean streets. On the page, it seems a perfect if slightly unadventurous fit for Lee—another Clockers or Summer of Sam. But something new has been injected into the film version (adapted by Benioff himself); you can see it in the American flags dotting the brownstones and Lee’s breathtaking title sequence, the twin shafts of blue light extending into the night sky. (The wailing vocalist on Terence Blanchard’s score expresses almost unspeakable sorrow.) The city has changed for firefighters and drug dealers alike. And if redemption was never an option for Monty, going out in his unrepentant blaze, Lee now elevates the drama to high political tragedy.
————–
September 11 is a subject that demands the attention of our greatest filmmakers, especially the New Yorkers—frankly, I expect it of them. But I won’t be surprised if their “answers” are less audacious that those of 25th Hour, which suggest both complicity and helplessness in the face of irrational hatred. One quietly devastating scene has two of Monty’s oldest friends, a shy private school teacher (Philip Seymour Hoffman) and a reptilian stockbroker (the revelatory Barry Pepper) arguing about his fate in a downtown apartment overlooking ghostly Ground Zero. Lee holds on the shot as they discuss consequences, inevitabilities, their own inability to confront the truth. But Lee is too smart to simply imply that America, like Monty, had it coming; the gaping hole behind them is not Monty’s impending jail time, it’s Monty himself—a hole hollowed out by hate with nothing left behind but tracks.
This is dangerous, uncharted ground; can it be that Lee was born to take the first stab? The script gives Monty a bilious monologue, an instant classic: Boring into a bathroom mirror, he swears at the whole of New York—the Korean grocers, the uppity Wall Streeters, the hot-shit blacks who never pass the ball on the court. It’s amazing to me how thoroughly this montage is being misinterpreted by critics as an ironic love letter to the city; it’s really just as vitriolic as any that bin Laden might spew. Contempt is a daring idea to build a character around, much less a whole movie, and you thrill to Norton’s hyperactive rant, his attitude. But crucially, Monty never regrets dealing, only getting caught; he’s still a bastard. And Lee’s shift of sympathies to those suffering around Monty is complete.
25th Hour comes to rest on a heartbreaking coda—Monty’s Irish father (Brian Cox) desperately dreaming an alternate future for his ruined son, a daring escape into anonymity and reinvention on the lam. It’s both a heavenly fantasy and a joke. He could never live in Texas; he’s a New Yorker, a drug dealer, a hater. So he goes to jail, just as the work continues at Ground Zero and the city slowly rebuilds. And New York, in all its brutal honesty, will continue to be hated by those who envy its forthrightness. Miss this film at your own risk—you will not hear these ideas from the people in charge.