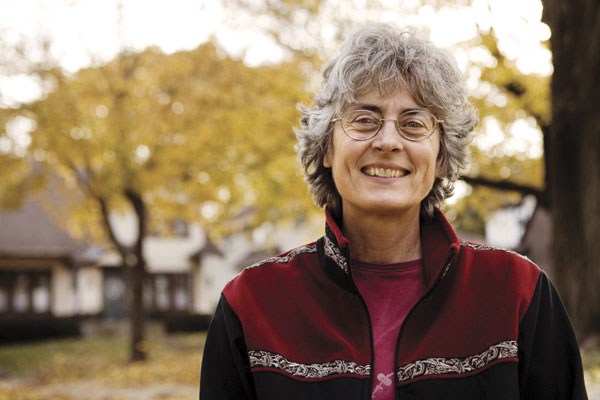 Our Town vs. Exxon

Riki Ott is unlike anyone you have met. A marine biologist with a subspecialty in water pollutants, Ott received her doctorate from the University of Washington and headed to Alaska, but not to take a university position. Instead, Ott fell in love with the wilderness, with the water and with commercial fishing.

Cordova, an Alaskan town (population 2,500) nestled in the heart of Prince William Sound, has been her home for more than 20 years. Largely untouched by mainland American culture, Cordova’s residents were happy to keep to themselves and their wondrous natural surroundings, and Ott felt right at home.

That changed on March 24, 1989–the day everything turned black. Black, as in the oil coating the beaches, rocks and waterfowl gasping for breath, spilling out of the Exxon Valdez.

Exxon assured the residents of Cordova, and the rest of the world, that the largest oil spill in U.S. history was under control. Later, the corporation announced that wildlife, fish and human populations in places like Cordova and Valdez were making a full recovery.

Not One Drop: Betrayal and Courage in the Wake of the Exxon Valdez Oil Spill (Chelsea Green, November) sets the record straight. The real damage, as Ott reveals in her extensively documented, visceral account of pre- and post-spill life in Cordova, extended far beyond legions of dead fish and birds washing up on beaches.

Ott, one of the primary figures willing to stand up to Big Oil before and after the spill, took on a community leadership role that she never envisioned. Retired from fishing and from the “objective” world of science, Ott sought instead to bring a voice to the people of Prince William Sound, whose very way of life stood at the brink of extinction. In the process, she helped to transform the region’s destiny from one of self-implosion to self-actualization.

In These Times spoke with Ott about “invisible losses,” the shift from victim to survivor mode, and the battle against corporate rights.

In Not One Drop, you write that the damages caused by the oil spill was far more toxic than the obvious damage to the environment and the local economy. You write of the “invisible losses” that the community incurred. Can you elaborate?

The truth is that Cordova gutted itself after the spill, especially after our fish runs collapsed in 1992 and 1993. The stress manifested itself in all manner of horrible things, including substance abuse, alcohol abuse, domestic abuse, depression, PTSD [Post-Traumatic Stress Disorder], isolation, divorce and suicide. These are the so-called “non-economic losses” in a court of law.

For sociologists who came in and studied us after the spill, Cordova became a case study of what happens when a whole community of people is traumatized. We had a massive increase in PTSD in Cordova, as well as general anxiety disorder, and, of course, this trickled down to the kids. We’re very tight with the children here, and we have always taught them as a community, not just as individuals. Some of these kids own fishing boats when they’re 15 and 16, and it’s the same thing with the native people of this region, with an emphasis on subsistence harvesting, sharing and celebrating resources. We don’t have ageism in Cordova, it’s a very fluid sharing of life across the generations.

So, the adults here were plunged into this situation, and the kids were, as well. The younger generation saw their mothers and fathers change drastically. This external, financial hardship ate people up internally, and the stress manifested in all manner of horrible things. People stopped visiting their friends and family members. Divorces and suicides went up. It was an ongoing disaster.

How did you begin to recover?

After our fish runs collapsed, we had nothing more to lose. When you reach that point, it’s very freeing … you have only each other. You look around at people, your neighbors, and you say, “What are we going to do?” There were groups of people who sat down and started to talk with each other about the possible solutions, the changes we needed to make to our economy and in our own emotional lives.

We had to rebuild our whole reality. Eventually, the way to mitigate this kind of harm is to shift people from victim to survivor mode. We inadvertently created what the sociologists came to study and call “peer listening circles.” This same approach was then used with the survivors of Katrina.

We began to form nonprofit organizations to deal with the grief, the cultural and social damage. It started to draw us out of this bubble of misery. We began to figure out how to diversify our economy without opting for short-term solutions. There were, for instance, proposals to strip-mine, which were ultimately rejected because we would have trashed our chances for future fisheries.

Instead, we began working on building a sustainable economy, and realizing that this is about getting off oil. In order to have a livable planet and pass something onto the next generations, we absolutely have to transition off oil. There’s no other choice.

Out of that effort came “The Copper River Watershed Project” to support the growth of local fishery, sustainable forestry and tourism over 26,500 square miles, encompassing one of the last, intact watersheds in North America. Among many other goals, we sought to protect salmon and upriver habitat from widespread clearcutting.

In March, it will have been 20 years since the spill. Last year, the U.S. Supreme Court slashed the restitution that Exxon was to have paid spill victims and their surviving families, from $5 billion to just $507 million. How do the oil spill survivors feel about this, and what are the broader implications of the court decision?

It was devastating. That’s just 10 percent of the original award, and for the survivors, it will result in bankruptcies, foreclosures, and people having to sell their homes and move away.

The jury didn’t pull $5 billion from the air. They determined that this was the amount of one year’s worth of net profit for Exxon, and that’s what it would take to punish the corporation for the damage to our community. More than 6,000 people eventually lost their livelihoods because of the spill.

What the Supreme Court did was to decide that a one-to-one ratio of compensatory damages was just punishment under maritime law. So, Exxon’s “punishment” was reduced to four days of net profit, instead of one year’s worth. For them, this is not punishment. It’s the victory of “corpocracy.”

As for the broader implications, this is a crucial question for our times right now. We need to see how it was, historically, that this flagrant corporate greed was allowed to triumph.

When this country was founded, people were still considered property. It took two popular uprisings to eventually drive through the constitutional amendments to determine that, legally, people are not property. Now, the pendulum has swung in the other direction, and we have made property and corporations equal to people, in the eyes of the law. By we, I mean the federal judiciary, and what I consider to be an informal, backdoor amendment to the Constitution through [subsequent] judicial interpretation of an 1886 U.S. Supreme Court decision [Santa Clara County v. Southern Pacific Railroad Company], which has resulted in the idea that due process and equal protection should be extended to corporations, as though they were individual citizens.

Since 1886, corporations have taken this and run with it–and run right through the First Amendment, as well, so that money equals speech. More money, more speech, and that has enabled the corruption of our entire election process, our whole political process. The usurpation of rights intended for people has also run right through their Fourth Amendment, prohibiting warrantless search.

For instance, if you’re a meatpacker and there are questions of OSHA violations, or if you’re a corporate player in an industry that is plagued with unlawful air or water pollutants and the EPA wants to take a closer look, [government inspectors] can’t just barge in. They actually have to have a warrant now, and let the corporation know that they’re coming, as though the corporation were a person. How many corporate criminals are you going to catch if you warn them that you’re coming?

We, the people, need to say, “This has gone too far.” And we must drive in what I propose as the 28th Amendment, to strip corporations of this false “personhood.”

For too long, we have allowed our laws, this concept of “corporate rights,” to trump human rights. We don’t have disposable people or a disposable planet. Corporations, in an unchecked run to maximize profits, are trashing lifestyles, cultures and ecosystems around this planet and, in the process, they are eroding the human relationships that form the basis for a civil society.