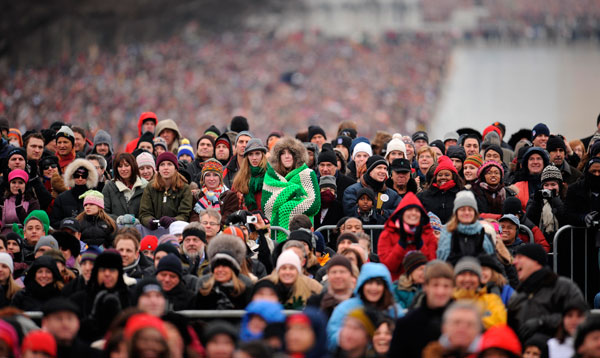 ‘We tried to consciously have people do more dispassionate, third-person observations, and by focusing on very small things, we were going to take them out of the ruling rhetoric of the day.’

On Jan. 20, about 2 million people gathered at the National Mall in Washington, D.C., to witness Barack Obama become the 44th president of the United States. Nearly 40 million more Americans watched the event on television, as did millions more around the world.

Most of these people were intensely focused on the Capitol dais, particularly from noon to 12:30 p.m., when Obama gave his inaugural address. But for a select few in D.C., across the nation and around the world, the object of fascination was not Obama, nor his words, nor the exact moment of his inauguration, but rather the millions watching him, and what they said and did throughout all of Inauguration Day.

These observers were participating in a project called Januarythe20th, a modern-day update of the 1930s Mass Observation movement, which enlisted England’s working- and middle-class people to observe and document, as objectively as possible, the happenings of the world around them.

Ultimately, Januarythe20th received submissions from more than 100 observers, some embedded within the Mall’s massive throng, others filing from far-flung locations like Argentina, New Zealand, U.S. Army Camp Speicher (outside Tikrit, Iraq), and Kisumu, a port city on Lake Victoria in western Kenya, where one observer wrote:

First people really feasted even though there is an outbreak of hunger, a big screen was set up in Kenyatta Sports Ground Kisumu to show the event live from Kogelo and Washington, D.C. One had to buy a daily metro newspaper to access the screen. Business was booming in Kenyatta Sports ground and even those who did not [know] how to read were forced to buy papers just to see the pictures. T-shirts with Obama’s portrait were in hot demand with one going at ksh500 [roughly $6.64].

When Obama recognised a small village [Kisumu] where his father was born, there was loud cheering as they view Obama as their own.

The original Mass Observation movement was created in 1937, the brainchild of a quirky, brilliant and oft-bickering trio: Charles Madge, an established poet and proud member of the Communist Party; Humphrey Jennings, a painter, silk designer and documentary filmmaker; and Tom Harrison, described by the Oxford Dictionary of National Biography as a “flamboyantly unacademic” anthropologist who liked to claim that, while living on a South Pacific island in the mid-’30s, he had partaken in cannibalism. (His biographer casts doubt on the boast’s veracity.)

Through the use of monthly “day-surveys” (diaries taking note of a single day), Madge, Jennings and Harrison charged their observers “to collect a mass of data without any selective principle.” The goal, in the words of the first of Mass Observation’s frequent manifestos, was to create an “anthropology of ourselves” that would describe daily reality “in simple terms to all observers, so that their environment may be understood, and thus constantly transformed.”

Five months earlier, King Edward VIII decided to abdicate his throne rather than forgo his marriage to Wallis Simpson, an American socialite whose previous divorces made her an unacceptable Queen, according to the Church of England. The resulting furor and much-ballyhooed ceremony of George VI’s coronation were perfectly suited for Mass Observation, Madge and Jennings wrote in another manifesto, as they offered “millions of people who passed their lives as obedient automata of a system” the chance to make sense of this fundamental break from the past.

For Eric Benson and Justin Nobel, two freelance journalists and the creators of Januarythe20th, Obama’s inauguration offered a similar opportunity to examine what happens when people take part in a radical transition.

“This is a time of change. Ideas are changing, old ideas are being rejected and people are trying to move forward with new ones,” says Nobel, 27. “And who better to learn it from than the people?”

Fearing that the event’s meaning would be cheapened by what Benson, 24, terms the “pre-packaged political language” of the mass media, the two saw Mass Observation as a needed remedy.

“A lot of people were happy–including both of us–about Obama being inaugurated,” says Benson. “But if we were to just ask people for their thoughts on Inauguration Day, probably all we would get would be, ‘It’s so wonderful that Obama’s taking the office, it says so much about our country’s ability to remake itself, and I’m so inspired, and isn’t it great?’ So we tried to consciously have people do more dispassionate, third-person observations, and by focusing on very, very small things, we were going to take them out of the ruling rhetoric of the day.”

Upon undertaking the project, they quickly realized that Mass Observation was in many ways a precursor to New Media.

“This idea,” Benson says, “of 200 anonymous observers, citizen journalists, recording little things has a parallel with some of the better aspects of the blogosphere.”

It also dovetailed neatly with the new technologies. Through the use of e-mail, Twitter and social-networking sites, Nobel and Benson were not only able to spread word of the project–“we had no idea kindergartners were going to contribute,” Nobel says–but to instantly receive and post observations, giving a palpable immediacy to their project.

The hundreds of observations are now archived at Januarythe20th.com, where they can be searched via national or international region. Yet diverse as the geographical correspondents were, the observations themselves are even more so. They range from overheard snippets of dialogues, to diary entries, to full-fledged narrative reportage, while content-wise, some focus specifically on the inaugural and others seem wholly uninterested in it.

It was important, Nobel says, to “observe things that had nothing to do with the inauguration, but were happening on that day just because they’re always happening: birds eating at a feeder, a line of taxicabs, people in a room not talking about the inauguration. Our fantasy with this was that if you really have this collection of things that were going on throughout the day, it creates this picture which is far more powerful than a couple reporters going out and interviewing a couple people.”

The final result is a mosaic of complex humanity, in which Obama’s inauguration can simultaneously be invested with profound meaning and none whatsoever. It’s a sense perhaps best conveyed in the following observation, submitted from Salvador, Brazil:

A mother of three grown children cooks meat stew in her apartment on the coast of northeast Brazil. Live coverage of the pre-inauguration buzz has just come onto one of the three broadcast channels she barely receives on her huge flatscreen TV.

“Do you like Obama?” she asks me in terse Portuguese, without waiting for an answer. “I think he’s great. He has love; you can see it in his face. And when a person has love, they can help people change. It’s a spiritual virtue.”

She looks at the broccoli and tofu stir-fry I’m making. “That looks gross,” she says, and gets back to pounding her meat.