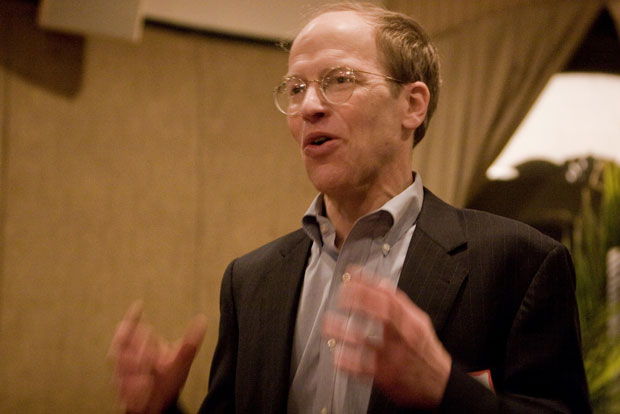 Tom Geoghegan, shown here at a fundraiser in Washington D.C., is running for Congress in Illinois' Fifth District. (Photo by Lindsay Beyerstein)

Amid a crowded field of Democratic contenders, Tom Geoghegan stands out.

Can a brainy progressive candidate parlay volunteer workers and a web-fueled campaign into victory over better-known and better-funded conventional Chicago Democrats?

On Tuesday, Democratic primary voters face a choice for a new U.S. Representative in Rostenkowski’s old district–recently vacated by Obama’s new chief of staff, Rahm Emanuel–between a brilliant independent progressive intellectual and a handful of legislators with strong organizational links, a veneer of independence, and little indication of profound progressive commitment or intellectual imagination.

The contest also tests the ability of a volunteer, ideological network–backed and partly funded by liberal blogs and other web-based organizations–to take on better-funded campaigns with traditional party and union organizational backing.

The intellectual in the race is Tom Geoghegan (pronounced “gay-gun”), a crusading lawyer for working people and ordinary citizens, a quirkily independent thinker, and a brilliant writer (a contributor to many publications, including In These Times, but also author of several acclaimed books, including Which Side Are You On? Trying to Be For Labor When It’s Flat on Its Back).

The Democratic Party made no endorsement, but Fritchey came close. (He has support from several ward organizations, and may have preferred the appearance of independence from the machine). Mayor Daley is neutral. Among their many backers, Quigley has support from the two big city dailies, and Feigenholtz has support from Emily’s List, reflecting her strong prospects to win as one of only two women in the primary with a heavily female electorate.

Geoghegan’s lifelong work as a lawyer for unions and working people might seem to make him a labor favorite, but he has picked up only a few endorsements, such as from nurses’ unions (who like his uncompromising support for a single-payer, Medicare-for-all national health insurance plan) and a big Teamster local (which reflects Geoghegan’s willingness to support union dissidents fighting for reform and democracy, not a popular position with some union leaders).

Fritchey has the most labor support, including the Chicago Federation of Labor, but the state’s Service Employee International Unions (along with a couple others) have provided Feigenholtz both people and a major independent expenditure.

Many unions wrote off Geoghegan as unelectable. They also did not have a history of relationships with him, whereas Fritchey had done many of them favors, and their support is part payback for his service, part conviction that he will listen to them. Both Feigenholtz and Quigley have more often crossed labor, angering public employee unions, in particular the big American Federation of State, County and Municipal Employees (AFSCME). Despite claiming to be a reformer, Quigley supported a county budget that included draconian job cuts while protecting political patronage workers. And Feigenholtz, AFSMCE claims, supported social services but not the workers who provided them. But all three might be expected to vote as cautious, uninspired liberals in Congress.

Geoghegan, on the other hand, is a bold thinker, inspired by what European social democratic parties and unions have accomplished and unapologetic about the role of government in promoting social solidarity and protecting ordinary citizens. To take only one example: At a time when even some Democrats talk about “entitlement reform” that involves cutting Social Security benefits, Geoghegan argues for increasing them. He points out that public pensions in most western European countries provide, on average, between 65-70 percent of working income, while Social Security provides not even 40 percent.

Can a brainy, creative, progressive candidate parlay volunteer workers and a web-fueled campaign into victory over better-known, better-funded, organizationally based conventional Chicago Democrats? The odds are definitely against him, but the odds were also against Obama in his Senate race four years ago.