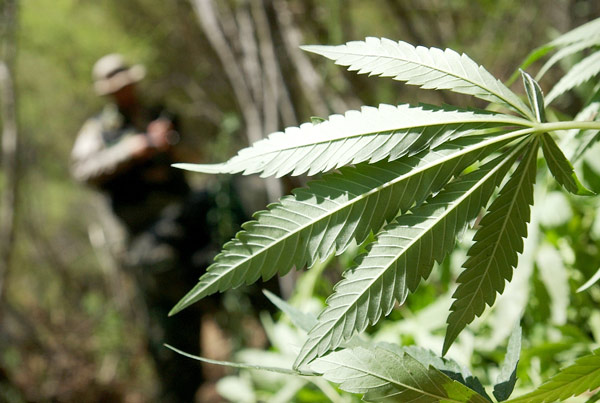 Raids such as this one--on a marijuana garden on Sept. 4, 2002, in a remote area of Annapolis, Calif.--might soon be a thing of the past.

Obama’s pick to head ONDCP is better than your average drug czar.

Kerlikowske let stand a directive that marijuana-related arrests should be the lowest priority for the Seattle Police Department, in accordance with a successful 2003 Seattle voter initiative.

But Kerlikowske isn’t just any urban police chief. He’s the top cop of a city with a progressive reputation on several drug-related matters, including needle-exchange programs and marijuana possession laws.

Kerlikowske has a reputation as a levelheaded and effective leader, having served as police chief in three other cities–Buffalo, N.Y., Port St. Lucie and Fort Pierce, Fla.–all of which recorded decreases in serious and violent crime during his tenure.

Although Kerlikowske’s opinions on drug policies reforms are still largely unknown, he differs from the last drug czar, John Walters, in many ways.

For one, the police chief has not tried to interfere with Seattle’s needle-exchange programs. For another, Kerlikowske is on the record as someone who believes that safer, healthier communities require stricter gun controls; the restoration of voting rights to ex-prisoners (as well as re-entry programs); community-involved policing; and alternatives to sentencing for nonviolent drug offenders, especially in the form of drug courts.

In his eight years in Seattle, Kerlikowske has shown interest in outreach programs in neighborhoods with high concentrations of drug users. In addition, under his tenure, local police have largely left alone Seattle’s medical marijuana users and providers, as well as the hundreds of thousands of attendees at Seattle’s annual Hempfest, the largest such event in the country.

And in what could be the most controversial portion of his Senate confirmation, Kerlikowske let stand a directive that marijuana-related arrests should be the lowest priority for the Seattle Police Department, in accordance with a successful 2003 Seattle voter initiative, I-75.

“He recognizes that we can’t arrest our way out of these problems,” says Alison Chinn Holcomb, drug policy director for the American Civil Liberties Union (ACLU) of Washington. “Seattle is a leader in exploring alternatives to reliance on criminal sanctions as the primary response to drug use and abuse, and Chief Kerlikowske has been someone that has allowed that exploration to go forward.”

By contrast, while directing the ONDCP, Walters made it clear he wasn’t interested in considering alternatives to the status quo. “Whatever challenges await, President-elect Obama will not have to reinvent the wheel when it comes to keeping a lid on the use of illegal drugs,” Walters wrote in a Wall Street Journal op-ed on Dec. 5. “Our policy has been a success–although that success is one of Washington’s best kept secrets.”

But the National Academy on Public Administration (NAPA) disputes that assessment. In its recently released Senate-commissioned report, the nonpartisan coalition found that Walters and his predecessors consistently relied on questionable, single-source data and unscientific research in the ONDCP’s media campaigns.

NAPA also reported that, under Walters, the ONDCP had a disproportionate number of GOP political appointees and people working supervisory roles. (Even potential interns were asked how they voted in the presidential elections during interviews, according to NAPA). If confirmed, Kerlikowske will inherit a poorly staffed office. (More than 25 percent of the ONDCP’s employees left in January.)

Ethan Nadelmann, director of the national drug policy reform organization Drug Policy Alliance, says Kerlikowske is up to the task. “Kerlikowske isn’t going to be in this alone,” he says. “President Obama has made a very public commitment to certain reforms, including his support for federal funding of needle exchange and an end to the crack/powder cocaine disparity.”

Attorney General Eric Holder, who worked with Kerlikowske from 1998 until 2000 at the Department of Justice, announced in late February that the Obama administration would not support continued Drug Enforcement Agency raids on medical marijuana dispensaries.

“Where [Kerlikowske is] going to be stuck is what to do about Afghanistan and Mexico, among many other countries dealing with high levels of violence and drug trafficking,” Nadelmann says.

Kerlikowske is also likely to stumble if he tries to address racial profiling, disproportionate incarceration or the police brutality that have been intrinsic to the drug war.

Although his personal outreach to black community leaders has been noteworthy, some critics say Kerlikowske has done little to lessen the frequency of racial profiling and gang violence. In fact, in 2007, the Seattle NAACP called for his resignation, accusing Kerlikowske of covering up instances of racial profiling, false arrest and abuse at the hands of Seattle police officers.

Since I-75 passed, the ACLU’s Holcomb says the number of whites arrested and referred for prosecution by the Seattle Police Department has dropped significantly, whereas African Americans have not fared as well. Black residents make up only 7.8 percent of Seattle’s population, but they were arrested for marijuana “incidents” at roughly 12 times the rate of non-Latino whites in 2006.

Any optimism should be cautious and considered, Holcomb says: “This is the most hopeful nomination that we’ve seen in a long time, but that doesn’t mean that we should get too comfortable.”