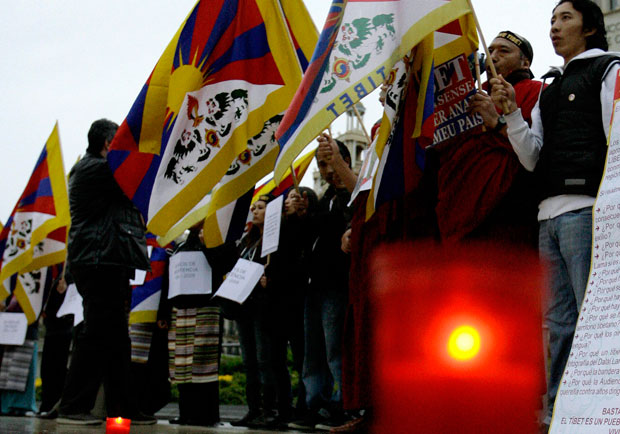 On March 28, Tibetan monks in exile and other pro-Tibet supporters stage a candlelight vigil as part of an anti-Chinese demonstation at the Bouddhanath Stupa in Kathmandu, Nepal.

Free Tibet? Not so fast.

How should we celebrate “Serf Liberation Day,” the new holiday invented by Beijing to mark the 50th anniversary of the takeover of Tibet? Waving flags? Serving chips and dip? Razing a few Buddhist temples? Collectivizing property?

China’s latest, clumsy bit of propaganda hopes to counteract the inevitable commemoration of the exile of the Dalai Lama. The new Chinese holiday seems even weirder, since no one in the West has used the word “serf” with a straight face in about 100 years.

According to a January release from the Xinhua News agency, China seeks to remind “all the Chinese people, including Tibetans, of the landmark democratic reform initiated 50 years ago.” “Since then,” according to Pang Boyong, deputy secretary of the 9th Tibet Regional People’s Congress, “millions of slaves under the feudal serfdom became masters of their own.”

While China’s doublespeak is frequently acknowledged in the West, the Tibetan exiles have also delivered a steady stream of half-truths over the last 50 years. The Dalai Lama and his own propaganda machine have been effective in setting the parameters of discussion and reflection in the West. Most Americans know one simple story, when it comes to this vexed region:

The reality is more complicated. If the China-Tibet issue is to be resolved, then misinformation about the takeover–and subsequent events–needs to be cleared up.

The West confuses the Dalai Lama’s role as a charismatic religious and political leader with the cause for independence: Isn’t the exiled leader, we assume, automatically calling for his return to power and an “occupiers get out” solution?

No, he is not. He has a much more pragmatic position. He wants an ethnically controlled, autonomous region together with the massive benefits of being part of China.

Equally confused, Beijing blames “the Dalai Lama’s clique” for the protests and embarrassments in the lead up to the 2008 Olympics–despite the fact that the Dalai Lama explicitly urged the pro-Tibetan protesters to demonstrate moderation, peace and a “middle way.” More than just a diplomatic move, however, the Lama’s moderate view reflects his belief that Chinese presence in Tibet has been, on balance, positive for the material development of the region.

If it wasn’t for China, Tibet would have no infrastructure or modern development to speak of. Roads would still be rudimentary; education would be largely theological; drinking water and medical facilities would be closer to the medieval condition they were in during the 1940s.

It was in the early ’40s, before Mao Zedong’s People’s Republic of China (PRC), when Gen. Chiang Kai-Shek argued that Tibetans were Chinese–bound by race and blood, differing only culturally from Han, the country’s majority ethnic group.

When the current Dalai Lama, who was born in 1935, was first brought to the capital of Lhasa as a boy, the local Amdo monasteries and warlords had to be paid substantial fees before they would allow him to leave his hometown. Temporal power and religion were longstanding partners in Tibet.

In the ’50s, Tibet and the Dalai Lama enjoyed peace and prosperity under the Seventeen-Point Agreement incorporating Tibet–as a minority region–under the flag of the PRC. The Dalai Lama even spent a year in Beijing, learning Mandarin, and writing poems about the greatness of Chairman Mao.

But in the late ’50s, as part of the increasing communization and collectivization on the mainland (culminating in Mao’s Great Leap Forward), Tibetan landlords began seeing their property confiscated and redistributed to workers. This caused increasing class struggle. In outlying regions, like Amdo and Kham, rebel movements emerged.

According to Frank Holober, planner of the CIA Tibetan Task Force, the CIA “was hoping that the Dalai Lama would somehow fit into this international void and sort of be the ‘Pope of the Buddhists,’ if you will–in effect, broaden the anti-communist aspect of Buddhism everywhere.” At the time, the Lama was not particularly receptive, although it is interesting that, in recent years, he has become the de facto “Pope of Buddhists.”

By 1958, the Chinese were scuffling with two-dozen rebel groups that were financed, trained and outfitted (albeit badly) by the CIA. The Chinese were understandably worried that imperialist powers would use Tibet–just like the Japanese had used Manchuria–so, they quashed the rebellion in the outlying regions, leading many of the dissidents to retreat to Lhasa where they fostered anti-Chinese sentiment.

By 1959, the Dalai Lama found himself in political pincers. The rebels wanted him to sanction their rebellion, and the Chinese wanted him to hold the line on the Seventeen-Point arrangement. Both the Chinese and the rebels were afraid that the “middle-way” Lama might adopt the enemy position.

In March 1959, things came to a head at the Lama’s Summer Palace, where rebels and Chinese soldiers surrounded the compound in a standoff. Two or three mortar shells were fired, by whom it is unclear. The Dalai Lama fled Lhasa, aided by CIA-trained operatives, and made his way to Dharamsala, India.

After that, things changed radically. When he arrived in Dharamsala, the Lama repudiated the Seventeen-Point Agreement. The Chinese put down the rebellion and exerted political control of the region. They also collectivized property in the inner regions of Tibet, re-educated (and in some cases executed) landlords, and incorporated Tibet into the economic scheme of Mao’s Great Leap Forward.

What followed in the ’60s, Westerners often misunderstand as China targeting the Tibetan people and culture. In fact, China “attacked” its own people and culture with famine-inducing agricultural policies and the Cultural Revolution–only, now, Tibetans were considered part of China and therefore suffered the same miseries as the Hans, Huis, Manchus, Uyghurs and Zhuangs.

Fast forward to 2008, when the Olympics were protested and Tibetans in Lhasa rioted, and then to this past March, when we had another round of baiting and taunting.

On March 10, this year, the Dalai Lama gave a speech claiming that Tibetan language, culture and religion were “nearing extinction” and that the Chinese government had made Tibet into “a hell on earth.”

While Tibetans probably won’t be celebrating Beijing’s new Serf Liberation Day, it is also clear that Tibet is not “hell on earth.”

Beijing’s current policy is indeed hostile to Tibetan worship of the Dalai Lama and theocracy generally, but most other aspects of Tibetan culture, including Buddhism, are now celebrated in the mainland as tourist attractions for travelers of the Qinghai Railway.

Here, then, is a modest map forward, steering toward somewhere between “hell” and Shangri-la:

The Dalai Lama should realize that he has no real political leverage insulting the Chinese, and he might do well to be quiet for a while. China is a “face culture” and you do not get traction by causing the Chinese to lose face every time you speak. For their part, the Chinese should stop demonizing the Dalai Lama in their press. Even if the Lama is a thorn in their side, the vilifying attacks play badly to the international community, who see only a likable monk of Gandhi-like piety.

It is unlikely that the Dalai Lama will ever come to power again in Tibet, as there is too much acrimonious history between Beijing and the exiles.

But there is something realistic worth pursuing. The two sides could sit down and negotiate an honorable accord, in the spirit of the Seventeen-Point Agreement, ensuring greater representation of ethnic Tibetans in political positions in Lhasa. The real issue worth working toward is the fair distribution of economic, educational and political opportunities for both the Tibetan people and the more recent immigrant Han population.

Stephen T. Asma is a professor of philosophy at Columbia College in Chicago. He is the author of numerous articles and books, including On Monsters: An Unnatural History of Our Worst Fears and Why I am a Buddhist (both forthcoming in 2009); The Gods Drink Whiskey: Stumbling Toward Enlightenment in the Land of the Tattered Buddha; and Stuffed Animals and Pickled Heads: The Culture and Evolution of Natural History Museums. His Web site is at www.stephenasma.com.