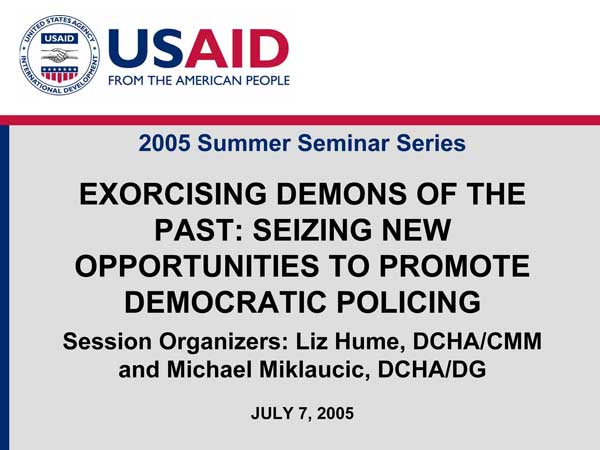 “Democratic policing” is back on Washington's PowerPoint agenda.

The Obama administration plans a new round of ‘public safety’ programs in Latin America.

In reality, the United States used the Office of Public Safety to control the behavior of foreign police for its own political ends.

At an April 7 press conference, President Barack Obama’s special advisor for the Summit of Americas Jeffrey Davidow announced the administration’s new plan to provide U.S.-funded “public safety” programs to other governments throughout the Western Hemisphere. U.S. public safety programs are necessary now, Davidow said, because “Latin America [and] the Caribbean are witnessing an increase in criminality and are having difficulty confronting this because of judicial and police systems that need assistance, need more training, need more equipment.”

The United States has pursued similar policies in the past–with disastrous results. The first such projects were organized in the wake of the Spanish-American War, when the United States was keen on policing its newly won satrapies in the Caribbean and Pacific.

Initially, these “security” initiatives were enforced through direct U.S. military occupation. It wasn’t until 1954 that a separate “civilian” agency specializing in police aid was established: the Civil Police Administration (CPA), which began operating in Guatemala after the 1954 CIA-backed coup that removed the democratically-elected government of Jacobo Arbenz.

In 1961, President Kennedy formed the U.S. Agency for International Development (USAID) and rolled the CPA into the new agency, renaming it the Office of Public Safety (OPS). Official literature describes OPS’s goal as the creation of a “carefully balanced program of technical advice, training and equipment.”

In reality, the United States used OPS to control the behavior of foreign police for its own political ends. The goal of U.S. public safety programs was to unify a country’s police and military under a central command–overseen by OPS advisors. Assassination, disappearance and torture were the tools of the OPS trade.

Within a few years, officers were operating out of U.S. embassies, police headquarters and safe houses in 15 Latin American countries. Eventually, OPS extended beyond the hemisphere, into Asia and Africa. But wherever the OPS went, brutality followed.

According to a Defense Intelligence Agency report obtained by the National Security Archives, during OPS’ operations in Guatemala in the early 1970s, the U.S.-sponsored security forces “quietly eliminated” what the Defense Department called “terrorists and bandits.” Under OPS oversight, an estimated 200 people were killed in the San Marcos Department alone, and at least 30 more in the capital city.

Things began to change when reports in the alternative press revealed the oppressive and brutal activities of the OPS-backed police forces. In the summer of 1974, with Washington still reeling from allegations about the CIA’s malfeasance uncovered by the Church and Pike Committees, Sen. James Abourezk (D-S.D.) introduced an amendment to the Foreign Assistance Act that prohibited “police training or related programs in a foreign country.” The amendment passed and, for a few years, U.S. “public safety” programs ended.

However, by the 1980s, the Kissinger Commission Report revived the idea, recommending that the United States support foreign police forces, particularly in Latin America. By 1986, the Justice Department had formed the International Criminal Investigations Training Assistance Program (ICITAP), using state department funds to train police in countries like Guatemala.

Congress authorized USAID to get back into foreign policing in 2002, with a “community-based” police assistance mission in Jamaica and in El Salvador in 2003. OPS had operated in both countries, but this time the USAID program could not provide support for lethal weapons and technology or assist intelligence and surveillance operations. Unlike OPS, the new program would provide only money and know-how, not hardware.

These limitations were eroded in 2008 with the passage of the Mérida Initiative. The agreement nearly completed the dismantling of the 1974 prohibition of U.S.-funded policing programs. Under the guise of the war on drugs, the initiative gives $400 million to the Mexican government and $65 million to Central American countries, some of which was to be spent on police training. Predictably, reports of human rights violations have surged. In July 2008, a U.S. security firm instructor was even caught on tape training Mexican police in torture techniques.

Obama may not understand the dangerous waters his administration is drifting into by expanding “public safety” policing programs. If the history of the OPS and similar projects are any indication of what will come, U.S. policing initiatives in Latin America and elsewhere could result in violence and political repression.

Financial support for this story was provided by the Fund for Investigative Journalism.