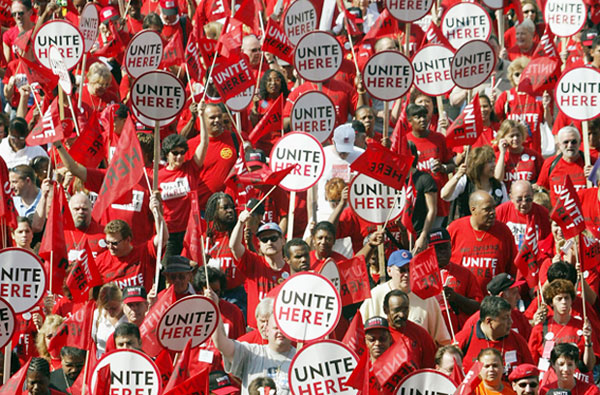 In July 2004, during happier times, more than 1,500 UNITE HERE workers marched through Chicago to the Congress Hotel.

Can a Union Divided Stand?

UNITE HERE dissolves in conflict … with a little help from SEIU.

Supporters of UNITE HERE hospitality division president John Wilhelm claim that SEIU has tried to disrupt or take over eight unions since 2002.

On February 1 Andy Stern, president of the Service Employee International Union (SEIU) met with John Wilhelm, president of the hospitality division of UNITE HERE, at a Washington, D.C. restaurant. They were former allies in the 2005 breakaway from AFL-CIO to form the Change to Win (CTW) labor federation.

But it was not a pleasant dinner.

Wilhelm says Stern handed him a letter addressed to him and UNITE HERE general president Bruce Raynor, who were fighting over whether their union should split. Stern said he wanted all, or at least part, of UNITE HERE to merge with SEIU. “Andy, you shouldn’t be interfering,” Wilhelm recalls saying. Stern replied, “I’m going to take Bruce in, and we’re going to take your jurisdiction and assets.”

“That’s not happening, Andy,” Wilhelm said. “We have worked cooperatively, but you’re not taking over our union.’ “

UNITE HERE formed in 2004 when HERE, the hotel and restaurant union, merged with UNITE, the garment and textile union. But last year, tensions built between Wilhelm and Raynor. Neither a special union committee nor an outside mediator alleviated them.

Since then, the conflict has intensified. Wilhelm’s side depicts Raynor as an unaccountable autocrat who cut bad deals with employers to boost membership. Raynor’s side calls Wilhelm a spendthrift who has not organized fast enough.

Wilhelm says Raynor–realizing he could not win control of the union at the June 2009 union convention–started a “war” for control over union assets, members and policies after the 2008 presidential election. Since then, the conflict has escalated at the union’s general executive board and its regional “joint boards,” as well as in the federal courts.

By May, Wilhelm and Raynor were fighting over control of the New York headquarters and Raynor’s power as president. On May 29, Raynor resigned before UNITE HERE held hearings on the allegation that he had not fulfilled his fiduciary duties as union president.

Raynor insists the fight was an internal UNITE HERE battle, but Wilhelm argues it was “an attempt by SEIU to do a hostile takeover of our union” and the plan was “being hatched well before [February 2009].” Actually, the fight is both internal and external.

In the February letter, Stern wrote he had wanted UNITE and HERE to join SEIU even before the 2004 merger. But Wilhelm and Raynor, who became friends after working together on a Yale hospital strike, thought they had a winning combination: UNITE had resources–including ownership of Amalgamated Bank–but a jurisdiction depleted by imports and offshoring of apparel and textile jobs. HERE organized workers in growing industries, like hotels and food services, where jobs could not be exported.

But Raynor says the fusion “failed” because organizing has not grown enough. He blames HERE’s “ideological” model, which focuses on building large, internal committees of union supporters at worksites–sometimes a costly and plodding strategy. “We’ve got to organize on a larger scale, engage more workers and take risks,” he says. “Long, bitter battles over one hotel are not productive. We have to organize over chains and cities as opposed to single units, and, where we can, find companies willing to partner, and, if not, fight them.”

But Wilhelm claims the merger succeeded. He argues much of UNITE’s pre-merger growth came from raids on or incorporation of laundry and other unions, skewing any comparison to more recent organizing. By contrast, after the merger hotel organizing grew as new contract victories opened up opportunities in the hotel industry.

The two sides have argued pointedly about the success of the joint SEIU/UNITE HERE effort to organize food service workers under the Service Workers United banner. Raynor praises the campaign as an example of the potential of organizing with SEIU. Wilhelm says Raynor exaggerates membership nearly threefold and ignores the inferior contracts that stemmed from Raynor’s negotiations with management to permit union growth.

But the split between Wilhelm and Raynor reflects more than arguments about successes and strategies. It is a toxic mix of conflict involving power, internal culture and the external influence of SEIU.

In March, 20 of the 22 former UNITE “joint boards,” or regional organizations, disaffiliated themselves from UNITE HERE in a much-disputed process of hasty votes. Workers had been inundated with mailings, phone calls, robocalls and personal visits that attacked UNITE HERE and urged disaffiliation. UNITE HERE says SEIU promoted the attack campaign (citing evidence like the repeated references to SEIU’s signature purple color in messages). SEIU and Raynor deny these charges.

UNITE HERE’s executive board declared the votes illegal, but the regional boards that had disaffiliated quickly called a convention on March 21 and formed a new union: Workers United. Two days later, the new union merged with SEIU.

Wilhelm agrees that workers can leave unions if they want, but only through a democratic process. But he says they cannot take assets of the international union with them, including, he argues, the union’s bank and headquarters. And Wilhelm strongly objects to another union interfering with UNITE HERE or organizing in its core industries. Since 2002, according to his supporters, SEIU has tried to disrupt or take over eight other unions

Since the split, both sides still fight for control of UNITE HERE’s assets. But the heart of the fight is the right to organize hotel and food service workers in the future.

Until May, United Food and Commercial Workers/CTW President Joe Hansen had tried to mediate a settlement. He proposed that UNITE HERE would retain hotels and gaming exclusively and the two unions would split food services. SEIU would retain Amalgamated Bank and the New York headquarters and pay UNITE HERE a cash settlement. Wilhelm agreed to these principles–albeit unhappily.

But Workers United/SEIU insisted on the division of hotel workers too. Raynor, who became president of Workers United after resigning from UNITE HERE, says that Workers United’s incorporation of some former HERE hotel members gives the union a legitimate right to organize in the industry. He proposes UNITE HERE and Workers United would organize hotel workers in different geographical regions. But Raynor says that Hansen’s plan can be the basis of a settlement and that he’s “willing to discuss” hotel organizing.

Through petitions, votes and organizing of members for direct action, UNITE HERE is contesting whether hotel workers want to be a part of Workers United. “Workers should decide what they want,” Wilhelm says. “And there needs to be a proper democratic process.”

UNITE HERE also argues that SEIU does not serve its current target industries adequately and thus does not need new organizing jurisdiction. According to a UNITE HERE study, based largely on SEIU and government data, SEIU represents less than 10 percent of hospital workers and 11 percent of nursing home employees. By contrast, UNITE HERE represents 19 percent of full service hotel workers and 48 percent of the gaming industry.

Despite its professed lack of interest, SEIU may be trying to bolster its finances by acquiring Amalgamated Bank through a merger. The union’s net assets fell from $76 million to $34 million between 2004 and 2008. SEIU is heavily in debt (which includes a loan from Amalgamated Bank last fall) partly to finance 2008 political activity, but also for its new Washington, D.C. headquarters.

On its own, Workers United could be a big money drain. A May 11 memo from the new union’s chief of staff Keith Mestrich detailed growing financial problems: The union only collects dues from 103,000 members–not the claimed 150,000–and it has yet to reach settlement over disputed assets with UNITE HERE. Plus, the union had to increase staff to win members’ support and, as the memo indicates, develop a strategy to start organizing hotels and “manifest the reality of a rival union in the hospitality industry.”

Most other union leaders likely share the sentiments of American Federation of Teachers President Randi Weingarten, who argued that the continuing fight is causing “collateral damage” to all unions with politicians and the public.

At a time when organized labor faces major challenges, including the passage of the Employee Free Choice Act, that’s not good news.