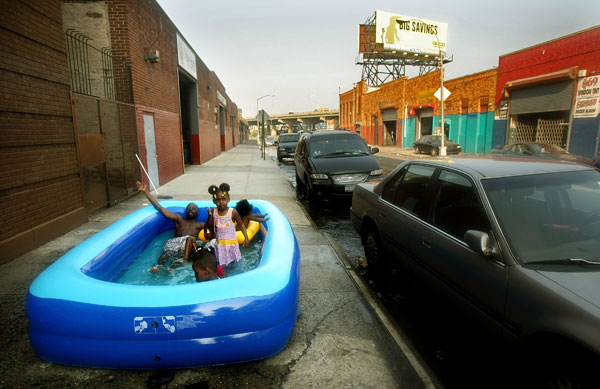 New Yorkers cool off in an inflatable pool in June 2008, in the Bronx. (Photo by Mario Tama/Getty Images)

Falling Through the Climate Gap

Poor Americans will suffer most from global warming.

Many families in Los Angeles face a perverse dilemma: Too poor to afford air conditioning, they can either try to cool off in dirty air or shut out the pollution and roast indoors.

In August 2005, Hurricane Katrina swept through New Orleans and laid bare the city’s shame: Deep racial segregation, intertwined with abysmal gaps between rich and poor, had left whole communities to drown in the storm’s grasp. The following summer, nature’s fury struck the opposite side of the country: California neighborhoods were pummeled with a tide of hot air. Continuing a long-term pattern of intensifying regional heat waves, the swelter coincided with a more than ten-fold increase in heat-related hospitalizations and a spike in emergency room visits. Like Katrina, the event was shadowed by class and color. According to a recent state-sponsored study on the public health impacts of climate change in California, the increased risk of death associated with rising temperatures is twice as high for blacks as it is for whites.

From floods to droughts, recent extreme weather events not only reveal the intensifying threat of climate change but also expose underlying social crises.

The intersection of climate and social inequity is often framed in an international context: Pacific Islands sinking into the ocean or ruined farmlands in Eastern Africa. But global warming is also afflicting American society along familiar fault lines of race and income. The poor and people of color–particularly those who have long borne the burden of industrial pollution in their neighborhoods–are on the front lines of global warming.

“The reality is, poor people always lived in the most environmentally vulnerable places–places that were vulnerable before the climate change problem made them worse,” says Elliott Sclar, director of the Center for Sustainable Urban Development at Columbia University. “The real problem in this country is we haven’t had a real serious discussion about the social equity issues connected to climate and environment. Sadly, too many people aren’t inclined to engage in that discussion.”

According to a May report on America’s “Climate Gap,” California cities share environmental vulnerabilities with poor populations around the world.

The report, focused on climate change in California, was published by researchers with the University of Southern California, University of California-Berkeley and Occidental College. It projects that climate change will exacerbate regional health disparities tied to industrial air pollution. In many areas, people of color suffer greater impacts from dirty air, because they are more likely than whites to live in communities heavily exposed to pollution sources­-like coal-fired power plants, oil refineries and transportation corridors.

The structure of many urban neighborhoods magnifies the effects of global warming. Communities that are thin on tree cover and dominated by dark-colored structures, such as gray high-rises and asphalt roads, are prone to the “heat island” effect: Surfaces absorb heat and raise area temperatures. Further, the prevalence of heat-trapping surfaces in a neighborhood correlates strongly with poverty and the proportion of people of color.

As seen in the uneven destruction wrought by Katrina, a community’s resilience is often determined by social privilege. Marginal populations tend to lack insurance and be neglected by emergency response and healthcare systems.

In a study of sea level rise along California’s coast, the Pacific Institute, an environmental think tank, found that the poor and people of color are disproportionately threatened by potential floods. Their vulnerability is heightened not only because of where they live, but also factors like limited English ability and lack of access to emergency transportation.

On top of natural catastrophe, the Climate Gap researchers found that climate change will impose an acute economic toll on struggling households–an injustice compounded by the fact that the poor contribute less to carbon emissions than do the rich. Extreme weather, along with growing demand for air conditioning, could drastically increase energy prices, making it harder for working-class families to cover the cost of electricity. Climate volatility could also lead to job losses in the farming and tourism sectors.

On the coastal town of Newtok, the Yup’ik Eskimos have followed their traditional ways for generations, but in recent years they watched their ancestral roots wash away. Floods and erosion corroded infrastructure. A warmer climate turned once-solid ground to muck and sunk homes into soft earth. The community worries about the disruption of fish stocks, their primary food source.

Newtok is working with the state on a plan to resettle on more stable ground. In the meantime, tribal administrator Stanley Tom says the community’s roughly 340 residents are caught in limbo.

“We’re deteriorating. Our morale is getting low–nothing’s really happening out here,” Tom says. “It is unfair, because we’re not producing all that pollution.”

Far south of Alaska, in Huntington Park in Los Angeles County, environmental and social vulnerabilities are locked in a dangerous synergy. The poor, mostly Latino city is dotted with industrial plants and crisscrossed with diesel truck routes. Robert Carbales, a 28-year-old organizer with the local advocacy group Communities for a Better Environment, says the political marginalization of immigrant households makes Huntington prime real estate for polluters.

Carbales–who grew up in the community and, like many others, suffers occasionally from breathing problems–says that on hot days, many poor families face a perverse dilemma. Unable to afford air conditioning, they can either try to cool off in filthy air or shut out the pollution and roast indoors.

Recalling the last heat wave, he says, “Folks were telling me, ‘We’ll either let these particles in or just suffer the heat wave.’ And folks just had to open the window.”

Robert Bullard, head of the Environmental Justice Resource Center at Clark Atlanta University, says the mainstream climate change debate focuses too heavily on reducing emissions, rather than the immediate impacts on disadvantaged communities. “A lot of the people in the environmental justice communities are saying, ‘We’re sick and dying prematurely right now from air pollutants,” he says. ” ‘We’re not talking 20 years from now, we’re not talking 2050–right now.’ “

Summertime brings a wave of oppressive heat over the South Bronx, scorching a concrete landscape dense with poor, largely black and Latino neighborhoods. But amid a sea of heat islands, on the roof of the drab county courthouse, a patch of grass and flowers stands out like an oasis. Known as a green roof, the miniature meadow is designed to absorb stormwater, deflect heat and cool the surrounding air.

A fusion of economic development and environmental protection, green roofs have cropped up across New York and other cities around the country. Sustainable South Bronx, a grassroots group leading the effort, aims to demonstrate how climate justice works at the community level. With government support, the organization has turned green-roofing into a job-creation initiative, training economically disadvantaged local residents as environmental maintenance workers.

Rob Crauderueff, policy director for Sustainable South Bronx, says dealing comprehensively with climate change goes beyond capping carbon. “Sustainability isn’t just about the environment,” he says. “It’s also about empowering residents throughout the city over their own futures and their own communities.”

Meanwhile in cap-and-trade Washington, environmental justice advocates waver between hope and frustration as lawmakers hammer out a climate strategy.

Environmental justice groups fear that the American Clean Energy and Security Act (ACES), which had narrowly passed the House and was awaiting action in the Senate as In These Times went to press, sidesteps the widening climate gap.

While the bill’s cap-and-trade framework is supported by mainstream environmental organizations like the Sierra Club, more radical environmentalists see its market-based scheme as a free ride for polluting industries. A nationwide emissions cap alone could mitigate global warming, but wouldn’t address the more localized impacts of “co-pollutants,” mainly smog, ozone and soot produced by power plants in addition to carbon. Activists argue that a federal climate policy that ignores the cumulative impact of all emitted pollutants will only deepen the toxic burden borne by poor, minority, “fenceline” communities.

Moreover, most of the emissions allowances in ACES are initially given away free to industry. Though the program provides some funds to help households cover energy costs, more stringent alternative proposals would tax emissions to generate public revenue. The bill also provides a generous pool of “offsets”–a controversial system that enables polluters to compensate for emissions by investing in separate mitigation measures, like forest conservation programs.

“What you’re saying [with offsets] is, ‘It’s fine, you can keep on polluting,’ ” says Bill Gallegos, executive director of Communities for a Better Environment. “If you plant a thousand acres of trees in Bolivia, it’s okay to keep polluting in these communities like Wilmington, Calif., like New Orleans, like Oakland, where there’s a lot of poor people of color.”

In its current form, ACES would undercut the Environmental Protection Agency’s authority to regulate carbon emissions under the Clean Air Act, which community advocates have historically relied on to hold local polluters accountable for soot and smog emissions.

Daphne Wysham, co-director of the Sustainable Energy and Economy Network at the Washington, D.C-based Institute for Policy Studies, says the proposed weakening of Clean Air Act regulations shows that the energy industry lobby has hijacked the ACES legislation.

“The people in the immediate vicinity of a lot of these power plants will see their health and environmental rights traded for this overall cap being reached,” she says. Even that cap, she adds–an 80 percent reduction below 2005 levels by 2050–falls far short of the international benchmarks recommended by the Intergovernmental Panel on Climate Change.

Still, advocates managed to push through some equity-related provisions, including measures to boost investment in green jobs training. But it’s unclear how many green jobs will be directed toward underserved communities.

However the legislation plays out, the federal response to climate change will usher in structural economic shifts and alter land-use and public transportation policies. Activists see global warming as a platform to spur investments in social services, housing and infrastructure in ways that uplift marginalized groups.

Rachel Morello-Frosch, a professor at University of California-Berkeley’s School of Public Health and co-author of “The Climate Gap” report, says that as climate policy shapes social policy, “it’s going to be really important for public health advocates, civil rights advocates, mainstream environmental advocates, to make sure the climate gap is an essential part of the conversation on how we’re going to deal with climate change.”