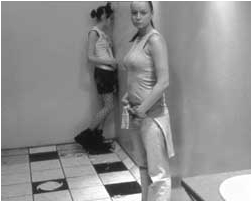 BY Joshua Rothkopf
Share TweetReddit0 EmailPrint
Morvern Callar gets at you through your eardrums. Its gifted young director, Lynne Ramsay, has described her second feature as a “headtrip,” and, for better or worse, the term sticks.

There’s great, trippy artistry at work here, particularly from sound designer Paul Davies and his mixer Tim Alban, carving intimate spaces from the quiet tones of empty rooms and bass-heavy rave rumblings alike. Wafting through all tomorrow’s parties is the title character, a Glasgow girl of the heavily eyelined brood (Samantha Morton)—and it should be said that most headtrip movies do have a certain inclination toward vacancy, even when it’s wrought with such subtlety.

Movies don’t have to be about much to work, though, and from Ramsay’s heightened sonic ambience a slender but arresting narrative begins to insinuate itself. (Alan Warner’s cult novel, smartly adapted by the Scottish director with Liana Dognini, would seem to require such sensorial nourishment in order to translate, as did Trainspotting.) Under the buzzing glow of a Christmas tree, Morvern is first revealed laying quietly next to the corpse of her boyfriend, a suicide. A computer monitor hums, displaying his final note. The dial tone coos as she lifts the phone but hesitates. Gifts are unwrapped with a roar of shredded paper: a crisp leather jacket, a lighter that snaps like a whip. Morvern plunges into a bath, does her eyes up like a raccoon. Finally: the crinkle of bills lifted from her dead boyfriend’s pocket (“Sorry,” she mumbles), and the gunshots of her platform heels echoing down the stairs to the evening’s pills and thrills.

If I’m making this all sound excruciatingly hip, à la the Bride of Tarantino, then I’m doing the film a disservice. Morvern Callar isn’t just cool, it’s downright arctic: Ramsay takes her alienation neat with rarely a chaser of glam. Like Pulp Fiction, her movie has a faintly self-congratulatory soundtrack of fringy refinement, sure to send the Stereolab club into E-phoria. But since most of it is heard through Morvern’s headphones (sometimes just as a tinny squawk), almost all the selections work wonderfully as spiky reflections of her cryptic thoughts. Call it the difference between Tarantino’s rocketing surf guitars and the musicbox lull of Aphex Twin. Morvern goes into the Morvern Zone a lot, tapping her toes on the coffee table, sipping on a cigarette, plugged into her private reverie. Ramsay is happy to let her go there; as a conductor of mood and tone, she’s so in control here that you just might miss that spurt of blood in the bathtub—Morvern’s messy disposal of her boyfriend. Yes, it’s a breakup story.

In a more ideal universe of statuette bestowal—one that wouldn’t forget to honor the most fearless of actors such as Jennifer Jason Leigh—Samantha Morton would be the princess waiting in the wings. Her Morvern is transfixing work, both frighteningly opaque and open like a wound, a breakthrough as intense as DeNiro’s in Taxi Driver. Morton has wowed us before: loose-limbed and hotwired in Jesus’ Son; outshining millions of dollars of special effects in Minority Report with just a shaved head and a haunted eye to “precrime.” But she’s never had the opportunity to go this deep. Morvern is a character built on expert denial; she allows her friends to believe that her lover has merely left her, that he’s “gone to another country.”

But Morton plays the lie like she needs to believe it even more than they do—it’s key to her dawning sense of liberty. (In many ways, that body lying under the tree is her real present.) Is her detachment a kind of thoughtful grieving, or its absence? Cagily, Morton never settles for one or the other, and her glossy-eyed indecisiveness makes for something unexpectedly magnetic.

Much of this should be attributed to Ramsay, who seems to know exactly how close to hover, precisely how sharp to focus, just how far to press Morton’s intuitiveness until it hits its peak transparency. (Her first feature, the relentlessly bleak Ratcatcher, was the announcement of a major talent and the most commanding debut in a decade.) She uses Morton’s face as an icon, and seems to have inspired the same openness in new comer Kathleen McDermott, a real discovery, playing Morvern’s best friend, Lanna.

A flirt and party girl given to explosive shrieks and giggles, Lanna is almost the exact opposite of Morvern, yet there’s a sweet plausibility to their closeness. When Morvern surprises her at work with the news that she’s booked them a holiday in Spain (after draining her dead boyfriend’s checking account and sending off his unpublished novel to a bookhouse under her own name for good measure), Lanna looks like she’s about to jump off the planet with joy. They go back to the apartment and bake cookies, flinging flour in the air like slow-motion ghosts; the boyfriend’s Christmas tree looks on, glowering.

What happens next is one of those turns that will always make the movies a sublime pastime for dreamers: Morvern Callar blooms from slate-gray skies into sangria sunsets and possibilities, limited only by the improvisations of a modern young woman on the run, which is to say, not at all. The girls run into bars wearing goofy scuba masks; they run circles around the randy boys hitting on them at the hotel; they run down to the beach hoisting bottles of champagne—they’re always running.

Still, Ramsay is careful to preserve Morvern’s detachment by picking out sad little details: a drugged-up raver pressing her smudged face against a bathroom wall; or Morvern moving through a crowded danceclub pounding with noise, the strobes isolating her in snapshots of aloofness. (During this section, the script rings its one false note: Morvern shares a wild night of sex with another griever, perhaps attractive to her because of his loss, and it’s a simplification far too obvious for Morton’s nuanced impassiveness.)

Eventually, Morvern and Lanna fling themselves into the surreal Spanish desert—a bickering pair of extremely pale women in the sun. They go separate ways, but just as it seems the vacation is about to unravel, Ramsay uncorks her wittiest development, making Morvern’s trip a permanent one. “Such a distinctive female voice,” crows the publisher flown out from London, hot for her signature. It’s a big laugh because he couldn’t be more fooled. Or could he? Morton’s impression burns so deeply that you wonder if Ramsay might have just proven him right. Is the world ready for authors like Morvern Callar? It better be. (Her hefty advance will go a long way toward writing lessons.)

But she’ll have to go it alone; like last year’s Y Tu Mamá También and most coming-of-age stories, Morvern Callar ends with the bittersweet trade-off of carefree companionship for lonelier sense of purpose. Ramsay, having at last redeemed her headtrip movie, still can’t resist one final dive inside, to the softly arpeggiating guitar and aching voice of Mama Cass: “While I’m far away from you, my baby …” We’re sucked back into Morvern’s head for the last time, but I wasn’t able to get this movie out of mine for days.