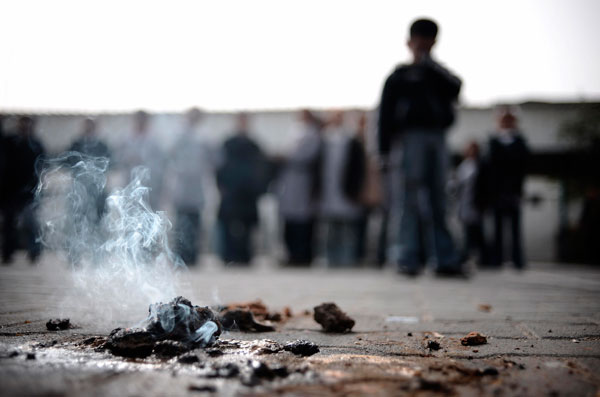 On January 24, a piece of white phosphorus burns at the UNRWA (UN Relief and Works Agency) primary school in Beit Lahia in the northern Gaza Strip. (Photo Olivier Laban-Mattei/AFP/Getty Images.)

One woman described what happened after her arm was hit by burning white phosphorus: ‘It burnt a hole and melted everything.’

“You feel like a child playing around with a magnifying glass, burning up ants.” That is how one Israeli soldier described Operation Cast Lead, the Israeli Defense Force’s (IDF) invasion of the Gaza Strip, which began in December 2008.

His is one of 54 testimonies collected by the Israeli organization Breaking the Silence in a 110-page report that paints a disturbing picture of urban warfare in one of the world’s most densely populated areas, where more than 1.5 million people occupy a narrow strip of land between Israel and the sea.

Another soldier, after recounting an incident in which his unit used civilians as human shields, described Gaza as a “moral twilight zone.”

It is an apt term for Gaza’s wholesale destruction: homes demolished by Caterpillar D9 bulldozers (manufactured in the United States and armored by Israeli Military Industries) and set afire by white phosphorus canisters (made by Pine Bluff Arsenal, a U.S. Army installation in Pine Bluff, Ark.). Save the Children, a U.K.-based NGO, estimated that more than 500,000 people were displaced during the war, and, a month after the ceasefire, 100,000 remained homeless. The Palestinian Economic Development Council puts a $1.9-billion price tag on rebuilding from the 22-day war. It noted that even under ideal circumstances the work could take five years.

The term also applies to the civilians killed: children cut down while playing, women and men killed as they tried to carry on their normal lives. Civilians were targeted by Cobra helicopters armed with high-explosive anti-tank (HEAT) missiles (both made by Lockheed Martin), blasted by Strike missiles shot from Hermes drones (designed and manufactured in Israel) and caught in the crossfire as groups of soldiers advanced on firing militants. Richard Falk, the UN Special Rapporteur for Human Rights in the Occupied Territories, says that of the 1,434 Palestinians killed in Gaza, 960 were civilians, including 121 women and 288 children.

Arms and dollars for the ‘moral twilight zone’

Israel–the largest recipient of U.S. military aid–has one of the most sophisticated and extensive military arsenals in the region. U.S.-origin weapons predominate and are an emblem of Washington’s close relationship with Tel Aviv. During George W. Bush’s presidency, Israel received more than $22 billion in military assistance from the United States. The bulk of this was in Foreign Military Financing (FMF), which are U.S. grants for weapons purchases. Now, FMF is on the rise. President Obama is following through on his predecessor’s promise to increase security assistance to $30 billion over the next 10 years.

In addition to these systems, human rights groups found evidence of Israel’s use of a wide array of controversial, experimental weapons systems.

“Why fire phosphorus?” “Because it’s fun. Cool.“–Israeli soldier, to Breaking the Silence.

White phosphorus is designed to obscure the battlefield, increasing freedom of movement for the user. It can also be used as a weapon. The U.S. Army Center for Health Promotion and Preventative Medicine notes that white phosphorous is “spontaneously flammable” and an “extremely toxic inorganic substance.” In Gaza, it was used to devastating effect used to burn down buildings. As one Israeli soldier told Breaking the Silence, “phosphorus was used as an igniter, simply to make it all go up in flames.”

One woman interviewed by HRW described what happened after she was hit by burning white phosphorus: “It burnt a hole and melted everything,” she said, pointing to her bandaged arm. The phosphorus ignites and burns on contact with oxygen, and continues burning until nothing is left or the oxygen supply is cut. According to medical personnel, the wounds sometimes began to burn again as they cleaned them.

In late January 2009, an Amnesty International investigation “found white phosphorus still smoldering in residential areas throughout Gaza days after the ceasefire came into effect on 18 January.” In the bombed courtyard of the Gaza headquarters of the UN Relief and Works Agency for Palestine Refugees, researchers found fragments of white phosphorus artillery shells and note that the “attack had caused a large fire, which destroyed tens of tons of humanitarian aid, including medicines, food and other non-food items.”

Unlike much of Israeli military hardware, the Hermes and Heron drones are manufactured domestically, and both were used in Operation Cast Lead. In a joint assessment of Israeli drone attacks, B’Tselem, the Palestine Centre for Human Rights and Al Meza Centre for Human Rights found that Israel carried out 42 drone attacks in which 87 civilians were killed during the war.

Marc Garlasco, a senior military analyst with HRW, describes how precise and discriminate the drones can be: “Drone operators can clearly see their targets on the ground and also divert their missiles after launch.” In a study of six specific IDF drone attacks during Operation Cast Lead, HRW found that 29 civilians were killed, including 8 children. According to their study, 5 of the 6 attacks were carried out in broad daylight, all of them in civilian areas far from the fighting and in “unlikely sites for launching rockets into Israel.” Given the drones’ high degree of precision, HRW asserts that “these attacks violated international humanitarian law.”

Human rights investigators, journalists and humanitarian workers were all barred from Gaza during the fighting, fueling confusion and speculation about what kinds of weapons systems were being used.

Mads Gilbert, a Norwegian doctor who worked in a Gaza hospital during the war, told “Democracy Now!” that “we have seen a substantial number of amputations where the amputees do not have shrapnel injuries. On the contrary, they have torn apart their legs, often one or two or even three limbs.” These injuries–new, terrible and seemingly shrapnel-free–have led to the hypothesis that Israel has been using what are known as Dense Inert Metal Explosives (DIME), a type of weapon that is still in testing phase in the United States.

“It is highly likely that Israel has developed its own version of DIME,” writes journalist David Hambling on the national security blog Danger Room. The “Iron Fist” interceptor, unveiled by the Israeli military in 2006, works in a way that is consistent with DIME technology. As Hambling writes in the online magazine Defense Update, the Iron Fist “uses only the blast effect to defeat the threat, crushing the soft components of a shaped charge or deflecting and destabilizing the missile or kinetic rod in their flight.”

Amnesty International researcher Donatella Rovera surveyed the damage wrought by these weapons and concluded, “The kinds of weapons used and the manner in which they were used indicates prima facie evidence of war crimes.”

Months after Operation Cast Lead, countless questions about the conduct of the IDF and the weapons used in Gaza remain unanswered. Gathering incontrovertible evidence and making solid conclusions is a critical part of post-conflict reconstruction. But given the kind of investigations that have been carried out thus far, that sort of closure seems out of reach for the people of Gaza.

The IDF carried out five of its own investigations, concluding that it “operated in accordance with international law” and that the small number of questionable incidents that did occur were “unavoidable and occur in all combat situations.”

HRW deems these investigations “not credible” and has called on the Israeli government to cooperate with a comprehensive UN investigation led by the former chief prosecutor of the international war crimes tribunals for the former Yugoslavia and Rwanda, Richard Goldstone. Thus far, Israel has opted not to participate.

And the United States–Israel’s closest ally and largest supporter–has refused to push Israel to cooperate. It seems the “moral twilight zone” extends beyond Gaza, all the way to Washington.