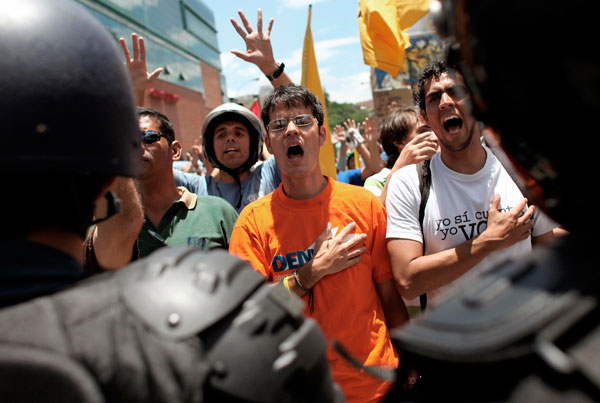 Anti-Chavez supporters demonstrate face-to-face against pro-Chavez supporters in front of the parliament in downtown Caracas on August 13, 2009, while the country's Congress discusses a new education law. (Photo by Thomas Coex/AFP/Getty Images)

Ten years after Chavez’s election, the movement he inspired remains divided over goals and strategies.

The co-existence of support for both grassroots and statist strategies within the Chavista movement over such a lengthy period of time suggests the necessity of a synthesis.

Hugo Chavez has become the face of Venezuela. But if we are to understand the ongoing debate over strategies for change in Latin America, we must step back from the avalanche of Chavez headlines and examine what is happening on the ground around Latin America’s most visible leader. Indeed, an analysis of concrete developments in Venezuela sheds light on the viability of movements and struggles in developing countries that aim to transform their respective societies and challenge domination from the north.

Throughout the developing world, these types of political contestation have been initiated from “above” and from “below”: by the state and political parties that seek to obtain and retain power, and by social movements and unorganized sectors of the population.

One strategy, traditionally called “anti-imperialist,” leads to the assertion of sovereignty by third-world governments and the formation of a bloc of nations around common demands and goals. With this in mind, the traditional Latin American left promoted “revolutions of national liberation,” whereby a government linked to an institutionalized political party, a powerful labor movement, and sometimes a progressive national business sector, played an interventionist role in the economy and challenged foreign economic interests. Before globalization began in the 1980s, nearly all those who supported far-reaching political change defended a statist (or “top-down”) strategy along these lines.

A second, grassroots approach centers on horizontal relationships that arise outside of established power structures, often in the form of social movements that are internally democratic and more loosely structured than political parties.

The champions of this paradigm have been identified with various related schools of thinking. One of them is the “post-modernist” school, which glorifies popular movements and views broad sectors of the population whose daily lives clash with the logic of the established system as potentially more revolutionary than political parties. These writers rule out forceful government assertion of independence as unfeasible due to global constraints and the danger of international isolation. They also consider statist strategies hierarchical and thus limited in their ability to create meaningful, far-reaching change.

To party or not to party

The difference between the two approaches within the Chavista movement is most easily revealed by the attitudes of its members toward political parties. Those who belong to and closely identify with the main parties of the governing coalition – which includes Chávez’s party, the United Socialist Party of Venezuela (PSUV), as well as the Homeland for All party – tend to defend the statist approach. Chavistas who are independent and critical of the political parties adhere to the grassroots strategy, which spurns vertical political structures. For these “independents,” participation in Chavista social movements or government programs serves as a substitute for party membership and promotes a sense of identification with Chavismo.

The independents stand for a “grassroots” or “horizontal” approach, which favors maximizing the input of rank-and-file Chavistas in decision-making, including the naming of candidates to run for office. They are critical of party leaders for tolerating corruption and promoting bureaucratic behavior that dampens enthusiasm for the movement.

At the Constituent Assembly in 1999, which drafted the nation’s current constitution (subsequently ratified in a national referendum), the grassroots line of thinking underpinned the thesis that direct democracy would eventually displace (rather than complement) representative democracy. Those who identify with the grassroots approach were encouraged when, in April 2001, Chávez harshly criticized party bureaucrats for failing to represent and harness the zeal of the movement’s popular base, and, as a corrective, called for the activation of social and political movements such as the community-based groups known as “Bolivarian Circles.” Beginning in early 2004, Chávez again invoked the “grassroots” vision by calling for a “revolution in the revolution” to shake up bureaucratic structures and unleash an all-out war on corruption.

Party leaders in general favor a “vertical” or statist approach that views the Chavista party as essential to the revolutionary process and calls for the maintenance of the movement’s unity at all costs. The verticalists are wary of the undisciplined and occasionally disruptive behavior of the Chavista rank-and-file. And just like those who champion the grassroots approach, those who support the vertical approach can draw on important aspects of the Chavista experience as well as remarks by Chávez himself.

Can Caracas water the grassroots?

Even though Chávez occasionally criticizes Chavista politicians and the state bureaucracy for being out of touch with the people, he recognizes the Chavista political parties’ outstanding legislative role, beginning with the activity of party representatives in the Constituent Assembly ten years ago.

The ongoing friction between a large number of “independents” who actively support Chávez, on the one hand, and the main governing parties, on the other, is a unique feature of the Chavista process. The failure of both groups and their respective strategies to gain the upper hand during these ten conflict-ridden years of Chavista rule undermines the argument that one of the two approaches is unviable as a strategy for revolutionary change in the modern political setting and should be discarded.

The Chavista model that began to emerge in 2004 stimulated local, community and worker participation in accordance with the grassroots approach. The creation of tens of thousands of cooperatives, the encouragement of worker input in decision making in both private and public companies, and the formation of “Community Councils” (beginning in 2006) to oversee, and in some cases undertake, activity ranging from public works to health programs at the neighborhood level embodied the essence of the new model. Recent efforts to build on the emerging model include a government plan to create links between community councils as well as to stimulate their participation in schools located in their neighborhoods.

These developments, however, have faced major practical obstacles and fall short of the expectations of the grassroots purists who celebrate the absolute autonomy of social movements and distrust the intentions of the central government. But contrary to what the purists advocate, the Venezuelan state has played a central role in giving form to the grassroots approach.

The state has created structures conducive to popular participation, promoted “socialist” values and financed activity that channels the energy of the large number of Chavistas who have a tenuous or non-existent relationship with the main parties of the governing coalition. In the process, the state has been instrumental in enhancing the sense of empowerment of the Chavista movement’s rank-and-file.

Pro-Chavista social organizations and rank-and-file political groups, such as the Bolivarian Circles which proliferated throughout the country at the time of the coup in 2002, have been short-lived. Nevertheless, the continuous creation of new ones demonstrates the tenacity of “grassroots” thinking and behavior. (Chávez has often called for the formation of social organizations, such as the Community Councils, after which they have sprung up throughout the country outside of the confines of Chavista party structures.)