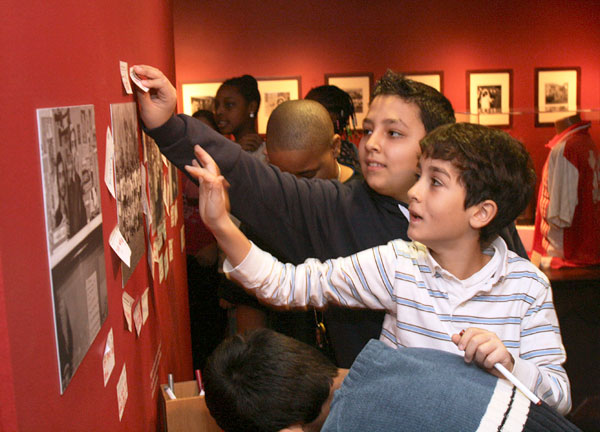 A nationwide initiative pulls museums into one of today’s most highly charged issues: immigration.

Some people think of museums as refuges of the past, full of brittle documents and mothballed artifacts. However, the new Immigration Sites of Conscience project draws on the historical authority of museums while pulling them into one of the most highly charged issues of the present: immigration.

As part of the initiative, which launched this fall and continues indefinitely, museums across the country are hosting exhibits and events while reaching out to local communities to address the many faces and facets of immigration. The project is a spin-off of the International Coalition of Sites of Conscience, a global network of historic sites–like the National Civil Rights Museum in Memphis and the Gulag Museum in Russia–that seek to commemorate the past and provoke dialogue about the present.

The Levine Museum of the New South in Charlotte, N.C., deals with the city’s rapid shift from “black and white” to “technicolor,” as the exhibit there describes it. Long a primarily African-American and white city, Charlotte is now home to large Latino, African, Eastern-European and Asian immigrant populations who moved there in recent decades.

“Immigration is a challenging issue, it makes us think about what kind of South we want to shape going forward,” said Emily Zimmern, director of the museum. “Will it be welcoming, or hostile?”

The museum has two dialogue programs: one for business leaders, journalists, law enforcement officers and others; another for teens. The idea is to offer people a space to open up about their own lives and feelings.

“We’ve found people often will say, ‘I’ve worked with you for 10 years and I had no idea that was your story,’” Zimmern said.

The county government has enrolled hundreds of people in the adult program, called Speaking of Change, as part of its diversity training. The teen program, Turning the Tables, forces participants to walk through a jungle of plastic strips emblazoned with hurtful stereotypical words–literally pushing through stereotypes.

At the Wing Luke Asian Museum in Seattle, visitors learn about an often overlooked segment of the American immigrant community – Cambodians – and the deportation of legal residents because of criminal convictions. Since 1975, more than 187,000 Cambodian refugees have settled in Seattle, making it the nation’s third largest Cambodian community after Long Beach and Lowell, Mass. Many were born in refugee camps and emigrated as young children, obtaining legal U.S. resident status without ever knowing Cambodia.

Many young Cambodian men are in gangs, often a result of their search for belonging or struggling, fractured families, local leaders say. Many end up with criminal convictions for gang-related crimes. Under existing immigration law, legal residents are ordered deported for criminal offenses, including many misdemeanors.

The exhibit, curated by a Cambodian American community activist facing deportation, puts Asian immigration in a historical context. “People might think we’ve always been the welcoming nation, but if you go back and look at laws they reflect something really different,” said Cassie Chin, Wing Luke’s acting director.

The Arab American National Museum in Dearborn, Mich., features the experiences of four immigrant groups from three cities: Arabs, Latinos, Eastern Europeans and South Asians from Detroit, Dearborn and Hamtramck. Exhibits ask questions like, “Why are they here?” and “What keeps them here?” and dispel myths about immigrants, including the common refrain that they “steal jobs.”

“These stereotypes are so far-fetched,” said Museum Director Dr. Anan Ameri. “The immigrant community provides its own institutions…They’re not taking jobs. If anything, they are creating jobs.” She noted that in the Detroit metropolitan area, a national poster child for economic ruin, immigrant enclaves are doing relatively well because of how immigrants support each other and develop micro-economies.

Liz Sevcenko, founding director of the International Coalition, sees the program as a direct response to the polarized immigration reform debate. Although there are plenty of marches and protests related to immigrants and their communities, she thinks museums have a unique role to play.

“[T]hese places of memory have incredible power and potential, and therefore an obligation to…address what’s happening currently,” Sevcenko said. “Whether walking into the Great Hall at Ellis Island or stepping into a cell at Angel Island (in California) where immigrants were detained…you’re feeling the individual human impact of these big policies.”