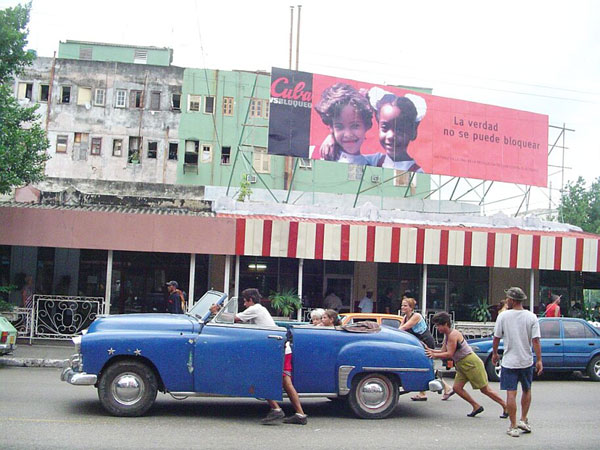 “The truth cannot be blockaded." (Photo by Yosvany Deya, HavanaTimes.org)

INSIDE CUBA: Voices From the Island

Americans—especially on the left—love to ask Cubans living abroad if we're for or against Cuba. I always say the same thing: It's complicated.

When my family escaped from Cuba in 1963 – on a boat in the middle of the night – we thought the Cuban Revolution wouldn’t last. Soon, we believed, we’d be back home, in Cuba, brief sojourns in the U.S. having been practically a ritual for dissenting Cubans after any change in government.

Like so many others, my parents were counting on the revolutionary government to be like the dozen or so administrations since Cuba had freed itself from Spain at the end of the 19th century: with the exception of Gerardo Machado’s dictatorship, they were mostly ephemeral, propped up or dismissed at the whim of the United States. My family wasn’t rich – we owned nothing – but we wanted to go back to our country, to live in our homeland.

So many years later, the Cuban Revolution has proven itself remarkably durable. This year marks the 50th anniversary of the triumph of the Revolution.

As a child of exiles, I grew up with very particular mantras about Cuba and the Revolution. Because these came from my parents, I believed them whole-heartedly. I still remember going to Mexico as a 15 year-old exchange student and seeing someone wearing a Che Guevara t-shirt (it was not, in fact, the ubiquitous Korda image of today). I stood still, waiting for a reaction from the crowds … anything … because it seemed impossible that such a momentous thing could happen and that no one would scream or do something. Was it possible that the Cuban Revolution, the source of so much anguish for my family, could be such a banal thing to others that a Che T-shirt could pass by so inadvertently?

In college, I went to hear Irakere, the great Cuban jazz band, on their first U.S. tour with Stephen Stills. I wrote a gleeful review for my campus paper. What I didn’t write about was going backstage, marveling at the warmth and camaraderie we shared, at the sheer normalcy of it.

Later, in college, and especially as I met young Cubans who traveled to Cuba in defiance of familial objection and U.S. policy, I began to hear other stories about the island, and about the revolution. And I began to question many things. I met Cubans who lived in Cuba and were in the U.S. on scholar or artist visas.

I read my poetry in tandem with poet Eliseo Diego and argued about how gays were treated in Cuba with singer Sara Gonzales. There was much praising of the Revolution, or sober and measured commentary, so much in contrast to exile extreme. But sometimes, especially if there was too much drinking, there would be dark confessions, especially from closeted gays, about things that weren’t right.

I also briefly became friends with Reinaldo Arenas, an intense man with razor-sharp intellect whose contempt for the revolution was legendary (he left a note blaming his suicide on Fidel Castro!) but who also said upfront that he might never have become a writer without the revolution’s educational policy.

In 1995, I went to Cuba for the first time, attending a conference on national identity. It was a strange and enchanting trip, though the transcripts of the conference will reveal I said not one word. Instead, I watched, I listened. I did all the things returning Cubans do – I visited the tiny apartment in which I was conceived, I walked up the steps of the University of Havana, I strolled the Malec – n and cried a lot. I was much fawned over, the prodigal daughter returned – because in Cuba, I never left: my parents “took” me.

I also made lifelong friends on that visit, including Norberto Codina, the editor of La Gaceta de Cuba, and a contributor to this special issue. And when, two years later, I fell in love with a Cuban artist who would go on to do some of the most challenging work seen on the island since the revolution, I began a seven year process of going back, often for months at a time – of, in fact, living in Cuba, having a home and neighbors and daily rituals, of having my ideas challenged and sharpened, of constantly discovering new and unexpected aspects of Cuba and its revolution.

I never believed my experience in Cuba was like those who had never left: Though no one could tell the difference when I was out and about – I don’t look any different, I don’t dress any different, and I speak Spanish fluently, with the usual feverish Cuban tempo, and chock full of Havana argot – I knew I could leave, I had access others didn’t (in a typical twist, it was me – the writer living abroad – who introduced my artist girlfriend to Abel Prieto, who would later become the Minister of Culture), I had dollars, I could go into the tourist store my family couldn’t enter and resolve all sorts of things. I could say and do things for which there would be little patience if I were actually living there, never left.

Americans – especially on the left – love to ask Cubans living abroad, especially Cuban-Americans, if we’re for or against Cuba, if we’re pro or anti-Fidel, if we’re revolutionary or anti-revolutionary. It’s a hateful and ignorant question because it assumes our situation is black and white, binary, oppositional. I always say the same thing when I’m asked: It’s complicated.

Part of the problem is that, well, it’s our problem – that is, it’s a Cuban problem. I know few Cubans, and not just in Miami but in Havana too, who want intervention. The vast majority of us – here and there and everywhere – want reconciliation, an end to estrangement, greater civil liberties on the island, a more efficient and open economy, peace and friendship with the U.S. But we want to figure this out amongst ourselves, among Cubans.

I know this is hard sometimes for my non-Cuban friends on the left, who are so invested in Cuba they feel it’s practically theirs (and so invested sometimes, that they’re loath to see the evidence with their own eyes of anything that might contradict their ideas). But it’s not. Cuba’s ours. I know it’s hard to imagine that the crazies in Miami should actually have a say in Cuba’s future. But they should, yes. When I’m in Cuba, I tell them that. And in Miami, I don’t shy away from saying that those who stayed in Cuba are the ones who need to make the decisions, the ones who need to figure out what’s best, and that those of us who have chosen to live abroad – for whatever reason – can only have an auxiliary role. Cuba is for Cubans.

The most crucial lesson I’ve learned going back and forth – I still do it, at least once or twice a year – is that we have to listen to each other, really listen. For me that has meant acknowledging that my parents were, in fact, right about many things. It has also meant an understanding that what Cubans in Cuba think is paramount. So when In These Times approached me to put together a special issue marking the revolution’s 50th anniversary, the very first thing I asked was that it be an issue by Cubans on the island.

I wanted this to be different than the usual packaging, full of economic or historical treatises. Because I’m a writer engaged with culture, and particularly with Cuban culture – this will be the tenth year I single-handedly support La Gaceta’s annual short story contest, for example – I have a disposition for seeing things through a cultural prism. But I also think culture, frankly, is a better indicator of the future than almost anything else. Anyone familiar with the Cuban culture of sacrifice and inventiveness would have known that, the rational logic of economics aside, the collapse of the Soviet Union in 1989 would bring deep changes but that Cuba, and its revolution, would survive.

So in this special In These Times edition, “Inside Cuba: Voices from the Island,” you’ll find literary writers, rather than academic experts. No one is a dissident, though they are all critical in some way.

Kaloian is an official photographer for Juventud Rebelde, the newspaper of the Union of Communist Youth. Leonardo Padura is Cuba’s best known, and probably most lauded, contemporary writer. Yohamna Depestre should be too. After years of working in the system, Orlando Luis Pardo Lazo has begun to work outside it: he now blogs and self-publishes, both activities technically not legal in Cuba. Yoss is, well, many things, among them a great lover of rock – Cuban rock. You didn’t know there was Cuban rock? Now you do.

There are two articles that were not exactly submitted for the section. One is a compilation of entry selections from a blog that details gay life in Cuba. Technically the blog is unsigned, though it is an official forum of the Reinaldo Arenas LGBT Memorial Foundation, a queer grassroots group in Cuba not recognized by the government. When I met the president of the group, Aliomar Janjaque, and the vice president, Mario José Delgado Gonzáles, last summer, they made a point of underscoring that they’re not dissidents.

Delgado was going to write something for us, but he was arrested, then released and kicked out of school, for engaging in activities that, at least from here, might seem rather surreal. Some of you may be surprised by the constant use of the word “homosexual” in the blog entries, so uncomfortably clinical for us in the United States. But I kept it because that’s how it appears in the original Spanish, just as “gay,” in English, also appears.

The other article is a column that appeared for only a few hours on the Juventud Rebelde website. It’s poignant and heartbreaking but, perhaps more importantly, it’s very telling.

There are many other things, of course, that we wish we could have included. Things that should be here, things that will, hopefully, be here in future issues of In These Times. This isn’t definitive. It’s just a glance. A peek inside.

Editor’s note: This article appeared, in much shorter form, as the introduction to the special “Inside Cuba” section of In These Times’ December 2009 issue.