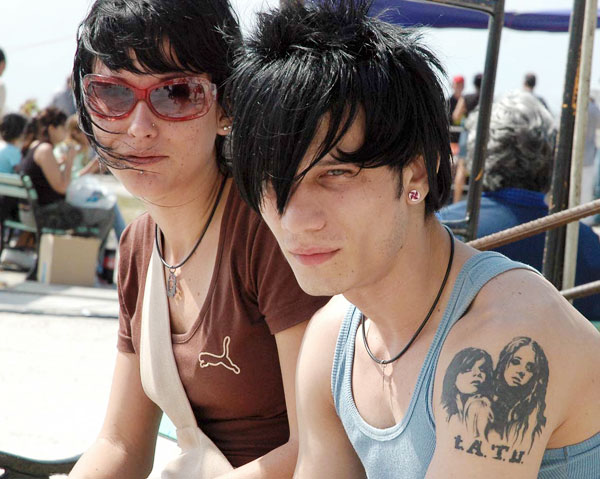 A history of rock in Cuba.

After half a century of Revolution, the idea of Cuba and rock still strikes a discordant note for some.

On September 20, more than 1 million people in the Plaza de la Revolucion watched Colombian rocker Juanes and his friends–cheering, dancing, swooning from the Havana heat.

Those that watched the concert know there was merengue, salsa Nueva Trova (the revolutionary folk pioneered by Silvio Rodriguez and Pablo Milanés), funk, hip hop and pop. But for us Cubans, only Carlos Varela rocked (the 46-year-old gnome with the black wool hat, the only one on stage who defied the order to wear all white and stuck to his trademark black t-shirt, a slogan across it that stated: “I’m wearing a WHITE shirt”). He was also the only Cuban on stage who made anybody nervous, singing his song, “25 mil mentiras dobre la verdad” (25 Thousand Lies About the Truth; a video of Varela singing the song is below).

After half a century of Revolution, the idea of Cuba and rock still strikes a discordant note for some. Rock was made official in 2007 with the creation of the Agencia Cubana de Rock. And it is accepted by the authorities in the Ministry of Culture, for whom it is the music of their youth. But rock still occupies a complex space. Its bad-ass attitude perfectly fits young people’s compulsion to rebel. But in Cuba, rebelling frequently invites suspicion.

In the early years of the Revolution, rock had no official support. In fact, a lot of young Cubans’ rock instruments were homemade; drum heads were patched with X-ray film and mics were lifted from old telephones.

Governmental hostility between Cuba and the United States gave certain cultural functionaries the excuse to reject rock as a way to show their “patriotism,” to “safeguard national culture” from “foreign, noisy and scandalous beats” and to protect our “helpless youth”–the same young people who were dancing to rock in the countryside and in factories while building socialism–from the “ideological diversionism” represented by this “dangerous music of the enemy.”

So as not to seem too dogmatic, these functionaries added that they had nothing against rock per se, so long as it was in Spanish. So while the rest of the world was experiencing the British Invasion, official Cuban radio was awash with groups such as Juan y Junior, a Latin version of Simon & Garfunkel.

There was censorship in the streets too. Police and young party militants routinely raided Coppelia, the ice cream park in the Vedado neighborhood of Havana, to catch Cuban hippies and forcibly cut their hair, accusing them of being “homosexuals and anti-patriotic dissidents.” They also stopped hippies on the streets and inspected their vinyl records. If the album cover for Pello El Afrokán contained vinyl by the Rolling Stones, they would break the costly disk.

While the official media satirized rock fans and those who dared to defend their right to choose what to listen to, Cuban youth listened to foreign FM stations and records brought by relatives and friends who were diplomats (creating an early instance of revolutionary privilege), aviators or merchant marines, any occupation that allowed travel to capitalist countries. Cuban youth danced to cover bands that played as close in style to these originals as possible (a performance style called “fusilar”). This imitation retarded the emergence of a Cuban rock with its own identity for another decade.

Influences like Nueva Trova, the occasional visit by foreign rock groups (including the socialist camp), and the constant imitation of Anglo-Saxon rock set the terms for the Cuban rock explosion that came in the ’80s. Festivals such as “Caliente” at the Casa de Cultura in the upscale Havana neighborhood of Playa (which continues to host rock shows), concerts in the Soviet-style suburb of Alamar and events such as “Ciudad Metal” (Metal City) in the towns of Santa Clara and Cruces helped the more radical elements among the hard rockers to find a home in heavy metal. Fans of this style were referred to as “frikis” (there’s a debate about whether the word is derived from “free kiss” or “freaks”), which were distinguished by their dress and attitude: “We’re bad cuz nobody loves us; nobody loves us cuz we’re bad.”

Like the hippies before them, frikis gathered at Coppelia, and were constantly harassed by the police, who considered them anti-social, druggies and a source of delinquency.

Responding to this fan base, new rock groups refused to limit themselves to covers and began to write original work in Spanish. Yet, rock continued to face official criticism for distracting Cuban youth from the task of constructing socialism. Little by little, official resistance began to weaken and it became more acceptable to talk about a Cuban rock that didn’t threaten the Revolution, directly or indirectly. In 1987, Mar’a Gattorno, events director at the Casa de Cultura in the Playa neighborhood of Havana, created what came to be popularly referred to as “El Patio de Mar’a.” In spite of its meager stage and audio facilities, during its 16 years of existence, every Cuban rock group worth its salt played in that tiny courtyard.

Not everything was happy. In 1991, during a concert by Metal Oscuro at the Casa de Cultura in Playa, the police charged the audience with dogs, clubs and tear gas, provoking a near riot that the Cuban media completely ignored. Most concerts, of course, didn’t end badly, and many were wonderful.

In the ’90s, following the collapse of the Soviet empire, Cuban rock experienced the devastating effects of The Special Period. Without state support, the regional festivals disappeared and rock fans in the provinces were left adrift.

One of the most important bands right now is Tendencia, which has official approval. Following the example of Sintesis in the ’80s, Tendencia, from the province of Pinar del Rio, infuses its hard rock repertoire with Afro-Cuban rhythms, using the Yoruban batá drum as its foundation. “Yoruba Soy” and their versions of “Guantanamera” and “Hasta Siempre, Comandante” have been hits in Spain, where they’ve toured several times.

Kiko Mederos, Tendencia’s leader, is also the provincial president of the Asociacion Hermanos Sa’z (an offshoot of the Union of Communist Youth), which is the island’s biggest rock promoter. Perhaps most significantly, rock was made official in 2007 with the creation of the Agencia Cubana de Rock (an outgrowth of Hermanos Sa’z), which is headquartered at Maxim Rock, an old theater renovated specifically for rock performances with state-of-the-art technology.

Many still lament the passing of the unofficial El Patio de Maria, since, in addition to the shows, El Patio provided a place for young rock fans to congregate. Since there are almost no affordable places left, young people hang out on the streets, unaware that they are imitating the hippies and frikis from years before.

G Street (near 23rd St.) in Havana is now the informal space for rockers but it’s a mixed bag: there are rivalries between rock and emo groups, heavy metal and Trova fans, and those who still enjoy Cuban traditional music and the ever present reggaeton.

The complex conflicts between the metaleros, emos, repas and mikis are evidence of Cuban youth’s lack of opportunity. Repas are salsa and reggaeton fans who mostly live in the poor outer neighborhoods and don’t have much economic power. Mikis are obsessed with designer labels and the newest electronic toys, such as iPods, cell phones and MP3 players. They listen to techno and enjoy certain economic privilege.

The official attitude towards rock has, of course, changed over the years, from extreme ideological rejection in the first decades of the Revolution, to a certain acceptance. But, to be frank, it’s frequently a superficial and opportunistic acceptance. The Cuban state, like the establishment everywhere, would like to take advantage of rock’s mobilizing capacity to entertain/control youth who, more and more, see their own and their country’s future as less clearly intertwined, regardless of official speeches and campaigns about pride and resistance.