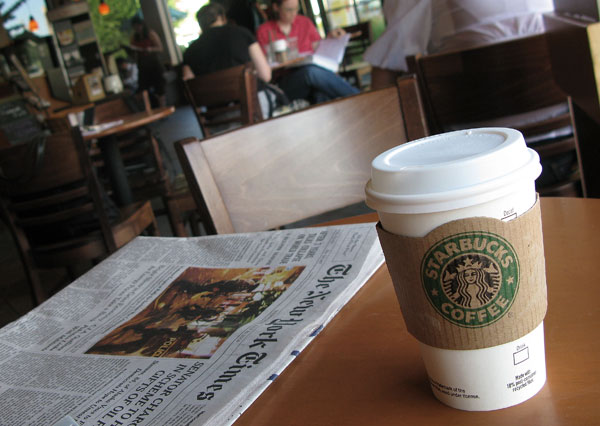 The rise of Starbucks reveals how we really live, and it ain’t pretty.

When Bryant Simon’s book, Everything but the Coffee: Learning about America from Starbucks (University of California Press, 2009) arrived in my mail, I thought, great, just what we need: another book by an academic that attempts to understand the world through a simplistic lens, like salt, sushi or coffee. That this genre sells well probably motivated Simon’s publisher. But Simon’s book is better and more honest than most of the genre in recognizing the limitations of both author and subject. He peeks into the inner life of American culture, but thankfully refrains from offering a unified theory that explains all.

Simon shows us how we really live, and it ain’t pretty. There was a time, not so long ago, Simon reminds us, that many of us wondered why people would pay so much money for a cup of coffee–even as we were edging closer in line to place our own order. Starbucks, writes Simon, “had little to do with coffee, and everything to do with style, status, identity and aspiration. … Starbucks delivered more than a stiff shot of caffeine. It pinpointed, packaged, and made easily available, if only through smoke and mirrors, the things that the broad American middle class wanted and thought it needed to make its public and private lives better.” Starbucks fed our emotional needs for status. It became our little “self-gift,” an emotional pick-me-up. It allowed us to feel successful.

It also provided a safe, clean “third space” between home and work, those big chairs and couches becoming our new public sphere. It brought us exotic places and sounds, exposed us to an underground in the safety of a cushy seat: teaching us about places where our coffee came from, and new music and literary voices. It tried to be our cultural guide and helped us feel good about our environmental footprint through its green campaigns and aid to farmers, even if Starbucks did little and we did nothing but buy coffee. It did so consciously, purposefully manipulating our desires, hopes and aspirations, all the while making us feel good about ordering up a venti soy latte.

But, we also knew, on some level, that it was all a delusion we actively participated in. “Starbucks worked as a simulacrum,” Simon writes, “it stamped out the real essence of the original idea of the coffee house and, through proliferation and endless insistence, became itself the real thing for many bobo and creative types.” Even as we believed we were being individuals, demonstrating our sense of style, we were just following the javaman’s master plan. In seeing Starbucks as a third space, as a solution to the environment and globalization, we played into the illusion and lost ground on these fronts.

Simon joins a recent spate of books on the middle class whose authors seem unable to separate themselves from their subject and therefore are compelled to include themselves in the narrative. For instance, in Elsewhere, U.S.A., sociologist Dalton Conley explores the disruption of space in the modern American middle-class family, combining his research with autobiographical slices of his own family life. From Everything But the Coffee, we learn Simon’s coffee habits, haunts and unease with such.

Like much of this literature, there is a confessional quality. We know we should not feel good about our participation in this system, but it is just so much fun. It is as if we who study the topic are involved in a process of self-criticism. This trend makes these books readable, perhaps, but it often dilutes their analytical force. Yet we still know too little about the middle class; with a defined working-class studies and history literature, we know far more about those lower on America’s economic ladder. Is the middle class too big and mystical to fully know? Or is it that most of the authors who write about the middle class are middle-class themselves, and thus uncomfortable with the self-reflection so necessary for thorough criticism?

What Simon and others demonstrate is that we are a culture of hypocrites. We want our coffee and we want to feel good about it: we live in the moment. We know deep inside that buying Starbuck’s Pike Place does not make us a better person, but part of us feels better hearing that it is sustainable. To more completely understand the middle class would require that we pierce the veil of this hypocrisy.