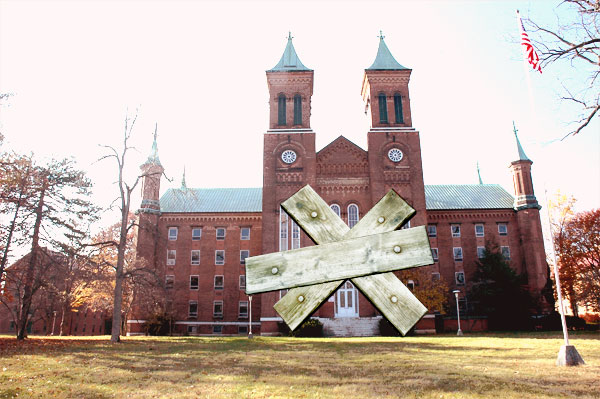 Out of business: Antioch College, in Yelllow Springs, Ohio, closed its doors in 2008.

By making a well-rounded education available only to the elite, we move one step closer to a society of two classes: one taught to think and rule and another groomed to follow and obey.

At the end of the 2007-2008 academic year, shrinking enrollment and a budget crisis forced Antioch College to close its doors after 156 years of progressive liberal arts education. Other liberal arts colleges and programs are under similar stress. University of California-Santa Cruz is not accepting applications to its History of Consciousness for the 2010-2011 academic year. Goddard College underwent dramatic restructuring in 2002, and the New College of California ended operations in 2008. These losses are emblematic of the hardships facing liberal arts and humanities programs.

In light of rising costs, students fear liberal arts degrees are not worth the price tag. Consequently, interest in the liberal arts and humanities is on the wane, and the education they provide runs the risk of becoming restricted to elites who are rich in capital–cultural and otherwise. The liberal arts are not the only source of a valuable education, but they place an unparalleled emphasis on critical thinking, integrated learning and civic engagement. The growing inaccessibility threatens to deepen the divide between a well-educated elite (once called the ruling class) and a technically proficient, but less broadly educated, middle and working class.

In the face of financial insecurity, students, colleges and universities have begun to calculate the value of higher education in terms of the “bottom line.” As tuition skyrockets and education becomes more unaffordable, students want assurances that their degrees will benefit them financially. A 2004 UCLA survey of incoming freshmen at 700 colleges and universities reported that the top reasons chosen for going to college included “to get training for a specific career” (74.6 percent), “to be able to get a better job” (71.8 percent), and/or “to be able to make more money” (70.1 percent). Meanwhile, over the last 25 years tuition has risen by 440 percent–more than four times the rate of inflation.

A college degree is no longer a dependable ticket to a middle-class lifestyle. Though a 2006 study commissioned by the Association of American Colleges & Universities showed that business leaders seek employees with a wide base of skills and knowledge, recent graduates are not finding a higher education advantageous amid the economic downturn. The job market for college graduates dropped 40 percent in 2009, according to a Michigan State University study of 2,500 companies nationwide. For many graduates lucky enough to find employment, the recession has meant taking low-paying retail or customer service jobs while struggling to pay off student loans.

Meanwhile, colleges and universities are explicitly gearing their curricula toward the job market, including tailoring academic programs toward the needs of local corporations. Macalester College President Brian Rosenberg predicts that “20 years from now there will be fewer colleges that fall under the category of small residential liberal arts colleges.” Data on emerging trends seems to agree. In an article in Inside Higher Ed, “The Case of the Disappearing Liberal Arts College,” Roger G. Baldwin and Vicki L. Baker write that “national data on liberal arts colleges suggest that their numbers are decreasing as many evolve into ‘professional colleges’ or other types of higher education institutions.”

Some, like Massachusetts Higher Education Commissioner Richard M. Freeland, hail this development. Freeland is part of a movement to connect liberal arts and professional programs through the inclusion of internships, practical skill development, study abroad programs and experiential education. He argues that advocacy for a stronger emphasis on practical skills can complement the traditional goals of liberal learning.

Yet, it is unclear if liberal arts colleges will be able to undergo this transformation and retain their core missions. “Whether you can sustain the intensity of focus on the liberal arts portion while still doing all those other things is an open question,” says Rosenberg.

As colleges and universities strive to become more profitable, faculty are coping with their own economic squeeze. Over the past three decades, colleges and universities have replaced tenure-track faculty positions with contract positions, often part-time. In his 2008 book The Last Professors: The Corporate University and the Fate of the Humanities (Fordham University Press), Ohio State University English professor Frank Donoghue writes that tenure-track and tenured professors now make up only 35 percent of college faculty, and that number is steadily falling. He notes that the decline in tenured positions has disproportionately affected faculty in liberal arts and humanities programs, which lack the government and private funding enjoyed by other departments. In turn, aspiring professors are becoming discouraged by the prospect of juggling multiple academic adjunct positions for little pay and no job security.

The current recession has greatly amplified existing pressures on liberal arts and humanities programs. Thomas H. Benton writes in his Chronicle of Higher Education article “Graduate School in the Humanities: Just Don’t Go,” that universities have “historically taken advantage of recessions to bring austerity to teaching” through hiring freezes, early retirements, and the replacement of tenured faculty with adjuncts. He writes, “When the recession ends, the hiring freezes will become permanent, since departments will have demonstrated that they can function with fewer tenured faculty members.”

Students, too, are likely to face the long-lasting consequences of shrinking endowments at private colleges and budget cuts at public institutions.

This past year, the director of financial aid at Reed College tasked the admissions team to not send acceptance letters to 100 scholarship students and instead find 100 students rich enough to pay $49,950 per year for tuition, room and board.

If liberal arts colleges such as Reed are unable to recover from financial hardship, they risk losing their economic, social and ethnic diversity.

In turn, students lacking a privileged background may be denied access to a liberal arts education, regardless of their achievements or aspirations.

“Figuring out a way with smaller endowments to provide the financial aid necessary to enroll an economically diverse student body–and to pay for all the other things that you have to pay for at a college–is a very big challenge,” says Rosenberg of Macalester College.

“One of the risks that we have to attend to is not becoming the educational equivalent of a BMW.”

If a liberal arts education becomes a luxury, the implications for civil society are profound. A broad-based higher education provides an environment that fosters the critical thinking skills that are the hallmark of informed, responsible citizenship. Disparity in education equals disparity in power. By making a well-rounded education available only to the elite, we move one step closer to a society of two classes: one taught to think and rule and another groomed to follow and obey.

Valerie Saturen is a freelance writer based in Tacoma, Wash. She writes about a variety of social and political subjects, including education, the environment and the Middle East.