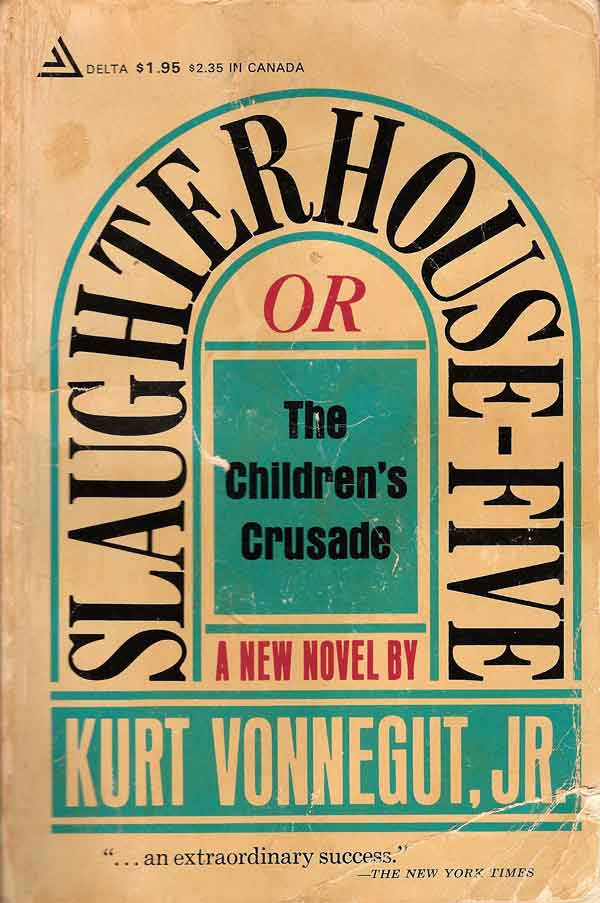 Beneath the book's structural gimmicks and childlike prose lies a kind of humanism, and even patriotism, more enduring than some of its early readers might have suspected.

Between 1995 to 2005, Kurt Vonnegut contributed to In These Times. All articles he wrote for the magazine this decade are collected here.

Slaughterhouse-Five first appeared in bookstores forty years ago, and it remains the signature achievement of Kurt Vonnegut’s long and distinguished writing career. Long in gestation, it oscillates between realism and science fiction, mordant humor and grief, relieved by moments of unexpectedly lyrical imagery to convey the author’s experience as a young soldier in the Second World War.

He recounts for us his trials after capture by the Germans during their last great counter-offensive, in the chaos of the Battle of the Bulge just before Christmas 1944. Through the tragicomic alter-ego “Billy Pilgrim,” we learn about Vonnegut’s six months as an object deprived of free will.

We are with him standing in boxcars bound, in mysterious stop-and-start fashion, for unknown destinations. We encounter the baseness to which people can descend, as well as the nobility to which they sometimes rise, in the most extreme situations. Then we find out what it is like to go through the apocalypse–the firebombing of the city of Dresden on the night of February 13, 1945, which Vonnegut and about one hundred other Americans interned there miraculously survived.

Then followed days and weeks when the prisoners were deployed in the process of corpse disposal–imagine that task, that surreal landscape. When he got home, Vonnegut was shocked to find almost nothing about the raid and its ground-level consequences in newspaper archives, and came to the conclusion that his government, abetted by the press, could lie. The impulse to somehow tell his “untellable” war story, to expose it to the light, would drive him for decades, and it became the focus for his most ambitious work of art.

Slaughterhouse-Five was an immediate critical and commercial sensation in 1969, and it has stood the test of time. It was named by the editorial board of the Modern Library #18 on the index of the most important English language novels of the twentieth century, and is now securely in the canon of assigned readings in high schools and colleges across the land.

Like all of Vonnegut’s published works, it has remained continually in print, and available globally in multiple translations. It reached the big screen in 1972, in a film adaptation the author liked. Alternatively, it has been condemned and even burned by those claiming offense at its use of rough soldier’s language, no doubt a disingenuous excuse to quash a message some consider dangerously “unpatriotic.”

But given the book’s almost corny faith in bygone civic virtue and the democratic traditions that lie at the heart of Vonnegut’s vision, his identification with the insurrectionist 1960s generation is curious in some ways. Baby boomers formed the core of his underground “cult” audience before Slaughterhouse was published, and an accident of timing accounts for its deep footprint in the midst of the Vietnam trauma.

Young people loved Vonnegut’s bag of tricks–the demystification of the creative process, the fractured narrative, the time-travel and flights to extragalactic planets like “Tralfamadore.” They adopted to the point of cliché the fatalism of the novel’s repeated phrase, “…and so it goes.” Along with fellow veteran Joseph Heller’s 1961 landmark Catch-22, Slaughterhouse bookends the decade with an absurdist deglorification of the “Good War” narrative.

But just as a commentator for the Village Voice recently observed that “Vonnegut has outlasted the counterculture that embraced him,” I would argue that his most famous book transcends its immediate historical moment. It is really a meditation on the dignity, courage, and shattered dreams of the Great Depression generation. Its power and moral urgency come from sources far removed from the ideological wars of its time.

It is important to consider Slaughterhouse-Five within the wider arc of Vonnegut’s career–and, to use another of its concepts, to get it “unstuck in time,” as something more than a 1960s relic. Beneath the structural gimmicks, the sardonic detachment, the childlike prose–all adroitly executed, to be sure–lies a kind of humanism, and even patriotism, that is more enduring than some of its early readers might have suspected.

Vonnegut tells us in the opening chapter of Slaughterhouse that he struggled for a long time to develop a language that would do justice to his “war story,” and for years had no good answers about when his “famous Dresden novel” would finally be completed. He moved cautiously, elliptically toward the task, but we now can see premonitions of his ultimate direction even in earlier works.

In 1961’s Mother Night, Vonnegut wrestled at length with the moral complexities of his war, with a fable about Howard W. Campbell, Jr, an American actor who posed as a rabid Nazi propagandist in Berlin, the belly of Hitler’s beast. In doing his job for army intelligence so well, did Campbell go too far with evil in the service of good?

Two years later, in Cat’s Cradle (1963), the moral inquiry involves the scientists who create doomsday weapons, men like those who worked for the Manhattan Project, or the eccentrics Vonnegut encountered in his public relations job at General Electric after the war. Narrow horizons sometimes blinded them to the havoc wrought by their chalkboard formulas and laboratory gadgets. Cat’s Cradle concludes with an “end of the world” chain-reaction, the result of a substance called ice-nine. Besides evoking the nightmare scenario of the recent Cuban Missile Crisis, it reads today a lot like what Vonnegut must have seen in Dresden.

With God Bless You, Mr. Rosewater (1965), Vonnegut inches ever closer to his own story. The title character, a World War II veteran who shows all the signs of what we would now call PTSD, is a direct precursor to Billy Pilgrim in Slaughterhouse.

And so we come to Billy’s tale, which Vonnegut determined would show the soldiers he knew as the babes in arms they really were, not Frank Sinatra or John Wayne swashbucklers. Subtitled “The Children’s Crusade,” Billy appears as a passive, storm-tossed vessel, a gangling clown, representing the callow youngster the author thought himself to be during his time in combat. Soon enough Billy, a “chaplain’s assistant,” finds himself in a “Mississippi of humiliated Americans,” herded to collection points for the ride east. (In interviews, Vonnegut recalled being thrown into the disintegrating lines of the American front in December ‘44, an army scout wandering, lost in the snow, with a ragtag collection of other frightened novices–“I imitated various war movies I’d seen,” he once said.)

Billy attracts the unwanted attention of bullies along the way. But Vonnegut conveys the humanity and brotherhood the prisoners were able to muster, even in their collective misery. Crammed willy-nilly into sealed cattle cars to be transferred into Germany, many died during the halting ordeal. They were bombed and strafed by Allied planes, and one’s sense of time was all but obliterated. “Christmas was in there somewhere,” Vonnegut writes. Even with its Dante-like horror (Primo Levi would write in his memoirs of similar things, drawing on experiences on the other side of Europe) the scene is also a stage for community in its most idealized form.

Here is Vonnegut’s description, full of otherworldly wonder, of the boxcar society he experienced:

Human beings in there were excreting into steel helmets which were passed to the people at the ventilators, who dumped them. Billy was a dumper. The human beings also passed canteens, which guards would fill with water. When food came in, the human beings were quiet and trusting and beautiful. They shared.

Once at a prison camp, the Americans seem wretched and demoralized to the British soldiers who greet them, men who have long ago adjusted to their confinement. Urged to choose a leader, for purposes of discipline and self-respect, the Yanks halfheartedly elect the oldest man in their midst, an unassuming middle–aged high-school teacher from Indianapolis named Edgar Derby, who emerges as the moral center of the book.

“Poor old Edgar Derby,” as Vonnegut refers to him, had pulled strings to enlist at his advanced age, and now, as a POW, takes his leadership responsibilities seriously. He finds meaning and purpose in a fate that brings out the worst in others. He is kindly and attentive, a father who looks after his charges in the camp as he worries about his son serving out in the Pacific.

Vonnegut is, in important respects, Edgar Derby rather than Billy Pilgrim. In a letter from a Red Cross station in France in late May of 1945, published for the first time in the posthumous collection Armageddon in Retrospect (2008), Vonnegut, still severely underweight but otherwise intact, reassured his family that he was alive, and told of how he had used what little German he knew to try to defend his mates from the gratuitous excesses of their custodians.

“After desperately trying to improve our situation for two months,” Pvt. Vonnegut typed in his accounting, “…I told the guards just what I was going to do to them when the Russians came. They beat me up a little. I was fired as group leader.”

Gregory Sumner teaches American History at the University of Detroit Mercy. He is the author of Dwight Macdonald and the Politics Circle (Cornell Press, 1996), and is completing Kurt Vonnegut and the American Dream, a companion to the writer's fourteen novels.