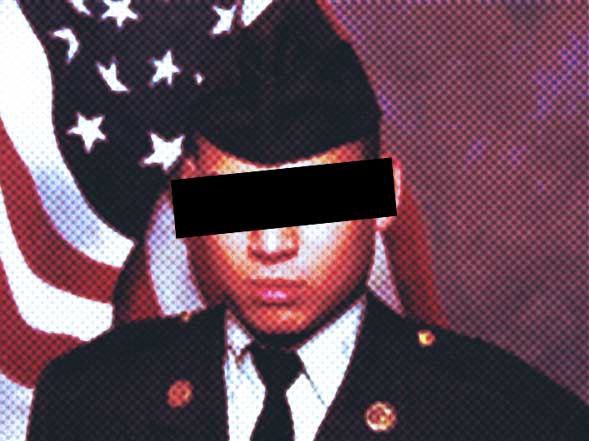 In 2003, four U.S. soldiers were charged with brutally murdering another member of the Army. A new book examines what happened, and why.

But those who knew and loved him say a big part of Davis died six years earlier, when his only son Richard was murdered at Fort Benning, Ga.–just days after returning from Iraq, and before he had even seen his parents. Richard’s body was found in a field near the base–dismembered, burned to a crisp, with jagged holes in his skull and teeth knocked out. Four of his fellow soldiers were charged.

A fictionalized account of Davis’ mysterious murder is given in the 2007 movie In the Valley of Elah. In Murder in Baker Company: How Four American Soldiers Killed One of their Own (Chicago Review Press, February 2010), Georgian author Cilla McCain tells the true story. She answers many of the questions raised by the movie, and clears up the queries that commonly run through viewers’ minds during films based on true stories: “Did that part really happen?” In this case, the most shocking and disturbing events did indeed occur.

McCain does not prove, or even posit, exactly who murdered Davis, and why. But through this story she sheds light on the U.S. military’s disturbing practice of covering up murders and other noncombat-related deaths among troops, ignoring post-traumatic stress disorders, and allowing predators and dysfunctional systems to continue to victimize others. Unlike the movie, McCain develops the characters of the four soldiers accused of Richard’s murder, showing the debilitating, frightening and sometimes contradictory effects war and military culture can have on impressionable, insecure and potentially aggressive young men.

Despite exhaustive reporting by McCain, it is hard to get a clear picture of Richard Davis. Was he inquisitive, loving and something of an awkward outcast, as anecdotes and testimonials suggest? Or was he a bigoted aggressor who harassed strippers and tortured Iraqi prisoners, as others say? Chances are he was a combination of all these qualities and more, a mass of contradictions like many young men thrown at an early age into the horror of war.

McCain follows the twists and turns of Davis’ murder and the ensuing investigation, subtly making larger points about a brutal and intentionally obfuscatory military culture.

The most stirring character in the story is Richard’s father, Lanny, a lifelong patriot who swelled with pride as his son followed in his footsteps, striving to live up to his father’s expectations. It is painful to read how Lanny begins to realize he has lost not only his son but his faith in the country and system to which he dedicated his life.

As military brass repeatedly disrespect, ignore and deceive Lanny, he takes it upon himself to investigate his son’s murder. But each answer seems to trigger more questions. As we get a clearer picture of the four men who were likely parties to the killing, we see that at least two of them are in some ways victims themselves–of both the effects of war and socio-economic factors beyond their control. As with prisoner abuse at Abu Ghraib and other atrocities in recent wars, perpetrators were served a modicum of justice while higher-ups who allowed, or even ordered, the behavior got off scot-free. (There’s no indication that higher-ranking officers were party to Davis’ murder, but McCain finds that officers cavalierly ignored threats toward Davis and general signs that mentally unstable troops under their command were prone to wanton violence.)

Ultimately, was Davis’ murder a drunken, spontaneous and meaningless act by young men who were themselves scarred by war, including their company’s participation in the April 2003 Midtown Massacre in Baghdad, where U.S. troops gunned down more than 100 supposed enemy combatants, many of them unarmed and likely civilians? Was it the culmination of a personal feud? Could there be any connection to the murder and the military’s attempts to cover up the horrific details of the Midtown Massacre and other incidents in Iraq? Is it significant that Richard’s phone calls to Lanny from Iraq, as he pleaded for help and described appalling conditions, were cut off mid-conversation?

McCain notes that she was motivated to take on this story partly by the memory of her uncle, a veteran and son of a veteran, who was severely beaten by military police officers in a bar near Fort Benning shortly after returning from Vietnam. As a young girl, she was shocked by the realization that officers were abusing their power, in this case attacking her uncle because he looked like a hippie.

Murder in Baker Company is more than just an impressive true-crime narrative, as McCain developed both a deep respect for Lanny Davis and a sense of responsibility to troops and veterans like him who have been neglected and betrayed after sacrificing so much.

“Issues of crime, gang violence, rape, mental illness and war atrocities surround Richard’s tragic murder and others like it,” McCain writes. “Like Lanny Davis, a patriotic man who devoted his entire life to the service of our country and lost not only his beloved child but also the faith and trust he once proudly displayed in the military system and America in general, some U.S. soldiers are finding the very foundation of their beliefs crumbling to dust.”