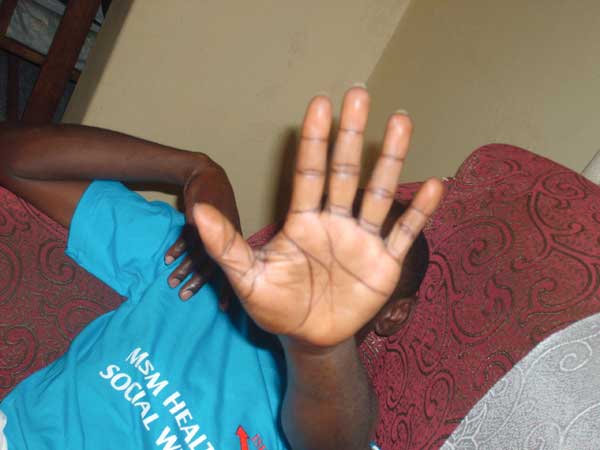 Gug protects his anonymity at home. (Photo courtesy of Gug.)

A gay Ugandan blogger tells his story to the world.

INTERVIEW: Gug speaks out: ‘It’s a risk I have to carry.’

On January 4, Gug (a pseudonym), who blogs on Gay Uganda, talked to

In These Times about his hopes and fears. He spoke about how Americans can help ensure that he and his fellow gay Ugandans are not executed by their government for committing "aggravated homosexuality." Because his mobile phone and landline are controlled by the Ugandan government, Gug used the Internet telephone service Skype for this interview.

You are a thorn in the side of the Ugandan government right now.

Are you concerned that they will identify you and that you may be arrested?

The Red Pepper, one of Uganda's papers, outed me. But it's a risk that I have to carry. At the moment it is the international exposure that is a kind of protection.  Though, it is not very good protection, of course. [laughs]

How did you feel back in October, when the Anti-Homosexuality Bill was introduced?

At the beginning, it was like the bill was going to pass without discussion, without anybody saying, "Nay."

I read that supporters of the bill are calling for a national march on January 19.

Pastor Martin Ssempa, the chief backer of the bill, is organizing churches' call for people to come from upcountry to Kampala and march on parliament. They want to make sure the bill passes with as little change as possible. We've heard reports that President Yoweri Museveni assured the U.S. State Department that the bill will not be passed. So, they want to make sure that that does not occur.

What can the average American do to support your cause?

Right now, Uganda is getting a lot of military aid from the Unites States because there is the war on terror, which is in Somalia.  And because of this, that means that the Obama administration has a lot of clout with [Museveni]. I am very sure that pressure on my end is not going to do any trick. But I am also sure that if there is pressure on the government of Uganda from the United States, this bill will not become law.

Have you and your partner made any plans in the case that you need to leave Uganda?

Uganda is a very beautiful country. This is our home. My partner and I are united in that. So these guys want to come and kill us? No! This is our country. We do not want to go to Europe.

How has your activism affected relations with your family?

I don't discuss my sexuality much with most of my family. I know my father is following this avidly. Well [laughs], the last few months, he asked me if I should not get out of the country, so I know he is worried. But I can't, of course, tell him that I am doing this sort of activism, which I think he suspects. Some [family members] I am not able to engage at all, the subject does not arise. It's that kind of thing. We just don't talk about it.

Through the Gay Uganda blog, you have played a significant role in getting this story out to the international community. Are you surprised at the following that you've developed?

When I first got copies of this bill, I was very unhappy and depressed, because I knew the bill was going to become law without my doing anything to stop it. Then, I realized, I can rely on the kindness of strangers. People outside Uganda are the ones who are helping us. I want to thank them. If it wasn't for the fact that they are putting so much pressure on their governments, my government wouldn't think twice about making this bill law.

As the early morning sun rose over Kampala on Oct. 14, 2009, Gug lay in bed and contemplated his life. (“Gug” is a pseudonym he uses on his blog, GayUganda.blogspot.com, which provides a rare view into the LGBT experience in his country.) Regular power outages yield dead laptop batteries. They also assure intimate candlelight dinners…and sex. For this workaday poet in his mid-30s, it was time to wake up and face the harsh realities and intoxicating beauty of his country, a juxtaposition he knows all too well. By lunchtime, his life as a gay Ugandan would become riskier than he could imagine.

That day, “The Anti-Homosexuality Bill” was introduced by Ugandan Member of Parliament David Bahati. Gays have faced legal persecution in Uganda for decades, a vestige of British anti-sodomy laws that predate the country’s independence. Homosexual sex currently carries a 14-year maximum sentence in the country, but the new bill adds the definition of “aggravated homosexuality,” which would carry the death penalty. This would apply to “serial offenders,” those “living with HIV,” anyone who uses drugs or alcohol in the commission of the crime, and anyone who has sex with someone who is disabled or under 18 years of age. The bill also adds prison sentences for anyone who “promotes homosexuality” or knows of it and fails to “disclose the offence,” including parents that fail to inform on their children. Uganda’s parliament may take up the bill soon after reconvening on February 15.

Vocal condemnations of the bill have been issued from across the world.  These include repudiations from a handful of American congressmen and Christian leaders, who–as it turns out–have traveled frequently over the past decade to Uganda, laying the groundwork for a revived anti-homosexuality campaign.

Perhaps the most influential international voice on the issue is the high-profile evangelical pastor Rick Warren, founder of the California-based Saddleback megachurch. In 2005, he welcomed Martin Ssempa to his congregation to present on HIV/AIDS prevention in Africa. Ssempa, a prominent backer of the Anti-Homosexuality Bill, is a charismatic pastor from Kampala and a longtime antigay activist in Uganda. For many years, he has waged a campaign to publish the names of suspected gays, causing them to go into hiding.

In March 2008, Warren traveled to Uganda to show his support of the country’s Anglican bishops who were protesting the Church of England’s tolerance of homosexuality. Criminalization of homosexuality in Uganda is often justified by Warren’s widely circulated edict: “Homosexuality is not a natural way of life and thus not a human right.” In addition, anticolonial sentiment has long fueled the ignorant belief that homosexuality is a Western import. Bahati alleges that foreign and non-governmental organizations, including UNICEF (the United Nations Children’s Fund), actively promote homosexuality.

Tweeting from the closet

The actions of these politicians and religious leaders have dramatically changed the lives of gay and lesbian Ugandans. On Dec. 30, 2009, Gug was outed in an article in The Red Pepper, a newspaper published in Kampala.

Well aware that state-run media are off-limits, Gug has made rich use of less easily regulated outlets. His blog posts are often delayed due to regular power outages and slow server response times, so many of his most poignant observations are delivered via mobile phone, as he sits in the lush darkness of a central African downpour.

Gug’s Twitter feed describes the increased pressure he feels to go deeper into the closet:

“my friends by law should report me. within 24hrs of knowing i had sex”

“life can be tough. but well, we continue living it. if i tweet every time after sex i will keep a record.”

“a record of the number of lifetimes i should spend in prison. just for making love.”

“seated in the middle of kampala with my partner of years shoulder to shoulder. yeah. homophobic uganda”

Gug also provides a deeper assessment of the reality of his homeland, again on Twitter: “living in uganda, its tough to reconcile the ugly, and the beauty of life. they present side by side.”

According to American journalist Jeff Sharlet, author of the 2008 book The Family that exposed the U.S. congressional ties of a secretive group of Christian power brokers of the same name, Bahati is a “core member” of the group. According to Sharlet, The Family preaches a gospel of “biblical capitalism,” which blends evangelical Christianity, right-wing politics and free marketism into a worldview that celebrates power as a reflection of God’s grace.

Bahati has organized the Ugandan National Prayer Breakfast along with James Nsaba Buturo, the country’s Minister for Ethics and Integrity. Sharlet has recently detailed the deep connections between U.S. Sens. John Ensign (R-Nev.) and Jim Inhofe (R-Okla.) and Uganda’s leadership over the past decade, particularly as military and infrastructure aid has flowed to Uganda from the United States. This includes a $15 million “abstinence only” anti-AIDS campaign, which is credited with halting the nation’s once-robust condom distribution programs, and thus almost certainly fostering the spread of HIV.