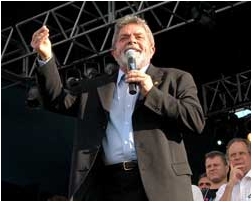 Lula fires up the crowd.

Another World Is Possible

100,000 people traveled to Brazil for the World Social Forum, where the looming war with Iraq dominated the agenda.

BY Ben Ehrenreich
Share TweetReddit0 EmailPrint
Porto Alegre, Brazil—If two words could conceivably sum up the mood at the 2003 World Social Forum, they would be urgency and jubilance—urgency as the war in Iraq creeps closer, and jubilance over Luiz Inacio Lula da Silva’s victory in the Brazilian elections, which was taken by many as a sign that, for the moment in Latin America at least, the new global left has neoliberalism on the run.

Under the slogan “Another World Is Possible,” the forum, an attempt to allow the so-called anti-globalization movement a chance to strategically globalize itself, was held for the third year running in Porto Alegre. The city’s name at times seems tongue-in-cheek—the cranes at its riverside port stand idle, its warehouses sufficiently empty that several were used as cavernous seminar rooms for the forum. But downtown—a cluster of smog-stained high-rises of stucco, tile and glass—bustles well into the night, its streets packed with people shopping and hustling to work or working in the streets themselves, hauling bundles of recycled cans or waste paper on horse-drawn carts, hawking batteries and bus tokens, shoeshines and sex.

And from every corner of the globe, progressive intellectuals and activists wearing the red and yellow badges of the World Social Forum helped pack the street corners, wandering in small herds between hotels, cramming into city buses for long, sweaty rides to forum sites distributed on disparate ends of town.

Forum organizers say the event almost doubled in size since last year, with nearly 100,000 people attending—mainly Brazilians, but with more than 1,000 Americans as the second-largest national contingent and many others from all over Latin America and from every continent save Antarctica. (Interestingly, the American press corps didn’t even make it into the top three; much of our mainstream media were apparently too busy covering the rival World Economic Forum in Davos, Switzerland.)

It’s anybody’s guess, though, how many people really showed up. The police count was 70,000 at the opening-day rally on January 23, where banners in Japanese, Spanish, English and Arabic shared space with a sea of red flags from Brazil’s Workers Party. But most of the time the forum-goers were spread throughout hundreds of halls and seminar-rooms across the city, and much of the forum’s real work—informal networking and organizing among activists—took place invisibly in bars, restaurants and hotel rooms. But 100,000 doesn’t seem far off, judging by the endless expanse of tents that crowded the “youth camp” in a park along the river and by the length of time it took to walk even a few yards at one of the forum’s central locations, the campus of the Pontifical Catholic University (its acronym, PUC, delightfully pronounced “pookee”).

The sheer size of this year’s forum bred a degree of optimism (and a perhaps greater degree of chaos—complete programs were not available until the event’s third day) that mated happily with the residual jubilation of Lula’s victory. The mere mention of the Brazilian president’s name was enough to win any speaker a deafening ovation. Lula’s speech at an outdoor amphitheater on January 24, attended by hordes of shirtless youth standing in the sun, chanting, singing and dancing, had more of the energy of a pop concert—Lulapalooza, perhaps—than a political rally.

In past years in Porto Alegre, the forum’s tone has been more defensive, the movement’s self-image embattled. The first forum was preoccupied with the increasingly militarized response of European and North American governments to street protests. Last year’s, despite the shock of the September 11 attacks, took place equally in the shadow of the proposed Free Trade Area of the Americas. This year that threat still loomed, but speaker after speaker referred to “the failure of neoliberalism” and “the end of the illusion of neoliberalism,” even neoliberalism’s “defeat,” as a fait accompli.

When the cheers died down though, the grim prospect of war in Iraq was everywhere in evidence. Billboards placed by the Brazilian Communist Party, condemning imperialism and demanding peace, rose above Porto Alegre’s highways. A small Iraqi delegation wandered from event to event, waving Iraqi flags and eliciting more puzzlement than applause. Posters of Bush with a Hitlerian mustache were taped to nearly every free wall at the forum and captioned, “Bush out! Iraqi oil belongs to the Iraqis!” Even the facade of a local shopping mall was adorned with a giant blue banner reading, “paz.”

Within the halls of the WSF, speaker after speaker opened with comments on the urgency of the current crisis. “We meet at a very critical time in history,” the London-based Pakistani writer Tariq Ali told a crowded stadium audience. “We are on the eve of a new war.”

“I come here with a sense of urgency,” announced Medea Benjamin of Global Exchange, before updating the forum on the efforts of the American peace movement.

“We’re meeting at a moment in world history that is in many ways unique,” said Noam Chomsky on the final day of the events. “It is ominous but full of hope.”

Gone, it seems, are the not-so-distant days when the diminishing importance of the nation-state was on most everyone’s lips in the global justice movement, when something called “corporate globalization”—as much a European offspring as an American one—appeared to have displaced imperialism as the common enemy of the left.

But the raw arrogance of the Bush administration’s foreign policy, its refusal to make even a Clintonian show at diplomatic politesse, has rendered “empire” synonymous with the United States. At the same time, the Bush administration has allowed the global justice movement, within the United States and abroad (as many as 1 million activists marched against the war in November at the European Social Forum in Italy), to transition fairly smoothly into a worldwide anti-war movement.

“Bush campaigned with a unity-not-divisiveness slogan,” said Steve Cobble, an American delegate from Washington’s Institute for Policy Studies. “He’s clearly united the whole world against our war in Iraq”—and against the United States more generally. References to the United States as a “gangster state” worked as applause lines almost as effectively as the two syllables of the Brazilian president’s name.

The most urgent problem was no longer a vast and often invisible tangle of predatory corporations, national governments and compliant international institutions, but the single enemy of American aggression, be it military or economic. “If we are going to fight for a better world, then our struggle cannot be separated from a struggle against the hegemony of the United States of America,” said Achin Vanaik, a delegate from India (where, incidentally, next year’s forum is scheduled to be held).

Through all of this, though, came praise for the American peace movement, and a recognition that change would likely have to start within what Tariq Ali called “the heartland of the empire.” “It is extremely important to build the largest possible anti-war movement, including the United States,” he said, expressing a sentiment voiced by many. “And one of the things we have to pay tribute to is the 400,000 who marched in Washington in opposition to their own government.”

Others, such as Ugandan trade activist Yaspal Tandon, focused more on obligation than accomplishment. Speaking of the hypocrisy of calling oneself democratic while oppressing others abroad, and suggesting a replacement for the neoliberal Washington consensus, Tandon said, “I would propose that part of the Porto Alegre consensus be to ask, to demand of our American brothers and sisters here that they carry with them an enormous responsibility. Above all, we beseech the people of America to democratize their society.”

Despite the omnipresent urgency, the anger and alarm, the third World Social Forum ended on a note of almost ecstatic optimism. Indian author Arundhati Roy delivered the closing oration to a crowd of thousands packing every last corner of Porto Alegre’s Gigantinho Stadium. After delineating the horrific legacy of neoliberal policies in India—the damage wreaked by privatization and land and labor “reforms,” the rise of an ultranationalist elite, the state-approved slaughter of 2,000 Muslims in Gujarat last March—Roy reminded the crowd of its own power. “We are many, and they are few,” she said. “They need us more than we need them. Another world is not only possible, she is on her way. And on a quiet day, if you really listen, you can hear her breathing.”