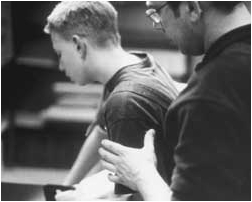 Workplace tension: Morgan Marinne and Olivier Gourmet in The Son

BY Joshua Rothkopf
Share TweetReddit0 EmailPrint
When people complain about the movies being too fake or showy or otherwise lacking in depth, I have to wonder if they really want the pain. It’s pretty intense. Characters that are distressingly human: vulnerable, confused, with only their routine jobs and an uncertain grace to work for. A central drama that is intimate yet socially and politically relevant, perhaps upsettingly so. And an ending that signals not resolution but the posing of difficult ethical questions that fully intend to chase you back home and to work the next day.

Jean-Pierre and Luc Dardenne have made that film. Actually, they’ve made it three times now. The Son, like the Belgian brothers’ previous features Rosetta and La Promesse, burrows deep into the anxieties of a working-class protagonist (“hero” would be plain wrong) without even a hint of sensationalism—or even a musical score—to help us along. This time, though, the Dardennes have added an expressly spiritual dimension to the mix; the allegorical plot follows a modern-day carpenter forging an uneasy relationship with a young, possibly undeserving apprentice.

The Dardennes build drama slowly and deliberately, often perching their handheld cameras right at their subjects’ earlobes or on the backs of their necks. It’s an odd choice, but one that works improbably well in achieving intimacy; it’s how we first meet Olivier (Olivier Gourmet), balding and squeezed into his workman’s leather corset. We pursue him as he paces though his domain, a vocational school’s woodshop, stopping here to inspect a student’s template, there to dislodge a plank from a dangerously shrieking tablesaw. The nice long take establishes both Olivier’s command—the authority that comes from years of working with tools—and an uncommonly meticulous depiction of a place of work. (The brothers made documentaries for 20 years before turning to narratives.)

From these purposeful beginnings grounded in the comforting precision of woodworking, mysterious clues begin to accrue. A secretary enters and asks Olivier if he has room for another student. Inspecting the candidate’s record, he declines her request but secretly follows her back to her office and watches a young hand signing an enrollment form. Later that evening, a smiling woman shows up at Olivier’s neat apartment. They speak casually from obvious past intimacy, and we soon learn she’s his ex-wife; she’s getting remarried and is pregnant. Back at work, he continues spying on the new student (Morgan Marinne), a blond teen-ager assigned to the metal shop, and suddenly seems to change his mind. Entering the locker room silently, he observes the boy, asleep on a bench. After a moment, he bangs on the locker and tells him he’ll take him on.

It all feels a little unseemly, these first 20 minutes of stalking and tense instruction: how to unfold a ruler, how to oil it. You wonder if Olivier’s strange behavior is somehow related to his ex-wife’s new happiness, or worse. But then, with a single shocking line of dialogue, the Dardennes turn their film on its head and everything becomes movingly clear. It’s a revelation impossible not to discuss for the purposes of this review, and the key to The Son’s undeniable power. If you’re already convinced, you may want to read no further.

The teen’s name is Francis; he spent five years in prison for murdering Olivier’s son—a tragedy that led to the ruination of the marriage. On a dime, all of the taut exchanges and wary silences are filled with pain as The Son leaps to a level of philosophical inquiry rarely seen in the cinema. The Dardennes, as if waiting for the moment, suddenly rotate their cameras around to Olivier’s face, capturing his subtlest reactions to the boy’s every unintentionally hurtful word. (Gourmet is a marvel in the part.) Is he trying to reclaim some sense of the son he lost or plotting his revenge? This is filmmaking at its most precarious: the mechanics of suspense yoked to exquisitely moral ends.

Lessons in carpentry take on the weight of parables as his attentions shift from fatherly to menacing and back again; the Dardennes never settle. Olivier teaches Francis about fine grains of wood, seethes as he pilots his car while Francis slumbers obliviously in the front seat, slams on the breaks flinging him forward. The Dardennes never demonize Olivier, a good man distracted by dark thoughts, nor do they sanctify Francis, whose surly aloofness would make him a problem case even without his past. “Who do you think you are?” screams the ex-wife, confronting Olivier in a parking lot, on to his little project. He can’t say, and in deference to that honesty I won’t either. But identifying with Olivier shouldn’t be difficult for those who suspect that living with evil, rehabilitating it, is harder than vanquishing it, and a path of virtue. Can there be a more timely movie?