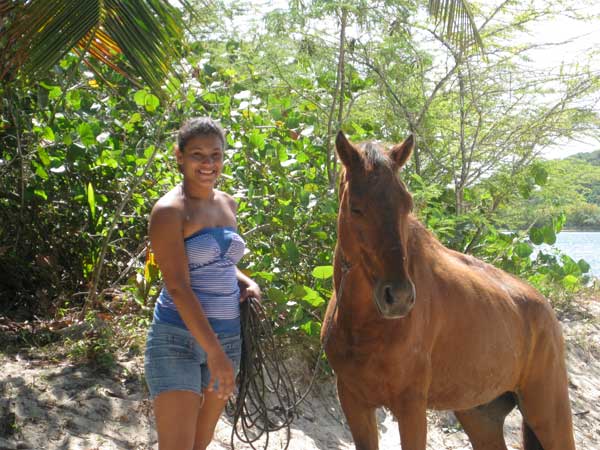 Coral Rosa, 16, who was born with "blue baby syndrome," is one of 7,000 plaintiffs in the lawsuit against the U.S. government. (Photo courtesy of Jacob Wheeler)

The Poisoning of Puerto Rico

The U.S. Navy left Vieques, but for many, the cancer remains.

When Coral was six-months-old, doctors found eight tumors in her intestines and stomach. The day before Coral’s first birthday, they told Nanette to celebrate because this would be her baby’s last.

VIEQUES, PUERTO RICO–On March 31, retired Sgt. Hermogenes Marrero was told during a visit to the Veterans Affairs (VA) outpatient clinic in Mayaguez, Puerto Rico, that he didn’t have cancer – or at least, his official VA computer file no longer showed any record of cancer.

But Marrero was not relieved. He had been diagnosed twice before with colon cancer and suffers today from a dozen other illnesses, including Lou Gehrig’s disease, failing vision, a lung condition that keeps him on oxygen around the clock, not to mention tumors throughout his body. The terminally ill and wheelchair-bound, 57-year-old veteran immediately suspected that the U.S. government had manipulated his medical record.

Marrero is the star witness in a lawsuit filed in 2007 against the U.S. government by Mississippi attorney John Arthur Eaves on behalf of more than 7,000 residents of the picturesque, yet heavily polluted, Puerto Rican island of Vieques. From 1941 until 2003 the U.S. Navy operated a base here, conducting bombing runs and testing chemical weapons for use in foreign wars, from Vietnam to Yugoslavia to Iraq.

Early in World War II, when fortunes looked grim for the Allies, the U.S. Navy occupied three-quarters of Vieques, which sits eight miles from the Puerto Rican mainland, moved one-third of its population to the nearby Virgin Islands, and planned to relocate the entire British fleet there in the event of a German invasion of England. Instead, Vieques became the U.S. testing ground for nearly every weapon used during the Cold War.

Though Marrero spent only 18 months on Vieques during his tour in the early 1970s, the Special Forces Marine suffers today from many of the same medical conditions as the local population. The Puerto Rican native, raised in Queens, N.Y., arrived on the island in 1970 with the task of guarding the vast array of chemical weapons the Navy stored and tested there. Marrero was exposed to toxics, including napalm and Agent Orange – which at the time he thought was weed killer. He developed massive headaches, bled from his nose, and suffered nausea and severe cramps. “I witnessed some of the most awesome weapons used for mass destruction in the world,” Marrero says. “I didn’t know how dangerous those chemicals were, because it was on a need-to-know basis.”

Today Marrero waits in the city of Mayaguez in western Puerto Rico for his chance to testify in court against the U.S. military for poisoning the people of Vieques and U.S. soldiers based there.

“These are American citizens, yet we violated their human rights,” says the humbled former Marine. “This would never have been allowed to happen in Washington or Seattle or Baltimore.”

The king can do no wrong

Before John Arthur Eaves’ lawsuit can be heard, however, it must first be approved by the First Circuit Court in Boston after the suit was rejected on April 13 by federal judge Daniel R. Dominguez, who sits on the U.S. District Court in San Juan. Eaves will officially appeal the case to the First Circuit Court early this summer. But the U.S. Navy has invoked sovereign immunity, a strategy that comes from the monarchic period when kings were immune from being sued. Unless a federal judge in Boston rejects sovereign immunity, no scientific evidence will ever reach the courtroom.

“The U.S. government wants the case to be dismissed – the ‘king can do no wrong’,’ ” says Eaves. “We claim their actions should not be protected under sovereign immunity, because when the government steps outside its discretion, its actions are no longer protected. We know that in at least one year the Navy violated the Environmental Protection Agency’s [EPA] standards 102 times.”

Washington rejects allegations that the Navy’s activities on Vieques poisoned residents – even though the government has admitted the presence of napalm, agent orange, depleted uranium, white phosphorous, arsenic, mercury, lead and cadmium on the former bombing range. In February 2005, the EPA identified Vieques as a Superfund site, which placed the cleanup of hazardous sites in federal hands.

In its defense, the U.S. government cites a controversial 2003 study by the Centers for Disease Control’s Agency for Toxic Substances and Disease Registry (ATSDR). But Arturo Massol, a biologist at the University of Puerto Rico who has studied toxic contamination on Vieques, calls the ATSDR study unscientific, if not outright criminal.

“A battalion of researchers came here and used poorly designed scientific experiments to conduct a political assessment that intentionally covered up reality,” Massol says. “The Navy is gone, but these agencies should be charged as accessories to murder because preventative policies could have been established after 2003.”

The bombing range on eastern Vieques was indisputably subjected to more than 60 years of non-indigenous chemicals, Massol says. There are no other sources of industrial pollution on the island. Those toxic metals accumulated in the biomass of plants and were eaten by grazing cows and fish. Once pollution reached the vegetation and the base of the food chain, it was transferred into humans. Massol and other independent scientists found that Vieques animals had 50 times more lead and 10 times more cadmium than animals on mainland Puerto Rico.

Under President Barack Obama, however, the U.S. government has shown signs of changing its tune. A U.S. congressional investigation last May into Hurricane Katrina trailers contaminated with formaldehyde accused the ATSDR of colluding with the Federal Emergency Management Agency (FEMA) to “deny, delay, minimize, trivialize or ignore legitimate health concerns.” When the Vieques case resurfaced, a team of ATSDR scientists began re-examining environmental health data on the island.

On Feb. 12, 2008, during his heated primary campaign against Hillary Clinton, then Sen. Obama wrote a letter to Puerto Rican Governor Acevedo Vila, stating that, were he to be elected president, “My Administration will actively work with the Department of Defense as well to achieve an environmentally acceptable clean-up … We will closely monitor the health of the people of Vieques and promote appropriate remedies to health conditions caused by military activities conducted by the U.S. Navy on Vieques.” Yet today, the Obama White House remains silent on the issue.

Living in the line of fire

Nanette Rosa, a plaintiff in the lawsuit, remembers what daily life was like in the Vieques village of Esperanza when the Navy airplanes took off from the island’s west coast and flew overhead to drop bombs in the east.

“When the wind came from the east, it brought smoke and piles of dust from where they were bombing,” Rosa says. “From January until June, they’d bomb every day, from 5 a.m. until 6 p.m. It felt like you were living in the middle of a war.”

Her neighbors in Esperanza developed breathing problems and skin rashes. Then in 1993, Nanette traveled to the port town of Fajardo to have her fourth child, Coral. The girl weighed only four pounds and doctors diagnosed her with “blue baby syndrome” (a result of high nitrate contamination in the groundwater, which decreased her oxygen-carrying capacity). Doctors in San Juan performed a colostomy on Coral, and when she was six-months-old, they found eight tumors in her intestines and stomach. The day before Coral’s first birthday, Nanette was told to celebrate because this would be the baby’s last.

Instead, in January 1995, Nanette sold her new house for a $600 plane ticket and flew to Brooklyn to seek help. Doctors at Kings County Hospital removed half of Coral’s intestines and stomach, which saved her life. Broke and without financial support, Nanette spent three months sleeping on a bench in the hospital.

Miraculously, Coral is alive today and about to turn 17. Her cancer is in remission, but doctors recently found three lumps in one of her breasts. Coral’s younger sister Ainnanenuchka, 14, has been diagnosed with Ewing’s Sarcoma (cancer in her blood and bones), and part of her leg was removed and implanted in her chin.

“I’m 100 percent confident that the lawsuit will succeed, because the Lord told me so,” says Nanette, now 38 and a Pentecostal optimist. “I read in the Bible that every damage caused to the Earth has to be repaid.”

And if the lawsuit doesn’t succeed?

“I leave it in God’s hands. If I have to go to jail, it’s worth it to save my daughters’ lives.”