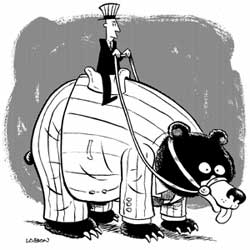 How to salvage a broken economy

BY Dean Baker
Share TweetReddit0 EmailPrint
In last issue’s “Bursting Bubbles: Why the economy will go from bad to worse,” economist Dean Baker examined how the boom economy of the ?90s was built on three unsustainable bubbles. One—the stock bubble—has already burst. The other two bubbles—the dollar bubble and the housing bubble—are still with us, but not for long. These bubbles created the basis for the 2001 recession and the economy’s continuing period of stagnation.

In this issue, Baker outlines a course of action for progressives to seize the economic agenda.

In the years ahead, the basic economic problem confronting us will be how to maintain demand, and therefore employment, as the combined effect of the collapse of the stock and housing bubbles send investment and consumption demand plummeting. The falling dollar will help to stimulate demand, since it will make our exports more affordable elsewhere in the world. At the same time, it will make imports more expensive. This will stimulate the economy by increasing demand for domestically produced goods, but at the same time will lead to somewhat higher inflation, as rising import prices get passed through the economy.

One key policy prescription will be to ignore the inflation. There is no economic harm from a modest rise in the inflation rate (1 to 2 percentage points). The Federal Reserve Board should be forced to accept the higher inflation that will inevitably result from a falling dollar, rather than trying to squeeze out the inflation through a policy of high interest rates, which will raise the unemployment rate.

The second point is that we should not be concerned about near-term deficits when the economy is in a slump. We need these deficits to boost the economy. Large deficits (for example, more than $250 billion) are a problem when the economy is operating somewhere near its potential output, but bigger deficits are actually better when the economy needs demand to offset the damage from the collapsing bubbles. Much of this demand will have to come from the government. Firms will be reluctant to invest as long as they have large amounts of excess capacity and the economy seems weak.

Consumers should not be looked to as a source of increased demand because they have already been spending too much and running up too much debt. With tens of millions of baby boomers approaching retirement with almost nothing in the bank, it is essential that consumers increase their savings. In time, foreign demand for U.S. exports can and should be a big boost to the economy, but even after the dollar falls to a sustainable level, it will be several years before trade patterns adjust to reverse the current trade deficit. So, government deficits will be an essential prop to the economy for the near-term future.

Of course, all deficits are not the same. Instead of running deficits to give tax breaks to the rich and dollars to defense contractors, as the Bush administration and the Republican Congress are doing, we should look to orient spending to areas that will build a sound basis for prosperity in the new century. The dividend tax cut looks almost like a joke in this respect. If the intention is to spur business investment, the tax cut is about the most indirect way imaginable, since it will have at most a limited impact on stock prices—and stock prices have almost no effect on investment apart from the bubble period of the late ’90s. By creating a new category of tax-exempt income, the dividend tax cut will be a boon to the tax shelter industry, as the wealthy find ways to hide more of their income as dividend income. Stimulating the tax shelter industry and giving more money to the wealthy are the only plausible motives of such a narrowly targeted tax cut.

On the contrary, extending unemployment benefits and substantial revenue sharing to state and local governments to prevent cutbacks of important services should be no-brainers in the short-term. The longer-term list of neglected needs has many candidates. It is widely recognized that the health care system is broken, with costs spiraling out of control and the quality of care and coverage falling rapidly. Upfront spending to create a universal system comparable to Canada’s would quickly be paid back, both in savings to the private sector and in the improved health and security of the population. Similarly, a system of universal child care that guaranteed working mothers decent care for their children would produce large gains for parents and children.

Other top priorities should include rebuilding the nation’s transportation system on a more environmentally friendly path. This would include more support for mass transit and also the resurrection of the national train system. An obvious alternative to spending endless billions to protect the air transit system from terrorist attacks is to promote forms of transit, like trains, that don’t face the same risk. Support for clean energy sources that are already almost competitive, such as wind energy, can produce large dividends as well.

It would also be good to see the United States actually playing a productive role in promoting world development for a change. In the last few years, the United States has been a massive borrower of capital from the rest of the world. The poor in developing countries are effectively lending money to U.S. consumers to buy the shoes, textiles, computers, and other products that they produce. It would be much better if the loans (or grants) went in the other direction—with the United States providing the capital that these countries need to build their infrastructure and get themselves on a sound footing.

While this list may seem extravagant, there are two points worth keeping in mind. First, many of these items are real investments in the sense that they will produce payoffs, often in the very near-term future. Health care stands out in this respect. A workable system will likely require more money being funneled though the government, but the savings to the private sector would be enormous. If the U.S. health care system were only as efficient as the second most inefficient system in the first world (Germany), it would save the public approximately $300 billion a year, more than $4,000 for a family of four. The other proposals will also offer gains that offset the necessary upfront expenses, although the net benefit may not be so overwhelmingly positive.

The second point is simple, but important. People can actually be made poor by too little demand on resources, rather than too much. This was exactly the situation the country faced in the Great Depression. If the government had just paid people to drive around and throw money from car windows, it would have brought an end to the Depression. Eventually, it did end the Depression by throwing vast amounts of money at the economy, but the immediate reason was World War II. The economy will be suffering large shortfalls of demand from the collapse of the stock and housing bubbles. While this will appear to be a period of poverty, the idle resources—unemployed workers and excess productive capacity—are actually a source of wealth. In principle, idle workers and excess capacity mean that the economy could be producing more than it actually is. Alternatively, we could put the unemployed to work, and then all work somewhat less, and still have the same output. The fear of short-term deficits should not prevent the country from putting these resources to work.

Finally, it is important to remember how completely the events of the past few years should discredit the existing elite and the U.S. system of corporate capitalism. We now know that corruption and incompetence are the norm at the highest levels of corporate America. The top executives of huge companies like Enron, WorldCom and Global Crossing are desperately trying to convince the public that they had no idea what their companies were doing in order to keep themselves out of jail. The high-powered boards of these companies are all making similar claims of incompetence. The stock analysts, investment fund managers, the business press and the economic and policy analysts somehow all failed to see any signs of this wreckage coming. The exact division between incompetence and corruption can be sorted out later, but one thing is clear: The current system desperately needs to be overhauled. There is no check on the theft and corruption by those at the top.

Since the Reagan era, the rich have used the political system to pillage the U.S. economy with few obstacles in their path. The inability of the rich to contain their own greed has led to the disaster of the triple-bubble economy. The bursting of these bubbles cannot be prevented, but if progressives seize this failure as an opportunity and organize to regain control of Congress and the White House, the future will be much brighter than the past two decades.