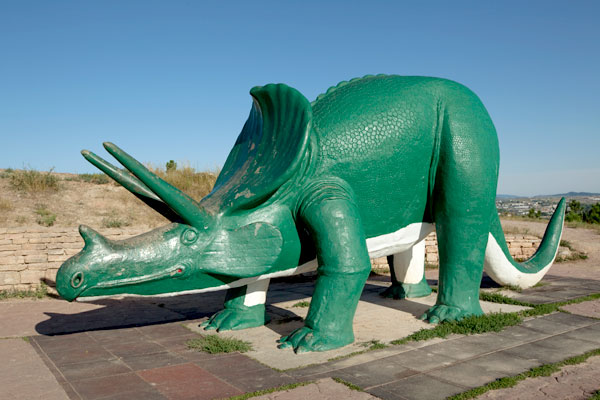 Constructed by the Depression-era Works Progress Administration and dedicated in May 1936, Dinosaur Park in Rapid City, S.D., aimed to capitalize on the tourists visiting Mount Rushmore. (Photo by Carol M. Highsmith/Library of Congress)

A New Day for the New Deal?

Judt stresses that when the state is the problem (Reagan) and when there is no society, only individuals (Thatcher), inequality flourishes and for masses of citizens life chances narrow.

Does anyone still read Erich Fromm’s Escape from Freedom, a staple of my undergraduate education, or John Kenneth Galbraith’s The Affluent Society, a staple of my early years teaching undergraduates modern U.S. history? Or are they relics of my depression-era cohort, the farthest thing from the minds of today’s young people to whom Tony Judt directs Ill Fares the Land (Penguin), his jeremiad about the state of contemporary Anglo-American societies?

I ask those questions because reading Judt’s succinct book harkened back to ideas that I first encountered reading Fromm’s and Galbraith’s erudite yet clearly written indictments of the conventional wisdom as pronounced by advocates of the free market and the minimal state. Judt, one of our most distinguished historians of modern Europe, like Fromm and Galbraith, was born and bred outside the United States. Unlike the latter two who lived long and healthy lives, Judt is a victim of amyotrophic lateral sclerosis (Lou Gehrig’s disease), an untreatable and fatal illness. His ongoing physical deterioration has rendered him unable to write and type, yet it has seemed to sharpen his mind and prose, as anyone who has read his recent essays in the New York Review of Books has discovered.

Like Fromm and Galbraith, Judt disdains a society in which wealth alone is the measure of a person, individualism reigns supreme and the policemen’s baton represents the state’s primary purpose. Like Fromm but unlike Galbraith, Judt knows his Marx, de Tocqueville, Edmund Burke and the real Adam Smith, a philosopher of moral sentiments as well as an imaginary marketplace.

He writes from an unabashedly social democratic perspective, one that might be defined as conservative, for Judt lauds the policies and programs favored by social democrats that made the years from 1945 to 1973 the most secure, prosperous, and egalitarian in the history of Western nations. His social democrats encompass an array of politicians and thinkers from Franklin Roosevelt and Lyndon Johnson, the British, New Zealand, and Australian Labour parties, the Scandinavian and Continental European social democrats, and economist John Maynard Keynes.

“Social Democracy,” he writes, “does not represent an ideal future; it does not even represent the ideal past. But among the options available to us today, it is better than anything else to hand.”

For Judt, social democracy implies cultural and religious tolerance, space for vigorous ideological and political dissent and room for individual idiosyncrasy. Unlike liberals, however, social democrats believe in collective action for the common good; they support progressive taxation to finance public services and social goods that most individuals cannot provide for themselves as a function of a good society rather than as a necessary evil.

Like Galbraith, Judt insists that a society that allows public squalor to coexist alongside private affluence is one in which the state fails its citizens. Like Fromm, he believes a society that condemns too many of its members to lives of material insecurity is one in which the masses will flee from freedom into the embrace of Fascist or Nazi leaders who promise them security in return for obedience. That was why in Europe after World War II, those in political power sought to create public programs that guaranteed all citizens a secure and comfortable material existence, and avoid the mistakes of the interwar years that led to the rise of Mussolini and Hitler. That was why in the 1930s European social democrats admired the New Deal and Roosevelt’s public works programs that built state parks, irrigated much of the arid west, electrified the Tennessee Valley, subsidized construction of colleges and universities, and provided employment for writers, artists and performers. That is also why the Kennedy and Johnson administrations should be admired for expanding the New Deal welfare state and establishing the National Endowments for Humanities and the Arts.

Judt is not a naïve admirer of state power. He remains quite aware of the evils that states may inflict and their tendency to abuse the power of surveillance. Yet he insists that there are many beneficial services that only the state and collective action can provide. He devotes an entire chapter to proving that mass transit can only be properly maintained through public operation and subsidies.

Judt stresses that when the state is the problem rather than the answer (Reagan) and when there is no society, only individuals and families (Thatcher), inequality flourishes, security vanishes and for masses of citizens life chances narrow. He pulls no punches in asserting that the policies implemented by Reagan and Thatcher, policies based on the ideas of the émigré Austrian economists Ludwig von Mises and Friedrich Hayek (and promoted by the Chicago “boys,” most notably Milton Friedman), made the United States and Great Britain the two most unequal societies, the two economies most dominated by an unregulated financial sector, and the two nations with the most dilapidated public sector in the advanced world. Judt indicts the Anglo-American exponents of rational unregulated markets–whose epigones in finance ran wild–for causing the economic collapse of 2008 and nearly bringing on a second global Great Depression.

Where Judt may go astray in explaining the triumph of free-market, neoclassical economics is in a brief chapter that castigates the student rebels and “new leftists” of the 1960s for precipitating the rise of a powerful counter-movement that took power and repudiated the legacy of social democracy. I share Judt’s belief that the 1960s youthful rebels, as beneficiaries of the social security state built by social democrats, took their security for granted and failed to appreciate the accomplishments of their parents’ generation. I understand Judt’s disdain for the individualism that underlay such banal sentiments as “do your own thing” or “the personal is political,” beliefs that led to a preference for “identity politics” rather than collective action that cuts across lines of ethnicity, race and gender. But the student rebels and leftists were not responsible for the economic contraction, the raging inflation and the soaring interest rates (stagflation) that bedeviled Western economies after 1973. It was “stagflation,” partly a result of policies pursued by Judt’s social democratic Keynesians and partly a result of temporary oil shortages–not hippies, yippies, druggies and Weatherpeople–that caused state fiscal crises, generated antipathy to public expenditures and resistance to progressive taxes and brought to political power the free-market exponents of deregulation, privatization and reduced taxation.

For nearly 30 years the advocates of the free market and privatization held sway, causing the most recent catastrophe in a long history of capitalist crises and leading Judt to ask, as Lenin inquired a century ago, “What is to be done?” For Judt the answer is for the social democratic left to write a new narrative that extols the virtue of collective state action for the public good, action that diminishes inequality and restores security to the neglected. And to do so, bearing in mind, as Edmund Burke wrote, that society is “a partnership not only between those who are living, but between those who are living, those who are dead and those who are to be born.”

In his final sentence, Judt reminds us of Marx’s epigrammatic thesis: “Philosophers have hitherto only interpreted the world … the point is to change it.”