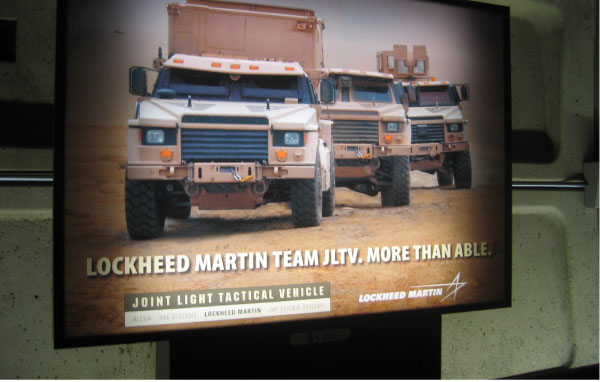 But not surprisingly, the ads are most heavily concentrated at Pentagon City and near government offices at the Federal Center and Capitol South stations.

As a visitor to our nation’s capital, it’s disconcerting to step off a Metro train and find yourself face-to-face with an F-35 fighter jet. Washington D.C.’s subway system, the second busiest in the country, hosts full-color backlit billboards for some of the most deadly–and expensive–weapons systems ever produced.

The ads for Lockheed Martin (the world’s largest arms merchant), Goodrich, KBR, AGI, BAE Systems and Northrop Grumman adorn Metro stations throughout the D.C. metropolitan area. But not surprisingly, the ads are most heavily concentrated at Pentagon City and near government offices at the Federal Center and Capitol South stations. The ads clearly aim to influence key decision-makers, but they also sell to the public the concept that only superior military prowess can protect us from a hostile world.

The billboards range from explicit ads for attack helicopters and combat vehicles to more subtle ads for companies like little-known DRS, owned by Italian weapons maker Finmeccanica and ranked 26 among the top 100 Pentagon contractors. Some are for Dell, which sells “rugged” computers designed to meet Defense Department specifications for military use.

Northrop Grumman’s marketing approach in the Capitol South Metro station, the closest to Congress, is an all-out assault on the visual senses. The station is festooned by the country’s third-largest military contractor. Apparently the usual ad space along tracks proved insufficient, so Northrop Grumman placed ads on all four sides of special ad-space columns installed near the turnstiles, on banners strung up along the railings upstairs, and on the floor just before the escalators. CBS Outdoor, which manages the ad space in D.C. Metro stations, claims on its website that “Capitol Hill Station Domination is an impactful way to get your message in front of the Congress and decision-makers in D.C.”

The most startling of all the Capitol South billboards is the ominous scene of a bombed-out apartment building above this slogan: “By the time you find the threat, we’ve already taken it out of the picture.” (Northrop Grumman fails to detail what happened to the people living in those apartments.)

The defense contractor presence on the D.C. Metro is just one example of the ubiquitous signs of militarism in Washington. Reminding us that we are a nation at war, military personnel dressed in camouflage can be seen everywhere from shopping mall food courts to lines at the bank. Following 9/11, combat fatigues were ordered everyday wear for all service members, including those with desk jobs.

I ask camouflaged service members the reason for wearing combat uniforms and am told it is to support “troops in the field.” One woman tells me, “That’s a good question. You feel kind of funny wearing this.” Looking down at her desert boots, she says, “It’s not exactly office wear.”

Signs calling for support of the troops can be found on everything from restaurant walls to dump trucks. At a gas station on Columbia Pike in Arlington, directly above the gas pumps is a red, white and blue sign that reads “Support Our Troops.” (… “and Keep the Oil Flowing”–is that the implicit message?)

This phenomenon is not limited to the nation’s capital. The militarization of our society has been progressing for decades, permeating our schools, research and development programs and law enforcement agencies. The signs of this martial spirit are so ubiquitous that they have become subliminal, persuading us to accept violence and war as not only a suitable solution to conflict, but the only one

Stephanie Westbrook is an anti-war activist in Rome.