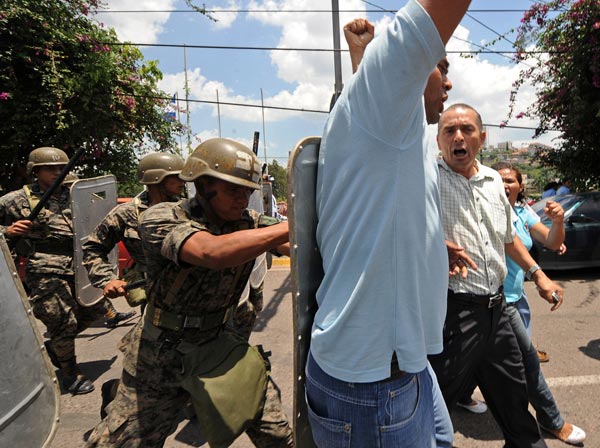 Army soldiers clash with members of the National Autonomous University of Honduras (UNAH) workers union during a protest against the establishment of the Truth Commission, on May 4, 2010, outside the Government House in Tegucigalpa. (Photo by Orlando Sierra/AFP/Getty Images)

One year after the coup, the battle over who gets to expose—or avoid—recent history begins.

"The only purpose of [Lobo's Truth Commission] is to support the Honduran regime's continued efforts to whitewash those responsible for the coup and its violent aftermath."

One year after Latin America’s first coup of the century, two opposing truth commissions–one official, one not–have set to work to determine why and how Honduran President Manuel Zelaya was removed from power. At stake is the legitimacy of the Honduran state and its president, issues of hegemony versus democracy, and, not least, the historical record.

The Honduran Armed Forces staged a coup d’état against Zelaya on June 28, 2009. Upset by Zelaya’s leftward drift, Honduras’ oligarchy, which has long ruled the impoverished Central American nation of 7.3 million, backed the coup.

In response, Zelaya supporters, as well as those simply opposed to the rupture of democratic rule, formed a vocal opposition movement, the National Front of Popular Resistance. The coup government’s reaction, which was immediate and continues to the present, has involved “thousands of human-rights violations,” according to the human-rights organization Center for Justice and International Law. Scores of opposition activists have been assassinated, according to Honduran human-rights organizations.

On January 26, the Honduran Congress granted amnesty to all those involved in political crimes during the coup. The next day, President Porfirio “Pepe” Lobo was inaugurated. Yet with the exception of the United States and allies like Mexico, Canada and Colombia, most of the hemisphere’s nations, including Brazil, Venezuela and Argentina, and the Organization of American States still did not recognize Lobo’s government.

On May 4, Lobo came up with a remedy, launching “La Comisión de Verdad” (known in English as the “Truth Commission”). Although truth commissions are usually conducted in post-conflict situations–like in El Salvador or South Africa in the 1990s–Honduras’ is to take place during ongoing conflict. The commission’s stated aims are to clarify what happened before, during and after the coup that removed Zelaya from power, and to produce recommendations so that last year’s events will never be repeated. Eduardo Stein, a former vice president of Guatemala, was picked by Lobo to lead it.

Lobo’s “Truth Commission” has already yielded diplomatic results: since its incorporation, eight nations have joined the United States in normalizing relations with Honduras.

Along with Stein, the government commission will comprise two academics (the present and former presidents of Honduran National University), a Canadian career diplomat and the ex-head of the Peruvian Supreme Court. Spain, Japan, Sweden, Canada and the United States will fund the commission, rather than the Honduran government.

Bertha Oliva, director of the Honduran Committee of the Detained and Disappeared, is not impressed. “The only purpose of [Lobo’s Truth Commission] is to support the Honduran regime’s continued efforts to whitewash those responsible for the coup and its violent aftermath,” she wrote on Huffington Post.

To counter the official commission, the Honduran opposition movement is establishing its own investigative body. Six human-rights organizations will launch “Comisión de la Verdad” (known in English as “Commission of the Truth”) on June 28, the coup’s anniversary. It will be “responsible for making known the human rights violations committed against thousands of Hondurans,” according to a May 6 commission press release. The commission–which will include a Nobel laureate, a writer and a priest–will last one year.

With the official “Truth Commission” backed by the Honduran oligarchy and the U.S. government, and the oppositionist “Commission of the Truth” backed by the Latin American Left, the two commissions will likely become respective standard-bearers for the Honduran government and the still-vibrant opposition movement–and the continuing continental struggle between haves and have-nots. Truth or no truth, don’t expect an amicable resolution to Honduras’ continuing political crisis any time soon.