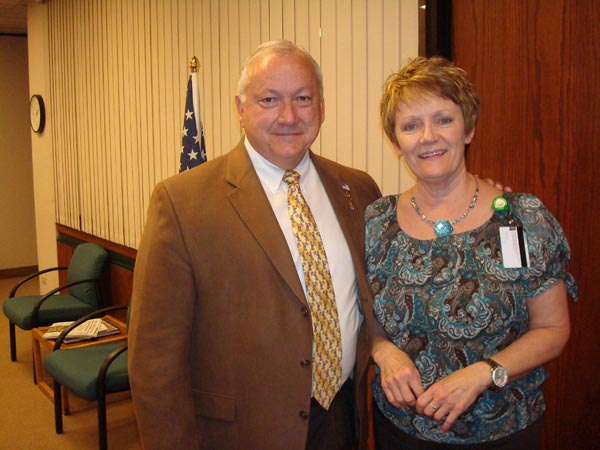 Ties That Bind: Arizona Politicians and the Private Prison Industry

A revolving cast of lobbyists and legislators blur the line between public service and corporate profits.

This story is a sidebar to Corporate Con Game, In These Times' July 2010 cover story.

Over the past several years private-prison companies Corrections Corporation of America (CCA) and the Geo Group, through their work as members of the American Legislative Exchange Council (ALEC) and through their ties to the Arizona Legislature and the office of Gov. Jan Brewer, have had ample opportunity–and obvious intent–to ensure the passage of S.B. 1070.

According to Sen. Russell Pearce and Brewer’s spokesman Paul Senseman, the S.B. 1070 went through a lengthy edit and review process that took place predominantly within the Arizona Legislature and the offices of the Maricopa County Attorney and Gov. Brewer.

A little over a week after Pearce introduced S.B. 1070 on the floor of the Arizona Senate, CCA enlisted Highground Consulting, one of the most influential lobbying firms in Phoenix, to represent its interests in the state. Lobby disclosure forms filed with the Arizona Secretary of State indicate that Maricopa County also employed Highground during the time of the bill’s formation. Highground’s owner and principal, Charles “Chuck” Coughlin, is a top advisor and the current campaign manager of Gov. Brewer.

In other words, in 2005 and 2006, as Arizona legislators–many of them ALEC members–were drafting provisions of what would eventually become the “Breathing While Brown” law, Brewer’s director of communications, Senseman, was lobbying them on behalf of CCA. Brewer’s “chief policy advisor,” Richard Bark–a man Senseman and Pearce both say was directly involved in the drafting of S.B. 1070–remains listed with the Office of the Secretary of State as an active lobbyist for the Arizona Chamber of Commerce and Industry (ACCI). CCA is a “board level” member of the ACCI and is the top employer in Pinal County, located just south of Maricopa County, where it operates five detention facilities for both state prisoners and immigrant detainees.

While Public Policy Partners (PPP), an Arizona-based firm, has more than 30 Arizona clients, it only has two clients at the federal level: Geo Group (based in Florida) and Ron Sachs Communications, a Florida-based public-relations firm that, promotes prison privatization. PPP, as a firm, also appears to be an advocate for expanded use of private prisons. Federal lobbying records show PPP owner, John Kaites, lobbying on behalf of the firm on issues of “private correctional detention management.”

CCA has also shown special interest in Arizona through recent hiring decisions. In 2007, CCA hired on Brad Regens as “Vice President of State Partnership Relations” for the purpose of cultivating new contracts in Arizona and California. In the two years immediately prior to his employment at CCA, Regens had worked in the Arizona House as director of fiscal policy. Before his appointment as director of fiscal policy, Regens had spent nine years working in the state legislature in various roles, including assistant director of the Arizona Joint Legislative Budget Committee.

Following its hiring of Regens, CCA elected former U.S. Sen. Dennis DeConcini (D-Ariz.) to its board of directors.