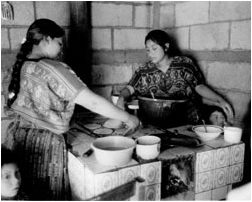 BY Eleanor J. Bader
Share TweetReddit0 EmailPrint
Helen M. Stummer has been called the Dorothea Lange of our time. As a chronicler of contemporary poverty, for decades she has photographed the poor, from New York City to rural Maine to Comalapa, Guatemala.

“There is something about communities that are invisible and ignored that resonates with me,” she says. “I would love to take pictures of pretty things, but when I see someone struggling, living with dignity under harsh conditions, it activates me and I pick up my camera. Injustice—poverty—gets my juices moving; I take photos as a way of dealing with my rage.”

Stummer’s nearly 30-year career began in 1976. A suburban New Jersey single mother, she was going to college and working as a bookkeeper. “I was an artist, a painter,” she says, “and I decided to take a beginning photography class at the International Center for Photography in Manhattan. I felt I needed to learn to take pictures of things I wanted to paint.”

When her teacher noted her seemingly innate ability to photograph children, she suggested that Stummer go to the Children’s Aid Society on the Lower East Side to practice. Stummer took her advice. “I remember standing in the doorway of the Society one day in June 1976 and seeing all this chaos, the children running in and out of tenements and abandoned buildings,” she recalls. “There was tremendous energy.”

Still, Stummer knew that she would need to sharpen her street smarts. “A short time before I got to the Lower East Side, the New York Times ran a piece about the block the Children’s Aid Society was on, East 6th between Avenues C and D. The article called it ‘the meanest street in America.’ I was scared to death walking around,” Stummer admits. “I kept expecting something bad to happen. But I once read that if you don’t take risks, you’ll never do anything meaningful. That was the mantra I kept repeating.”

Not surprisingly, difficulties developed. The first pictures Stummer shot were so blurry, they were unrecognizable. “My hands would literally shake from fear,” she says. Eventually, Stummer learned to increase the shutter speed on her camera, which fixed the problem. She also got to know the residents of the community.

“I made friends,” she says. “I’d show up once a week, week after week. I’d see children playing, and I’d photograph them. The next week I’d return with copies of the pictures. At first, the mothers’ reaction was flat, as if they did not want them. I couldn’t understand it until someone said, ‘no dinero.’ I was then able to explain that I didn’t want money. I wanted them to have the prints. That was when my work started to be well-received.”

Stummer photographed the Lower East Side until 1980, when a wrong turn landed her in the middle of Newark, New Jersey, a city whose squalor rivaled Lower Manhattan’s. Although Stummer had been born in Newark in 1936, she had not been there in decades, and the poverty she saw stunned her. She began to wander around, meeting people from a neighborhood coalition working to better the community.

One particular edifice—the Irvine Turner Building—grabbed her attention. “I don’t know what it was but there was something electric about the place,” says Stummer. “I photographed it for 15 years, until it was demolished in 1998 following a fire. Some of the residents were there the whole time, and I photographed their children growing up and then having their own children. I’m still in touch with some of them.”

Although Stummer took thousands of pictures of the Turner building—the results became No Easy Walk: Newark 1980-1993, a photo essay published by Temple University Press in 1994—as her relationship with the residents developed, she felt compelled to move beyond documentation into advocacy.

“I’d go inside the apartments and see wires hanging or a ceiling coming down,” she recalls. “I’d take photos and show them to the Violations Bureau. The residents had been complaining about these conditions for months or years, but nothing had changed. Then I come in—a white outsider—and I scream that these conditions are an abomination and the building gets fixed. That changed me, seeing how powerless the poor are. Sure, the residents received a lot of help because of me, but it continues to be a reciprocal relationship. People open up their homes and tell me their stories. I then educate others about conditions in the ghetto. I try to bring reality into the mix, to challenge the idea that people get what they deserve. I help people see that everyone wants the same things: to be warm, housed, fed, clothed and educated. I show audiences the injustice of having nothing.”

Although Stummer has a long-term commitment to Newark, her work has taken her beyond the Garden State. A 1984 marriage—her third—brought her to Brooklin, Maine, where her spouse had a cabin. “We no longer have the house, but in those years I’d go up there, to paradise, and be bored. So I started looking around and discovered HOME, a group affiliated with the Christian Emmaus movement: Homeworkers Organized for More Employment. They build low-income housing, run literacy classes, sponsor a food bank, and run emergency shelters and a childcare center. I took photographs that they used on a calendar and helped with fundraising.”

In the ’90s, HOME began to assist Guatemalan refugees living in the United States. They also established a program to build schools, homes and health centers in the Guatemalan town of Comalapa. Stummer went to Comalapa in 1997 and took photos of the people she worked alongside. “I’ve always been an underdog, so no matter where I go I try to photograph people respectfully,” Stummer says.

Indeed, she credits the hardships she has faced—being raised by a vindictive, alcoholic grandmother; getting pregnant in 1952, when she was 16, and putting the baby up for adoption; and entering into one forced and one loveless marriage—for sensitizing her to the struggles of others.

“My work is part of a long tradition,” she says. “Like Lewis Hine, Ansel Adams, Dorothea Lange and Jacob Riis, I photograph injustice. I try to force people to see a world they close their eyes to.”

For her efforts Stummer has received both accolades and sibilations. A 1986 exhibit to celebrate Newark’s history was pulled because the photos were deemed “too hard to look at,” and audiences have repeatedly questioned her subject matter. Nonetheless, Stummer’s work is in the permanent collections of museums across the country, and she has been widely exhibited. The Library of Congress acquired 24 Stummer photos in 2002.

She has also won numerous awards, most recently a 2003 New Jersey State Council on the Arts Fellowship. Although Stummer retired from teaching workshops in 2000, she continues to photograph Newark and speak out against inequality. “I have a persistent personality,” she quips. “I just keep going back. Even when I feel impotent or when the line between city and suburb seems huge, I know I need to continue to acknowledge reality and present what I see.”