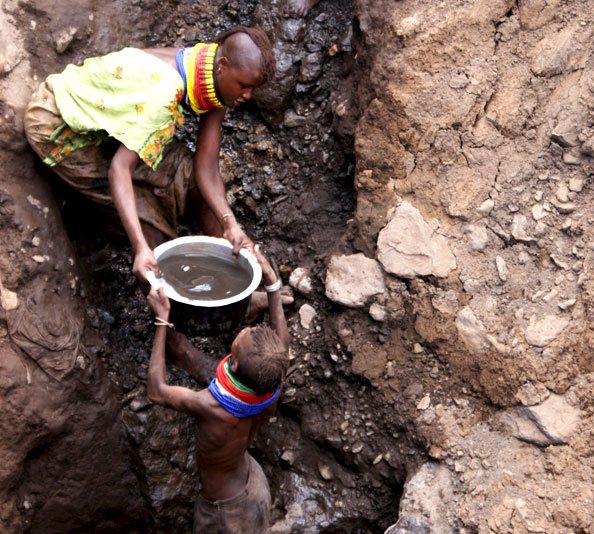 In the first skirmishes due to global warming, nomads fight for survival.

Turkana, North Kenya–Exhausted by the 110-degree temperature, Loochi Kidewa walks beside his cattle and goats with the rest of his tribe toward an underground spring.

Nervous, they approach the water guardedly. Loochi abruptly swings the AK-47 strapped across his shoulders and fires randomly into the distant hills, only to be reprimanded by a man walking by him for wasting ammunition. Loochi has walked eight miles in search of water and anticipates that rival tribes from across the border will be vying for the same water. The only water he finds is from an underground spring, which is contaminated by surface soil and feces from the livestock that his tribe, the Turkana, have herded from long distances.

Loochi is 13 years old and partially blind. Clothed only in a tattered shirt and fatigued by the long walk, he leans on his Kalashnikov, still looking anxiously at the hills, while the rest of his tribe descends into the spring to get water for the livestock to drink.

The water wars in Kenya are some of the world’s first skirmishes due to climate change. In the Turkana district of northern Kenya, a 50,000-square-mile district inhabited by about 500,000 nomads, temperatures have risen drastically during the last 10 years, and rains have persistently failed to come.

For hundreds of years, the Turkana have herded cattle, sheep and goats. They are among the most nomadic people in the world, constantly moving in search of pasture for their livestock. But the changing climate and marginalization by successive governments have caused resources to dwindle at a startling rate across the Turkana’s traditional home.

“It was easier before,” says Loochi’s father Akadaye as he holds a protective palm over Loochi’s damaged eye. “We used to have dry periods, but the rains did eventually come. But now it just goes on and on.” Droughts that once appeared every decade have started ravaging the land every two or three years, throwing the tribe’s migratory patterns into disarray.

All this is undoubtedly due to climate change. Mount Kenya and Kilimanjaro have seen their ice caps recede during the last 60 years and Lake Chad, which extends over Chad, Niger, Cameroon and Nigeria has lost 80 percent of its water since 1980.

But a sanguine Loochi, having lived only in drought in his young life, sweeps his gun over the distant mountains and says the problem–and the solution–lies across the border, in Uganda. “They have all the green land, the water and the cattle,” he says. “We will go there tonight.”

Too little water, too many guns

Cattle rustling and tribal rivalry has a long history in East Africa and to some extent is an intrinsic aspect of traditional pastoralist culture. An inveterate rivalry has long existed between the Pokot, Samburu and Turkana tribes of Kenya, often resulting in armed battles. But as tribal warfare rages over increasingly scarce water and grazing land, skirmishes over cattle are becoming more destructive and spreading across national borders.

“Earlier you would possibly find a handful of tribe members quarrelling over a water source, making a lot of noise and threatening each other with spears,” says the head of Nasinuono village, who goes by the name “Chief” and also works as a coordinator for the African Medical and Research Foundation (AMREF). “But now”–Chief pauses, his eyes widen and he brandishes an imaginary gun–“bloodshed. There is no water, just blood.”

An ongoing survey initiated by the Kenyan government estimates that almost 95 percent of adakars (small, nomadic villages) have access to guns; that amounts to nearly 50,000 weapons in the hands of civilians. Most of these weapons are thought to have permeated the porous borders of Somalia and formerly war-torn Sudan. They are cheap, robust, need minimum maintenance and appear to require little training to use.

Akadaye says he got his son a Kalashnikov for two bulls and a few goats. “Training? No, no, just shoot at the Toposa.” The Toposa are the Turkana’s feared and ruthless rivals from Sudan. “But he was not very good,” Akadaye says, pointing to Loochi’s eyes. “Not fast enough.” Last year, 40 Toposa wielding sophisticated guns raided Akadaye’s grazing grounds and stole 200 cattle, killing three Turkana on their way out. Akadaye and other members of his adakar regrouped and pursued the raiders. When the Toposa realized they were outnumbered, they shot and slaughtered all the cattle. “They just wanted to make us poor,” Akadaye says.

The United Nations estimates that 400 people have died in Kenya as a result of cattle rustling and water skirmishes in the past year. The Kenyan government has made several attempts to disarm the tribes, but is often accused of being heavy-handed and short-sighted.

Eliminon Peunon is part of an adakar where all weapons have been confiscated. “I had nineteen children,” he says, pointing to his three wives. “We need the government to build water facilities and give us protection. What is the point in just taking away our guns? I have lost five children to the Toposa and another seven dead because of the drought.” The last effort made by the government’s internal security department to disarm the tribes left several dead and hundreds displaced.

‘The world needs to wake up’

Eberhard Zeyle, a parasitologist for AMREF who has worked tirelessly to reduce conflict, says bordering countries must work in concert toward pacification and disarmament. “Taking away weapons from a tribe is leaving them vulnerable to armed rivals across the border,” Zeyle says.

A 2009 Human Rights Watch report titled “Bring the Gun or You’ll Die” urged the Kenyan government to conduct future disarmament operations, in line with the provisions of the National Policy on Small Arms and Light Weapons, which calls for an evaluation of the underlying economic, environmental, social, cultural and political causes of gun prevalence. While the Kenyan government’s policing of the border has been desultory and wanting, Uganda is accused of using excessive force. In the summer of 2009, with the drought at its peak, the Ugandan military allegedly deployed attack helicopters against Kenyan herdsmen attempting to graze livestock in Uganda.

A meeting organized last year by AMREF in the Kakuma district of northern Kenya, attended by nongovernmental organizations, charities and Kenya’s departments of health and water, examined the crisis in Turkana. The Oropoi Peace Initiative Development Organisation (OPIDO), a youth group based in the district of Oropoi, called for Kenya, Sudan and Uganda to work together toward small arms control. OPIDO encourages friendship among the tribes through soccer games, the peaceful allocation of accessible resources and giving up weapons.

“I’d rather kill all my children and shoot myself than give my guns to the government,” Akadaye says in response to the government’s recent drive to disarm. “They will not give us any protection and we will eventually get slaughtered by the Toposa.”

Despite climate change, Zeyle thinks there are adequate resources in Turkana and other parts of northern Kenya–they just need to be better harnessed and protected. “The Turkana have been through tremendous hardship in the past,” he says. “They have been ignored repeatedly since colonial times by various governments. But now they need help. The world needs to wake up to the fact that actions taken in other parts of the world are affecting the livelihood of the Turkana.”

Meanwhile, the threat of a raid at the water spring has become real. A large number of desperate and thirsty Toposa are seen coming down the hill. A great commotion goes up as Akadaye, Loochi and the rest of the tribe rush to herd their cattle away from the water.