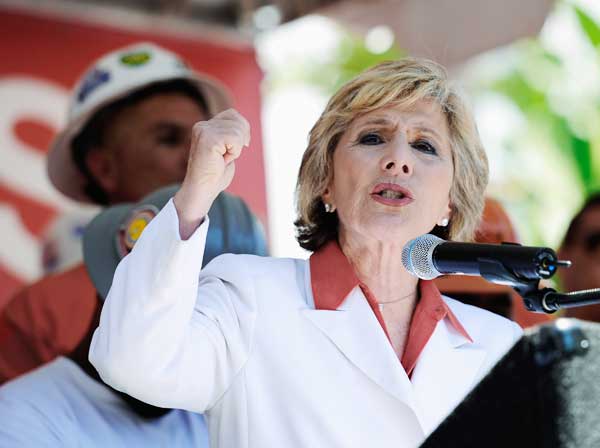 Has Barbara Boxer Met Her Match?

“I’m sorry some progressives don’t think she’s perfect. All I can say is, we’re getting 80 to 90 percent of the liberal vote in California and we’re going to work hard to get that last percent.”

Every six years since her year-of-the-woman election to the Senate in 1992, Barbara Boxer fends off a flurry of right-wing attacks, a well-heeled Republican challenger, and increasingly, rumblings of dissatisfaction from progressive Democrats who feel she’s strayed from liberal roots. Each time, the polls tighten, and rumors of her political demise mount–and each time, the rumors prove premature.

Now she’s locked in what may be her tightest race yet with Carly Fiorina, the deposed CEO of Hewlett-Packard, multibillionaire (proud owner of two yachts), and a top lieutenant in John McCain’s failed 2008 bid for the White House. Despite being sacked by HP’s board of directors in 2005 and broadly criticized for her tenure there, Fiorina’s dollars and dynamism–along with lukewarm voters’ support for Boxer–have led to a close race.

As the campaign enters its final stretch, Boxer and Fiorina weekly exchange negligible 1 percent leads; over the summer, Fiorina steadily gained ground to create a dead heat. Now, the fate of Democrats’ bare Senate majority rests in Californians’ hands. Likewise, a Fiorina win would imperil liberals’ voice in the august body, and the capacity of progressives to move Democrats to the left on key issues from Israel-Palestine peace, to banking and other economic reform, to immigration overhaul.

Even as progressives bemoan Boxer, they fear a Fiorina victory. “Carly,” as her campaign likes to call her, is ardently anti-choice, supports Arizona’s crackdown on immigrants and opposes gay marriage.

Yet Boxer’s toughest opponent may not be Fiorina. This November, Boxer must navigate some treacherous shoals: an anti-incumbent wildfire is blazing across California’s economically parched inlands. The Golden State’s chronic fiscal mess is spiraling into wider voter alienation.

Boxer also suffers from a nationwide “enthusiasm gap” among Democrats, says writer Robert Cruickshank, Public Policy Director of the Courage Campaign. “Voters, especially the so-called ‘Obama surge’ voters from 2008, have seen the U.S. Senate in particular fail to implement an agenda of change,” and are turned off. “All Senate Democrats are suffering as a result of the obstructionism employed by Democrats such as Ben Nelson, Blanche Lincoln and Joe Lieberman,” says Cruickshank, and some California Democrats “are indicating they won’t vote in November.”

Among the disillusioned is Aimee Allison, producer of a popular news show on Berkeley’s KPFA public radio station and a former candidate for Oakland City Council. “The secret to Boxer’s flailing re-election campaign is not in who will vote, but who will not,” she says, noting that Boxer’s campaign has failed to reach many Latinos. “Boxer’s campaign assumes they’ll get two-thirds of the Latino vote–twenty percent of the Californian electorate–but they won’t without an all-out effort to reach Latino voters. She’s got an edge, but unless she excites and inspires people to go to the polls, her campaign is DOA.”

Indeed, Boxer’s website shows just three endorsements from “ethnic leaders”: United Farm Workers of America, the Mexican American Bar Association, and the San Diego Chicano Democratic Association.  And while her site lists dozens of endorsers across the agriculture and technology industries, just three environmental groups are on board– California League of Conservation Voters, the National League of Conservation Voters and the Sierra Club.

Boxer has been here before–a tight race, with multiple vulnerabilities of being positioned on the Senate’s far liberal wing, a lightning rod for conservatives, yet a disappointment for many progressives. “In past years there have been a lot of concerns and worries about her losing to some right-wing Republican,” says author and Democratic Party activist Norman Solomon. “It’s not new that she’s vulnerable.”

But this time, Boxer’s six-year cycle “is falling at a time when Republicans are poised to make gains,” says Solomon, who holds an elected seat on the California Democratic Party’s Central Committee. ”Someone in Boxer’s position stands to suffer from demoralization and demobilization of the base.” While Solomon insists progressives should help Boxer fend off Fiorina’s right-wing challenge, he adds that Boxer has remained far too attached to President Obama’s agenda,”and does not convey a tremendous amount of independence.”

Fiorina, who has amassed a personal net worth of $2.2 billion, was dumped by HP’s board of directors in February 2005 following increasingly public complaints about her leadership style and reports of HP executives spying on board members to determine the source of news leaks.

“I know a little bit about Carly Fiorina, having watched her almost destroy the company my grandfather founded,” writes Arianna Packard, granddaughter of company founder Dave Packard, in a letter to several U.S. senators. “She fired 28,000 people before she herself was fired, departing with the 21-million-dollar golden parachute that is financing her campaign.”

How is it that a deposed CEO, running on her record as a business executive, stands a strong chance of being California’s next U.S. Senator?

Looming in the backdrop–or perhaps the forefront–is the Golden State’s economy, which is sinking faster than a sunset. Unemployment runs at a near-Michigan-like 12.3 percent, and middle-class families are being hammered by the “double whammy” of job struggles and the mortgage crisis, says Jean Ross, executive director of the nonprofit, nonpartisan California Budget Project.

“The economy is the overarching concern of voters this year,” says Ross. And it’s not clear who suffers more, incumbents blamed for economic failures or corporate CEO’s like Fiorina and gubernatorial hopeful and billionaire Meg Whitman of E-bay fame. ”For good reason, there’s a lot of confusion about whom to blame,” Ross adds.

Unlike recessions in recent decades, which were regional in nature, today’s spans the entire state, with “a lot of families being turned upside down,” Ross says. “These are deeply troubling times–and all the forecasts say we’re in for a long slow recovery.”

Boxer’s campaign manager, Rose Kapolczynski, says this year, even more than in 1992–when “it’s the economy, stupid” was the Democrats’ rallying cry–Democratic incumbents are caught in the slumbering economy’s crosshairs. ”People are frustrated and angry at the pace of economic recovery, and I understand,” says Kapolczynski, who has worked for Boxer since 1991.  “The recovery is still slower than anyone wants, and that frustration is leading them to say, ‘No, I’m not inclined to re-elect Barbara Boxer, or any other congressional incumbent.’ “

Boxer’s progressive critics may carry little numerical weight at the ballot box, but their frustrations could play a role in voter turnout in a close race.

“She’s seen as part of the Democratic Party establishment, and when that establishment includes the war on terror, you have problems,” Solomon says.

Kapolczynski insists the senator “stands up for what she believes–she’s not putting a finger in the wind and saying what do conservatives think, or what do liberals think. I’m sorry some progressives don’t think she’s perfect.”

“All I can say is, we’re getting eighty to ninety percent of the liberal vote in California, and we’re going to work hard to get that last percent–but in this election there is a clear choice. I hope that progressives would look at what Carly Fiorina in the Senate would mean.”

Indeed, given the very real threat of a Fiorina victory, Solomon says progressives needed to pressure Boxer earlier–but now need to support her re-election efforts. “Primaries exist for a reason.…There was no challenge to Boxer in the primaries.… For progressives to say Boxer is lacking, or even a bit repugnant on some issues, it’s a bit late in the game.”