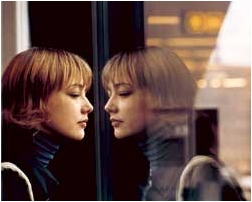 Oksana Akinshina in Lilya 4-ever.

Kiss the Girls, Make Them Cry

BY Joshua Rothkopf
Share TweetReddit0 EmailPrint
You don’t have to be an embedded journalist to know we’re missing much of the good stuff on live television. I’m referring of course to the passionate liplock between Lena Katina and Julia Volkova, two Russian teens better known to the pop world as million-sellers t.A.T.u., whose dalliance on The Tonight Show was met with frantic camera swiveling and a cutaway to a rather boring guitar player. (He still might have been preferable to what England’s Top of the Pops subbed in: a straight couple snogging in the audience.)

The Kiss is definitely part of the act; it may be the whole act itself. As much a prefabrication as The Monkees or Menudo, t.A.T.u. (which stands for “this girl loves that girl” in Russian slang) were handpicked from hundreds of schoolgirls by one savvy entrepreneur, Ivan Shapovalov, clearly up on his Nabokov as much as his Jerry Springer. Even their recorded songs, huge hits around the world, feature suspiciously extended synth solos that would make former members of Yes jealous, leaving plenty of room for who-knows-what.

Take your pick: pornification of the mainstream, exploitation of minors (the girls only recently turned 18), flagrant abuse of plaid miniskirts—t.A.T.u. have already served their purpose. Not by donning “Fuck War” T-shirts, a message which probably registered to most Americans unfamiliar with Cyrillic as a creative misspelling of “xylophone,” but by revealing how deathly afraid broadcasters are of Queer Planet, even one as stubble-free and (as the rumor goes) phony as t.A.T.u.’s femme-on-femme variety is. Only weeks later, one could watch Oscar-winner Adrien Brody soul-kissing Halle Berry—a gesture as inflammatory to certain red-staters as Michael Moore’s tirade—while t.A.T.u found themselves stalled on the charts, their sales pitch censored.

Coming as a footnote to all this, maybe unfairly, is the music: darkly dramatic and pretty much irresistible. To my ears, all teen pop has an air of well-scrubbed desperation about it, from the Jackson Five down to Britney Spears. In the case of t.A.T.u., always fleeing lyrically from a harsh world that doesn’t approve (“Nothing can stop this/not now I love you/They’re not going to get us!”), the fear and flight actually make sense. Their producer, Trevor Horn, is the sonic genius behind Frankie Goes to Hollywood’s thundering “Relax,” and he brings the same doomy sex thump to these grooves, a lesbian response come 20 years later. (They also do a high-pitched cover of the Smiths’ “How Soon Is Now?” which actually outdoes the original for sheer hormonal meltdown.) You wonder how many compromises Lena and Julia have had to make to escape into this fantasy, and you pray they’re not pretending.

What does any of this have to do with Lukas Moodysson’s fierce call-to-conscience Lilya 4-ever, only his third feature into what already seems a politically committed career? Quite a lot; his main character, Lilya (the angel-faced Oksana Akinshina), is one of those Russian teens not yet on the pop charts but prone to mentioning she was born on the same day (if not year) of Princess Britney herself. (Lena and Julia also gaze out from a poster pinned to her bedroom wall; later, their wails are heard on a car radio, the soundtrack to a sleet-filled skyline of hopeless tenement rows.) Lilya dreams of America, of an escape to anywhere. Her despair is what ultimately most resembles t.A.T.u.; in a way it redeems their manufactured defiance. Moodysson’s film is about what happens when that dream of escape goes horribly wrong.

Lukas Moodysson, a Swede, has crystallized into the world’s preeminent director of youth in crisis. His debut feature, Show Me Love (the inspiration for t.A.T.u.’s best song, similarly titled), is about the sexual attraction between two teen-aged girls caught in the flush of adolescent rage. Together was an oasis of humanity released in September 2001; its gentle ’70s hippie community besieged by its own ideals might have offered shell-shocked viewers more comfort than they could immediately feel. Both are sweet, honest films—well worth seeking out if only to recognize the unsparing imagist Moodysson has become: Lilya, physically beaten and glassy-eyed, standing on a bridge overlooking the buzzing freeway.

From these indelible first moments, underscored by a heavy metal crush courtesy the German band Rammstein, Moodysson pulls back to three months earlier and a grim picture of life in the decrepit suburbs of an unnamed post-Soviet city (filmed in Tallinn, Estonia). After gloating to friends about her mother’s American boyfriend and his plan to bring them to the States, Lilya is stunned to her knees to be left behind by the adults who don’t want her along, their tires screeching. Moodysson slows down the action and drops the sound, resulting in a potent, almost iconic image of abandonment; parents are rarely any help in his teen-centric universe. Suffering the first of several blows to come, Lilya is forced by an aunt of surprising cruelty (it must run in the family) to move into a cheaper apartment—a disgusting pit of grime and soiled sheets only made vacant by the death of the former tenant.

As difficult as these early scenes are to watch, they do establish a strangely reassuring toughness in Lilya and her friends, who pursue the same stupid kicks that kids do around the world: sniffing the glue provided by a lonely younger boy, Volodya (Artiom Bogucharskij), and chasing each other around the crumbling pylons of abandoned Soviet military factories. These children of the revolution fail to recognize Brezhnev’s name but envy the five-year plan of world dominator Michael Jordan and those wearing his swoosh, an irony that’s perhaps a touch too bald but not unmerited.

More subtly effective are the recession-proof dance clubs, free to young women and hotbeds for transactional sex. Lilya is drawn against her will to this demeaning setting—first by a damaging association with a girlfriend, then by necessity—and Moodysson pulls off one of his signature zooms right up to Akinshina’s face, frozen in a mask of resignation as she rides the train to her first night’s work. It’s a turning point, a grave mistake captured in quiet focus, and Moodysson’s young actress doesn’t flinch.

Nor does the script flinch from where it must go, though hope does arrive briefly with a handsome young clubgoer, Andrei (Pavel Ponomarev), sweeping Lilya off her feet on chaste dates involving giggly bumper-car rides and romantic meals at McDonald’s. Volodya, the boy, is suspicious of him, but a flight to Sweden is somehow booked; once again, tires screech off leaving someone behind. You could reasonably think for a second Lilya has finally made it, carefully unwrapping her airline tray with palpable excitement. The third act begins with a door locking behind her.

Can a film so expressly dedicated to the young girls sold into the sex trade be fairly dismissed as miserablism? Only by those unaware of the real problems in their own first-world cities and neighborhoods; Moodysson was inspired by an appalling event he’d heard of in his hometown of Malmö, where the story concludes. He sets up dark echoes: another dingy apartment to tidy up (perhaps also vacated by the dead); a devastating shot of Lilya tearing into McDonald’s in the backseat of her brutal pimp’s car, his reward to her for services rendered, the dates with Andrei fading away.

Volodya visits Lilya in her fantasies, like an angel in the framed picture she unpacks from place to place. But God is absent from Lilya 4-ever, ending with an epiphany as expressive as any in Moodysson’s work but never this damning. The finality is an overwhelming call to action on behalf of others; I really hope t.A.T.u. can make it down to the theaters.