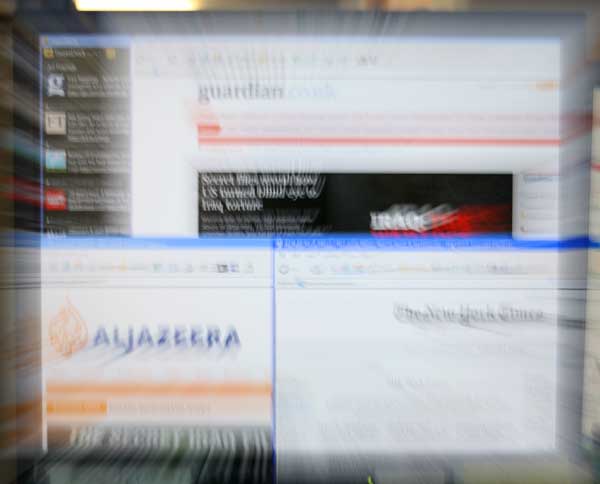 A computer screen displays the websites of various media outlets reporting on the Iraq War Logs on October 22.

'There is much less of a focus on the aspects of the leaks that make the U.S. look bad,' says Jim Naureckas of Fairness and Accuracy in Reporting.

When five news organizations–The New York Times, The Guardian, Le Monde, Der Spiegel and Al Jazeera–were granted access to Wikileaks’ Iraq War Logs before they were published online on October 22, only The Times avoided drawing the same conclusions as its colleagues abroad. The Guardian’s coverage featured headlines such as “Secret Files Show How U.S. Ignored Torture” and “How Friendly Fire Became Routine,” while Le Monde was no less dramatic. Der Spiegel, the German news weekly, published a lengthy editorial titled, “Dumb War: Taking Stock of the Iraq Invasion,” which concluded that the Wikileaks documents confirm that the war was a failure.

“It’s an interesting case study in how the U.S. media treats stories compared to their international colleagues,” says Jim Naureckas of New York-based Fairness and Accuracy in Reporting. Referring to The Times’ front-page stories on Iran’s involvement in Iraq and sexual assault allegations regarding Wikileaks’ founder, Julian Assange, Naureckas says “there is much less of a focus on the aspects of the leaks that make the U.S. look bad and there is an effort to seek out things in the material that support the official agenda.”

U.S. media coverage of the Iraq War Logs triggered plenty of criticism online, where Salon.com’s Glenn Greenwald condemned the Times for its “Pentagon subservient” coverage of the leaks–a criticism seconded by Joel Meares on The Columbia Journalism Review’s blog The Kicker.

The criticism that the press gives too much influence to the military is particularly pertinent to the War Logs, says Naureckas. “One thing that has really characterized the Iraq War and the Afghan War is that the military is seen as the real source of information and analysis,” he says. “You get a more honest appraisal of how the U.S. military views the war, but that’s not a full picture of the war.” After all, he says, the military “is not in the business of reporting the news. The military is in the business of winning wars.”

What happens when the military does report news? The last decade has seen the public discourse about war increasingly shaded by bureaucratic doublespeak like “enhanced interrogation techniques.”

Geoffrey Nunberg, a linguist at the University of California at Berkeley, says, “On the one hand, it keeps at a distance ‘the facts on the ground’ and on the other, it’s just a way of suggesting that all of these matters which may be horrifying to the average person are all just the subject of organizational procedure.” In an era when military secrets cannot be taken for granted, Nunberg says that the words journalists, soldiers and generals use not only distance us from war, but obscure its moral consequences.

“Populist intelligence,” as Assange has termed what his organization is dedicated to providing, is a direct challenge to the media-savvy habits of modern warfare.

Andrew Oxford, a native of San Antonio, Texas, was a fall 2010 In These Times editorial intern.