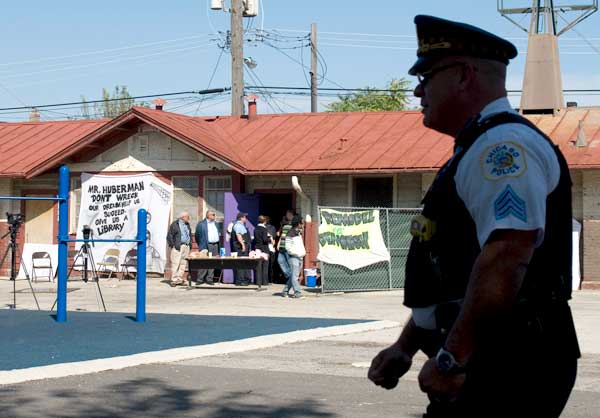 In the shadow of the law: Community members occupy the field house in Chicago.

A group of Hispanic parents save a Chicago community center from destruction.

After Chicago Public School (CPS) officials made plans to tear down a field house at Whittier Elementary School in the city’s Pilsen neighborhood, parents from the Mexican-American community didn’t take it lying down. Instead, they decided to take a seat.

As police surrounded the field house September 15 dozens of parents–mostly mothers–began occupying the building, dubbed “La Casita” by parents and community members. Police officers threatened arrest, but left after more than 100 community members pushed past barricades in support of the activists.

In recent years the field house has served as a Pilsen community center, hosting everything from GED courses to ESL lessons to sewing classes. Parents wanted to save it and create a library for Whittier, an overcrowded school that has none. Parents objected to the demolition plan at multiple meetings with school officials before September, to no avail.

“Parents have been fighting for more than seven years for an expansion,” says Evelin Santos, a community activist who participated in the sit-in. “When we found out they were going to demolish this community center, we were like, ‘you’re going take more space from us after we advocated for more? You’re taking the little that we have and giving us nothing.’ “

The parents had lobbied CPS officials to build a library at the field house, where they believe it would better serve the school and the community. (Throughout the sit-in, the field house served as an ad hoc library as protesters received donations of books and shelves from individuals and organizations across the country.) But CPS said the building was structurally unsafe and converting it into a library would be too costly. “It would need to be torn down and rebuilt from the ground up,” CPS spokeswoman Monique Bond says.

Frustrated with a lack of progress, the parents decided to act. Volunteers maintained a 24-hour presence at the school, trading shifts at the field house to ensure it was continually occupied.

The sit-in echoed direct action taken by concerned parents in the area nearly 10 years ago. In 2001, parents in Little Village, another predominately Mexican-American neighborhood adjacent to Pilsen, staged a hunger strike to force construction of a high school promised three years earlier. After 18 days without food, parents visited the state capital in Springfield to lobby for funding. The next day, the state allocated additional funding for the school, which finally opened four years later.

The sit-in in Pilsen is the latest in a series of successful direct actions in Chicago led by Latino organizers. In September 2008, workers occupied the Republic Windows and Doors factory to protest violations of labor law.

On October 19, 36 days after the sit-in began, parents were granted a meeting with CPS CEO Ron Huberman. He proposed a compromise: the field house would not be razed, and CPS would instead use $356,000 allocated for demolition to renovate the structure. School officials also promised to build a library inside the school and lease out the field house to the Whittier Parents Committee for a nominal $1 annual fee.

On October 28, parents had the deal in writing, and they called off the sit-in. But even as they claimed victory, parents said their struggle was not over. They continue to push for converting the field house into a library, arguing there is not enough room for one inside that school. “The fight continues so that we can ensure that we have a quality education for all children!” the Whittier Parents Committee declared on October 28.

For many parents in the community, the sit-in offered a chance to educate future generations. “I’m teaching [my kids that] they need to stand up for their rights,” says parent Araceli Gonzalez. ”If they see other people that are trying to get something good for them, go ahead and help.”

But it was also a learning opportunity for Gonzalez. ”I’m forty-six-years-old and I’ve never done this in my life,” she says.  ”It’s never too late to start.”

Andy Donakowski is an In These Times intern from St. Paul, Minn.