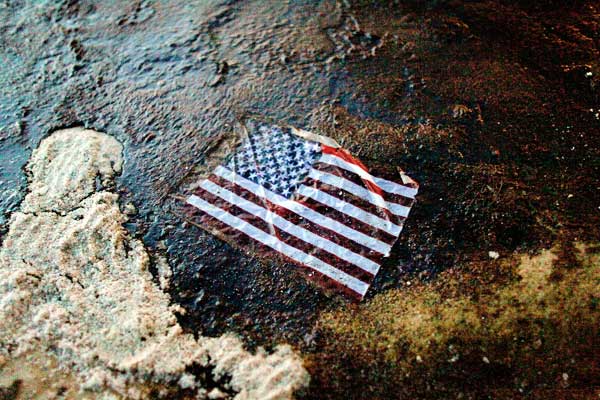 An American flag lays in a slick of oil that washed ashore in the Deepwater Horizon oil spill in the Gulf of Mexico on July 4, in Gulf Shores, Ala.

How the environmental movement missed the moment on climate change.

The insider approach, charged some critics, also led advocates to take too much of their lead from the White House, particularly around messaging.

When BP’s Deepwater Horizon rig exploded on April 20, killing 11 workers, the ensuing environmental crisis could have been a transformative moment for our nation’s energy policy. It was not.

In the midst of widespread public outrage against the oil industry, years of effort by environmental organizations culminated in the Senate’s failure to vote on a bill to combat climate change and spark a transition to renewable energy. Nor did the Senate approve needed reforms to the Oil Pollution Act that would eliminate the liability cap on oil companies.

The lack of results revealed tensions within the movement–differences revealed in climate change legislation that many environmentalists were glad to see die.

In 2006, Fred Krupp, head of the Environmental Defense Fund, forged a coalition with business leaders to break the logjam on climate change legislation. The U.S. Climate Action Partnership included Jim Rogers, CEO of Duke Energy, one of the nation’s largest electric utilities, as well as BP, General Electric and DuPont. The Natural Resources Defense Council (NRDC) and the Nature Conservancy also joined the coalition but industry’s influence was such that, as Eric Pooley reported in Bloomberg Businessweek, at one point Rogers was “basically negotiating with himself.”

Then in 2008, a newly elected Barack Obama declared that “delay is no longer an option” on climate change, making energy legislation one of his top domestic priorities. With a Democratic-controlled Congress, environmentalists saw a “golden opportunity,” said one funder, and poured resources into Washington, D.C. to pass a climate change bill.

The resulting legislation reflected this insider approach. The House narrowly approved the Waxman-Markey bill in June 2009, while a Senate version didn’t emerge until May of this year. When it did, it was loaded with giveaways, including subsidies for nuclear power and expanded offshore drilling.

To the ire of many environmentalists, the Senate bill eliminated the Environmental Protection Agency’s authority under the Clean Air Act to regulate greenhouse gases. This was, in effect, says Kyle Ash, a Greenpeace lobbyist, “giving away existing tools that work in exchange for policies we don’t know work.” The biggest handout of all, though, came in the form of pollution credits that Obama had proposed auctioning off but that the Senate bill would have provided to industry free of charge.

Krupp had assured Sen. Lindsey Graham (R-S.C.) in October 2009 that environmentalists would be flexible on most other energy issues as long as the Senate legislation maintained the House emission reduction targets, according to Ryan Lizza, writing in The New Yorker. It was a spirit of generosity toward industry reflected by Sen. John Kerry (D-Mass.), one of the bill’s chief sponsors, who announced in June, “We believe we have compromised significantly, and we’re prepared to compromise further.”

However, some in the movement took sharp aim at industry’s heavy hand in crafting the legislation.

Moreover, activists charged that neither the House nor Senate bills would prevent climate catastrophe. “It wasn’t in line with what science is telling us we have to do,” says May Boeve of 350.org, a grassroots organization founded by author Bill McKibben. Climate Reality Check, a coalition including Greenpeace, Public Citizen, and Friends of the Earth, faulted the legislation for falling “very short” of what is necessary to reduce greenhouse gasses to safe levels.

The legislation was the product of a strategy “to get the bill across the finish line by putting something in that takes care of every part of the opposition,” says Betsy Taylor, co-founder of 1Sky, a climate change advocacy group.

The insider approach, charged some critics, also led advocates to take too much of their lead from the White House, particularly around messaging. At an April 2009 meeting, Carol Browner, Obama’s energy czar, told environmentalists not to publicly discuss climate change but to focus on green jobs and energy independence. An Obama campaign operative, Paul Tewes, was brought in to run Clean Energy Works, a coalition created to coordinate advocacy around the bill, adopting the slogan “More Jobs. Less Pollution. Greater Security.”

The result was an “enthusiasm gap” among environmental activists. “It wasn’t the kind of policy that would motivate the base of the climate change movement to really fight for it,” says Boeve.

On March 31, Obama announced plans to expand offshore drilling, part of a grand bargain to get the bill through the Senate, according to Antonia Juhasz, author of The Tyranny of Oil and director of Global Exchange’s energy program.

Disaster in the Gulf and the Beltway

Environmental organizations quickly mobilized. Greenpeace and NRDC sent staff to the Gulf to conduct independent assessments and provide media commentary. The Sierra Club organized rallies at dozens of BP stations across the country, while more than 180,000 members emailed Obama, urging his leadership in reducing the nation’s reliance on oil–their largest-ever response to a call to action.

In the midst of the nation’s largest oil spill, environmentalists had a weak climate change bill that promoted oil drilling. At the same time, polls showed that the public didn’t understand the bill’s “cap-and-trade” system for reducing emissions–a system that was “too complex to explain,” as Brent Blackwelder, former president of Friends of the Earth, put it.

“The public anger was there, the frustration was there” to achieve a sweeping change in energy policy, claims John Hocevar of Greenpeace, but what the environmental movement didn’t do “was adequately give people constructive outlets for their anger and outrage.”

In the wake of the disaster, energy was the top issue among Democracy for America members, political director Charles Chamberlain told The Hill, a Washington newsletter. “But we polled our members about whether we should be fighting for the bill and it wasn’t even close. The answer was no.”

Consequently, Boeve says, “Environmental groups weren’t ready to vilify the oil companies and the senators who love them.”

“They made a deal with the devil, and the devil walked away from the table,” Juhasz says. Lacking sufficient votes, Majority Leader Harry Reid (D-Nev.) announced on July 22 that the Senate wouldn’t take up the bill. With Republicans in control of the House after the Nov. 2 election, prospects for passing climate legislation have only worsened.

“After five years, fewer Americans now believe that man-made climate change is real,” says Denis Hayes, president of the Bullitt Foundation and organizer of the first Earth Day in 1970. “You have to have a post-mortem after that.”

Some in the movement have concluded that it would be better not to have to rely on the fossil fuels industries to pass a climate change bill. The basic problem is a lack of political power. Blackwelder puts it this way, “We are not posing a threat to oust members of Congress.”

The solution, he believes, is building a movement that can play hardball.

The Sierra Club has been radicalized, some say, under new Executive Director Michael Brune, who took the helm in March with a greater focus on corporate power. The Sierra Club, with 64 local chapters, is the most grassroots-based of the national organizations and responded to the BP disaster by calling on Obama to create a plan to move the nation off oil within 20 years.

McKibben’s 350.org is also mobilizing the grassroots. On October 10, the organization sponsored a “Global Work Party,” with 7,347 events in 188 countries–from film-screenings to letter-writing–calling for political action on climate change.

It is work that may benefit from a shift from focusing funds inside the Beltway toward a broadening of the base beyond green activists. “This is not an environmental issue,” says Kelsey Wirth, board member of the Winslow Foundation. “It’s a societal challenge. This is about the future of the world.” Ash agrees: “There’s a general consensus that the climate change issue cannot be dominated by environmentalists.”

Eric Weltman is a senior organizer with Food & Water Watch. He lives in Brooklyn.