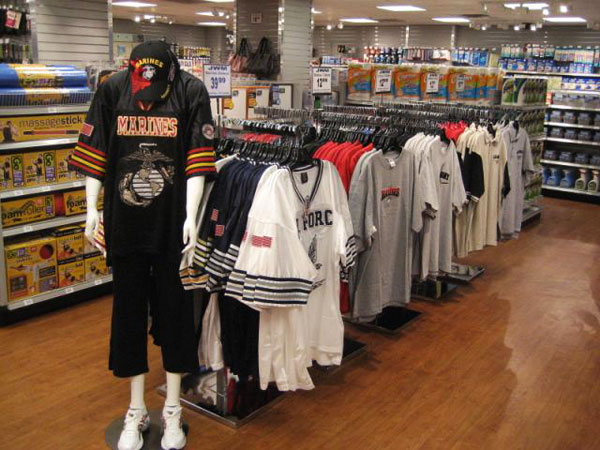 The shelves of the Veteran Canteen Service store within the VA Medical Center in Dallas, Texas, are stocked with cheap goods. But at what cost to workers? (Photo courtesy U.S. Department of Veterans Affairs)

The Department of Veterans Affairs is paying some of its employees—including veterans—close to poverty wages.

Canteen 'employees are among the most exploited and abused workers in the federal government,' says William Preston, president of American Federation of Government Employees Local 17.

“To care for him who shall have borne the battle, and for his widow, and his orphan.”

Abraham Lincoln’s call for Americans to care for Civil War veterans and their families, taken from his Second Inaugural address in 1865, adorns the Department of Veterans Affairs office building in Washington, D.C.

Yet within that Cabinet-level department exists a small agency–the Veterans Canteen Service (VCS)–employing thousands of veterans at near poverty wages. Given the VA’s explicit mission to care for American veterans, Americans ought to be shocked by this fact–but most have never even heard of the canteen service.

In 1946, following reports of rampant price gouging at several VA facilities around the country, Congress established the VCS and charged it with providing inexpensive goods to veterans and their caregivers at VA medical centers around the country. Today, VCS operates a total of 172 retail stores, cafeterias and catering shops in every state but Hawaii. It sells everything from food to shoes to stationary. It’s big business: In 2009, the VCS took in over $370 million in revenue ($23 million more than its expenses)–the highest grossing year in the history of the organization. In 2010, the service is on track to surpass its own record once again.

Who exactly is selling canteen goods and services? According to the VCS, half of the service’s approximately 3,500 employees are veterans. The service’s hourly (nonsupervisory) employees, who form the great majority of the canteen’s overall workforce, are overwhelmingly women and minorities. Leonard Fearn, vice president of VA Council 249, part of the American Federation of Government Employees (AFGE), which represents many VCS workers, estimates that at his location in Portland, Ore., the percentage of female and minority workers is around 75 percent. (This is also true at the Washington D.C. location, where I currently work). VCS declined to provide employee demographic details.

Canteen “employees are among the most exploited and abused workers in the federal government,” says Bill Preston, president of AFGE Local 17, which represents VCS employees working in the nation’s capital.

The starting hourly wage for a VCS retail clerk averages $8.59 in rural areas and $9.60 in urban areas, according to an In These Times investigation. The disparity between hourly and salaried employees is greater by orders of magnitude. The gross annual salary for a full-time clerk starts at about $19,000, while a canteen chief in charge of a VCS location can earn in the neighborhood of $65,000 to $80,000 annually, depending on location. Even higher is the starting pay for a VCS Regional Manager, approximately $105,000 a year.

A VCS employee earning the starting wage who is her household’s sole earner (i.e., supporting a spouse or children) qualifies for public assistance under the federal Supplemental Nutrition Assistance Program (SNAP). “It’s really tough,” says one VCS employee who spoke only on condition of anonymity for fear of management retaliation. “There’s no way you can provide for yourself on what they pay us, much less if you’ve got kids. They treat us like shit and they don’t pay us shit.”

While nearly all VCS starting wages are slightly above the national poverty level, they are far below a living wage. The “finishing” wages aren’t much better: The top rates for these positions, which take years to reach, are only about $2 more an hour. When contacted for this article, a human resources official at VCS headquarters in St. Louis–who asked not to be named due to the subject matter–would only note that “the Canteen Service pay scales are competitive.”

But competitive with what? Mark Puszkarczuk, an Air Force veteran who spent six years as a canteen chief in West Virginia, Pennsylvania and Maryland says, “These surveys compare similar jobs–like fast food and retail positions–and calculate a wage.” In other words, thousands of federal employees, many of whom are veterans, labor for pay comparable to McDonald’s and Wal-Mart. The obvious question is: Shouldn’t our veterans, as well as those who serve and care for them, be earning a living wage?

A promising ruling, but no raise in sight

Many VCS workers believe they deserve better pay–and better working conditions. “I was terminated in retaliation for speaking out and standing up for myself and my co-workers,” says Johnny Eddie, a former receiving Canteen clerk in Brooklyn. In May 2010, Eddie and some of his co-workers were informed by their canteen chief that they needed to leave one hour early every day, Monday through Friday, so they could come in and work on Saturday. They were also informed that there would be no overtime pay for the additional workday due to lack of funds.

Eddie notified his union, AFGE, which in turn notified his boss that employees must be paid overtime. A few weeks later, Eddie, who was still within his first-year VCS probationary status, was fired by his canteen chief. This occurred despite the fact that a regional manager had praised his performance and local managers had told him he would be made a permanent employee when his probationary period (standard for all new workers) was completed.

This story is not uncommon at VCS. The section of law governing VCS allows employees to be fired without Title 5 protection, meaning that VCS employees do not share most VA employees’ right to appeal a wrongful termination before the Merit Service Protection Board (MSPB), an independent agency which protects federal employees from unfair personnel practices. Their lack of MSPB rights has essentially made VCS employees “at will” employees, although an October 28 ruling (PDF link) by the Federal Labor Relations Authority (FLRA) appears to have extended the right to challenge firings to unionized VCS workers.

“By not having any merit protection for their employees, [VCS] has created a hostile working environment. Employees fear for their jobs if they choose to point out the wrongdoings of their supervisor,” Puszkarczuk adds. “They are not subject to whistleblower protection or from the union on a termination. The only recourse they have is an [equal employment opportunity] complaint, if they have the money to spend on legal protection.”

Current law allows the VA Secretary to delegate his authority over the VCS to the agency itself–which he has done, historically. This has allowed the Canteen to effectively police itself with little oversight, which in turn impacts VCS wage scales and working conditions. (The VA refers all questions about VCS employee issues to the VCS central office.)

The VCS’s unusual independence from the VA is underscored on the collective bargaining front. Under the current contract between AFGE and the VA, all workers can file grievances outside of their own department–except for VCS workers, who must to go to their canteen chief’s direct supervisor. This flawed grievance process, paired with the lack of MSPB rights, has often made workers afraid to pursue union representation for fear of termination.

While the recent FLRA ruling seems to have given VCS wage employees a new measure of security, it’s unclear if what they really need–a living wage–will ever appear.

“In most cases in the private sector, an increase in profits would correlate to a more sound and secure working environment for employees,” says Puszkarczuk, referring to VCS’s record revenue levels this year and last year.

“However, in the midst of its most profitable years, the Canteen Service rewards employees, many of whom are veterans, by slashing benefits [and] creating a hostile work environment… The VA needs to give profits back to veterans and treat VCS employees like they treat the rest of their employees.”

Joseph Riedel, who has helped to organize and mobilize pizza delivery drivers and low-wage federal employees, is a veteran of the labor movement. He blogs about labor issues at Virtualpicketline.blogspot.com.