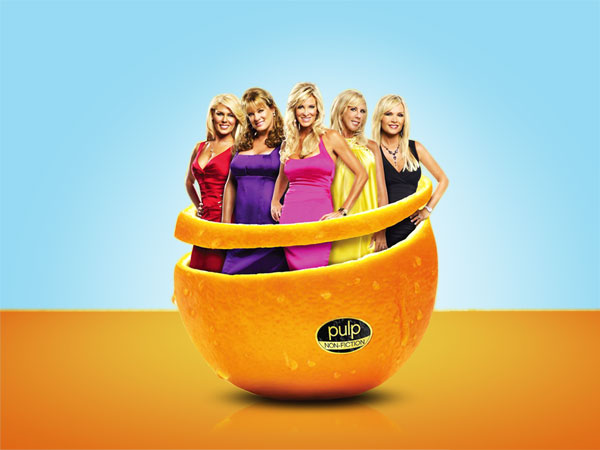 The housewives are not universally vacuous. But they all share an ethos derived from having achieved some sort of ill-defined but transcendent state of Fabulosity.

There is a telling scene in the 2010 season premiere of Bravo’s hit reality show The Real Housewives of Orange County. Gretchen and Lynne have gathered in what looks to be mid-afternoon at a leafy outdoor café, and because it is the premiere, they are supposed to have some catching up to do. Lynne, a very thin, bronzed middle-aged brunette wearing tight white pants, a light blue lace-trimmed bell-sleeved off-the-shoulder top and matching frilly light blue drop earrings, wants to tell Gretchen about her new jewelry line and invite her to an event she is hosting in its honor.

Every aspect of this setup is highly typical of 21st-century reality television. It is entirely staged for the purpose of generating enough scenes to fuse into some sort of narrative about the meaningless lives of heroically shallow people.

Like nearly all the Orange County housewives, Lynne’s lifestyle was sustained by the real estate business, but her husband’s construction firm has gotten no work since the collapse of the California housing market. As she mentions the jewelry event to Gretchen, a 31-year-old platinum blonde in the Playboy mansion mold wearing some sort of checkered corset, Lynne begins to stutter and spasm slightly in the face, causing the younger castmate to intuit that she has already invited Tamra, another housewife who accused Gretchen on the reunion show of dating another man during the filming of the previous season, during which she had supposedly been totally preoccupied caring for her terminally ill fiancé Jeff.

Tamra’s accusation was based on the assertion of a man who had called her claiming to have been Gretchen’s actual boyfriend during the prior season, as well as some lewd (though not that lewd, in the scheme of things) photos of Gretchen that appeared on the Internet at some inappropriately brief time after Jeff died from leukemia.

Gretchen maintains–and I paraphrase, because her vocabulary is slightly more limited than this–that the guy is a delusional stalker and that Tamra’s eagerness to believe scurrilous gossip about her fellow housewives renders her untrustworthy. She pleads with Lynne not to forget how viciously two-faced she had been toward both of them.

Gretchen (widens eyes; she is the most likable housewife because her eyes are so big that when she widens them incredulously this way the viewer senses she might share their sense of profound dismay that such people as her co-stars exist): Don’t you remember? When she wrote [in a previously addressed e-mail] about how you and I “make her skin crawl?”

Lynne (shakes head despairingly): I don’t know what to believe.

Gretchen: It’s right there! I copied and pasted it for you!

Lynne (continues shaking head, gestures toward eyes and ears): I don’t know, I don’t actually believe anything until I actually hear it and see it with my own two eyes and two ears.

Gretchen: You’ve seen it, and you’ve heard it.

What is so compelling about this scene is that, for the audience at least, the basis of the appeal of The Real Housewives franchise is the way it has managed over and over again to engender–from Orange County to Atlanta to New Jersey to Beverly Hills to the White House state dinner–complete disbelief at what we have just heard and seen with our own eyes and ears.

For the most part the housewives are, as opposed to the casts of reality shows featuring younger people, not exactly in on the joke. Nor are they universally vacuous or devoid of redeeming qualities. But they all share an ethos derived from having achieved some sort of ill-defined but transcendent state of Fabulosity.

What makes them superlative in the reality-show universe is the sort of pathological consumption habits that seemed to have programmed all the women to respond to each victory and defeat with a colossal piece of jewelry or a lavish six-course dinner party held to display a newly commissioned wall-sized portrait of oneself.

At the beginning of each show we are treated to a fabulous lifestyle montage of each housewife as her voice in the background sassily intones a personal statement, such as, “Money is a girl’s best friend … and I like to have a lot of friends,” or “Am I high maintenance? Of course I am. Look at me!” or “I don’t keep up with the Joneses; I am the Joneses.” City by city, region by region, the evidence mounts: A massive population of middle-aged women take Sex and the City very, very seriously.

Appropriately, Lynne’s personal credo is: “It’s not how much money you have, it’s how good you look spending it.” But it costs money to look good, and Lynne feels bad about her neck, and to peddle a jewelry line in compliance with such a brand motto, she determines it must be smoothed with reconstructive surgery. The era during which a kindly plastic surgeon might provide such a service complementary for the publicity having long since passed in Orange County, she signs up for an installment plan.

Back at Lynne’s house, one of her two teenage daughters answers the door to a strange man who hands her an envelope he says contains an eviction notice. This is peculiar, given that they had just thrown a housewarming party. “Did that really just happen, or am I so fucking hungover that I’m still dreaming?” she asks her sister groggily as she wanders into the den holding her hand over the nose her mother will later pay to have fixed in commemoration of her nineteenth birthday.

The eviction notices, foreclosures, judgments and failed mortgage modifications that have beset 30-odd cast members of The Real Housewives franchise alone since the onset of the financial crisis could sustain its own scornographic tabloid magazine.

Indeed, in the new anthology Reality Matters, the former Daily Show correspondent Stacey Grenrock-Woods credits The Real Housewives of New York for buoying her flagging spirits throughout the many months she spent unemployed during the financial crisis. Its characters are so irredeemably repugnant–and so brilliantly edited to highlight this fact–that she feels like less of a failure.

And, truth be told, something was deeply satisfying about the outrage the Republican Party was burdened with manufacturing in response to the successful infiltration of the Obama White House’s first state dinner by Tareq and Michaele Salahi, a northern Virgina couple competing for a spot in the Washington, D.C., iteration of Real Housewives.

The Salahis might have belonged to al Qaeda; but it seemed somehow much more fitting that the evening’s greatest national security threat was simply the latest bleached-blonde member of the newest chapter of America’s leading brand of vacuous middle-aged TV famewhores. n

This essay was adapted from Bad News: How America’s Business Press Missed the Story of the Century (New Press), edited by Anya Schiffrin.