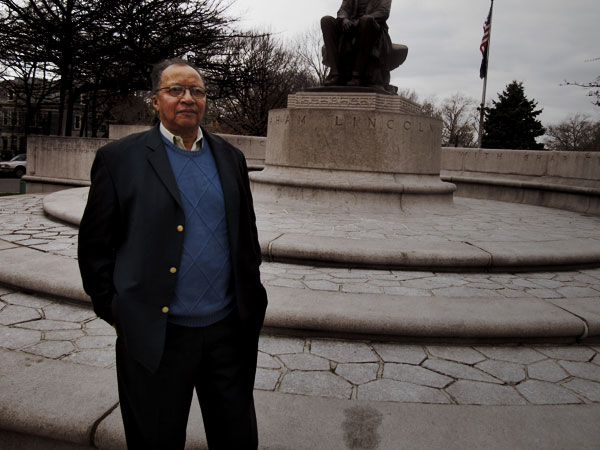 “It feels like the 1950s all over again,” Walter Dean Myers says. (Photo by Jon Whiten)

Walter Dean Myers writes for the boy he used to be. In young adult (YA) novels like Dope Sick and Sunrise Over Fallujah, the 73-year-old Harlem native and author of more than 80 books for youth explores the high-stakes choices teens make in violent and impoverished communities. A frequent visitor to America’s juvenile detention facilities, Myers’ rough upbringing compels him to reach out to youth at the margins; it also informs his art.

His 2010 book Lockdown–a finalist for the National Book Award for Young People’s Literature–is about a boy who must choose between protecting a younger boy from a gang assault and looking after himself.

In a field celebrated for its formal experimentation, Myers, whose influential classic, Monster, is written in screenplay format, stands as a titan to the legions of new YA authors working today.

Currently, Myers is at work on All the Right Stuff, a novel inspired by Jean-Jacques Rousseau’s The Social Contract.

He spoke to In These Times from his home in Jersey City, N.J., about the importance of mentors and the debt he owes James Baldwin.

The field of young adult literature has exploded, attracting authors who hadn’t previously published for teens. What responsibilities does an author have to his teen audience?

I’m torn, because I feel a responsibility of moral leadership when I write for teens, but I also think that you write for yourself first. I look at the young people that I deal with and so many of them are in so much need of guidance, the sort of guidance that I had as a kid. Many kids I meet don’t have that. I want my books to prompt a discussion of values.

How did you become involved working in juvenile detention facilities?

I was working a lot in adult prisons and I began to realize that all these guys in prison have kids. I was at a juvenile prison recently and I asked two 15-year-old girls what was the worst part about being in jail and they said, “Not knowing where our children are.” They had kids. All these young men and women with children are going to jail. Who’s going to raise those kids? Somebody has to at least talk to them and say, “Look, this is what you did, you should have been thinking about this earlier before you were in trouble.” I feel that I have a responsibility to all kids to visit them, to see how they’re doing and to offer whatever advice that I have to give them.

What do you say to kids in these facilities about their futures?

I tell them they’re going to have to find something outside themselves just to survive.

When I was writing Lockdown, I was reading Man’s Search For Meaning by Viktor Frankl. Frankl, who was in a concentration camp, developed a theory that no matter how miserable your own existence is, you have to come out of it and find something to care for and love that’s beyond yourself. This is what these kids have to do. There are not sufficient programs to help them. There’s nothing in our society that tells them they’re OK. They feel absolutely helpless. And one of the things I say is, “I’ve been through this experience.”

I dropped out of school at 15 and my mom was an alcoholic. That was devastating. I couldn’t go to school and raise my hand and say, “Oh, I couldn’t do my homework because my mom was lying drunk on the street and I had to help her home.” That stuff absolutely fills your head up. You can’t think of anything beyond that. I say to them, “It doesn’t get easier, but you have to look at yourself and be self-protective.”

What do you think would be a more effective way to deal with youths who commit crimes?

I think we need alternative sentencing and a strong mentoring system. They need mentors who will show them the deeper values than they would normally receive. There’s one boy I’m working with now in a facility who writes science fiction. He may never become a writer, but at least he’ll think about his work with me and he’ll have some hope.

My time as a young person was a lot easier than it is now. When I was coming up, if you earned the minimum wage you could find decent housing. Not today. And now states are quietly closing down the alternative programs along with the few juvenile detention facilities they have because there’s no money. So, a kid gets into trouble, what do they do with him? They move him to upstate New York, far away from his community. I see many kids who hate being in jail, but they’re afraid to come out.

They know they’re in the cycle. And they don’t have support once they’re out. I went to a facility recently and saw all these kids lined up. I asked why and I was told, “Oh, they’re getting their medications.” These are young men being given psychotropic drugs like Librium in the morning, to calm them. They’re being medicated. So, then they leave the prisons and go back to the streets and they begin self-medicating with illegal drugs, which is what so much drug use is all about. Each time they go back in it gets more severe. It’s very discouraging.

When I was growing up, what I had going for me was my reading. I was reading well, and I was reading good stuff. I had a larger sense of myself as a person. And that’s what kept me from going to jail.

You’ve said that you get annoyed when people trumpet reading as an escape. Is there value in reading about experiences different from your own?

There’s value, but it’s risky. I remember talking to James Baldwin and telling him that when I was growing up I was reading all these British authors and looking for values in those people and not ever understanding that I was devaluing my own life. I was devaluing my own family and my own community because I never read about them. And as strange as it might seem, I decided I was not going to be black. I was going to be an intellectual. And Baldwin said he experienced the same thing. He did not want to be black or gay, which was why he went to Europe. I felt pleased to hear him say that he had the same experience, but then I felt bad. I wished I’d had the knowledge that I wasn’t alone when I was 14. I could have used it.

One of the things I want to do in my books is include a recognizable black community so that young people can at least see their community represented.

What would you like to see President Barack Obama do or say about the state of the black community?

I would love to see him acknowledge that we are losing our youth and that we’ve lost the benefits we gained from the Civil Rights Movement. Look, equal opportunity doesn’t mean diddly-squat if you’re not equal. If I were fighting a heavyweight, you could tell me that I have equal opportunity because I have two arms and two legs, but the reality is that I have none whatsoever. And we’re turning out these kids at a fantastic rate who are so far behind educationally that they have no shot at getting a decent job. How are these kids going to make a living in a country in which manufacturing is totally lost?

What is getting in the way of the African-American community organizing as it did in the ’60s and demanding that it be treated like part of this country?

The African-American community is divided as it never has been in the past. The black middle class and upper middle class no longer feel the connection to the poor that they used to. I remember when Malcolm X was alive and he said, “What do they call a black man with a Ph.D.? A nigger.”

Today, that’s not happening. Racism exists but it’s no longer legally protected anywhere in the States. Too many blacks are wallowing in the comforts of their first-class rides and not realizing that the difficulties of the lower classes are at least partially racially based and threaten us all. It feels like the 1950s all over again: Everyone is in it for themselves.

Where do you see hope for young Americans?

I see it in young adult literature, which is addressing more issues now than it did 30 years ago. Today, although so much of the field is vampire books, there are a lot of interesting writers approaching the real problems in our society.

I think literature at least gives you the possibility of speaking up. And at the very least, in young adult literature you can make statements that help kids find themselves in the book. When that happens they won’t be as isolated. That’s what all art does. Art removes the isolation. I feel that I have to do this. I don’t have a choice.