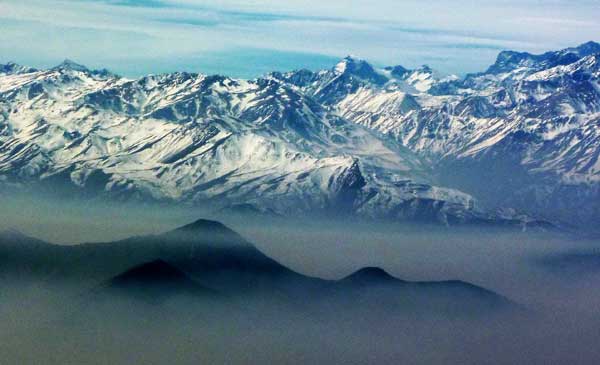 Santiago lies under a layer of smog caused by local industries and the growing number of cars in the Chilean capital. (Martin Bernetti/AFP/Getty Images)

We must confront ‘well-informed futility syndrome’ to overcome our fossil fuel addiction.

What will we say when our grandchildren ask us the names of the departed? Or, by then, will the loss of favorite animals be the least of our worries?

To Despair or Not to Despair, That Is the Question

What do you think? Is confronting climate change the moral issue of our time?

• Or should we make like a polar bear and adapt? After all, the planet may warm and seas may rise and crops may fail, but surely some humans--at least the fittest (and richest)--will survive.

• Or is such grim optimism too complacent--and complicit?

We invite you to share your thoughts. E-mail despairnot@inthesetimes.com. Please include your phone number and address. The In These Times Board of Editors will compile your contributions, which will be published in an upcoming issue of In These Times or at www.InTheseTimes.com.

In Alton, Ill., downstream from Peoria, the Illinois River town where I grew up, the abolitionist Elijah Lovejoy was pumped full of bullets on a dark November night by a mob intent on silencing the man once and for all. On this evening, they succeeded.

By dawn, Elijah was dead, and his printing press–the means by which he distributed his radical ideas–lay at the bottom of the Mississippi River. The year was 1837. The Rev. Lovejoy, a Presbyterian minister who attended Princeton Theological Seminary, was buried on this 35th birthday.

But the story doesn’t end there.

Almost immediately, membership in antislavery societies across the nation swelled. Vowing to carry on the work of his fallen friend, Edward Beecher, president of Illinois College in Jacksonville, threw himself into abolitionist efforts and, in so doing, inspired his sister, Harriet Beecher Stowe, who went on to write the most famous abolitionist treatise of all: Uncle Tom’s Cabin. Meanwhile, Elijah’s brother, Owen Lovejoy, turned his own house into a station along the Underground Railroad. Owen went on to win a seat in Congress and, along the way, befriended a young Illinois politician by the name of Abraham Lincoln.

These facts impressed me as a child.

When I read Reverend Lovejoy’s biography as a grown-up and mother, I found other things impressive. Such as the fact that, at the time of his assassination, Elijah had a young family. And yet, in the weeks before his death–when it became clear that the mob pursuing him was growing bolder by the hour–he did not desist from speaking out against slavery. So Elijah declared in one of his final speeches:

While all around me is violence and tumult, all is peace within…. I sleep sweetly and undisturbed, except when awakened by the brickbats of the mob.

Truly? With a pregnant wife in the bed next to him and a 1-year-old son in the next room? He wasn’t worried?

A letter to his mother in Maine tells a more nuanced story:

Still I cannot but feel that it is harder to “fight valiantly for the truth” when I risk not only my own comfort, ease, and reputation, and even life, but also that of another beloved one.

And then there’s this poignant aside:

I have a family who are dependent on me… And this is it that adds the bitterest ingredient to the cup of sorrow I am called to drink.

Here’s something else that I’ve noticed while reading his words. To the slave owners and murderous thugs, Elijah spoke calmly. He reserved his fierce language for the members of the community who gladly lived in the free state of Illinois but wished to remain above the fray: the ones who added their signatures to a resolution asking him to cease publication of his newspaper and leave town, but would not sign a resolution that urged protection of law against mob rule; the ones who agreed that slavery was a homicidal abomination but who feared that emancipation without recompense to slave owners for loss of property would be socially destabilizing; the ones who believed themselves upstandingly moral but who chose to remain silent about the great moral crisis of the day.

Two crises, one cause

In the spirit of Elijah Lovejoy–the man who is the namesake of my 9-year-old son–the time has come for outspoken, full-throated heroism in the face of the great moral issue of our own day: the environmental crisis–an unfolding calamity whose main victims are our own children and grandchildren.

In fact, the environmental crisis is actually two crises, although they share a common cause. You could view it as a tree with two main branches: One branch represents what is happening to our planet through the atmospheric accumulation of heat-trapping gases (most notably, carbon dioxide and methane). The second branch represents what is happening to us through the accumulation of inherently toxic chemical pollutants in our bodies.

The trunk of this tree is an economic dependency on fossil fuels, primarily coal (plant fossils) and petroleum and natural gas (animal fossils). When we light them on fire, we threaten the global ecosystem. When we use them as feedstocks for making stuff, we create substances–pesticides, solvents, plastics–that can tinker with our subcellular machinery and various signaling pathways that make it run.

Biologist Rachel Carson first called our attention to these manifold dangers in her 1962 book, Silent Spring. She wrote, “Future generations are unlikely to condone our lack of prudent concern for the integrity of the natural world that supports all life.” Since then, the scientific evidence for the disintegration of our world has become irrefutable, and members of the future generations to whom she was referring are now occupying our homes.

They are our kids.

I mean this in the most basic ways. When my son Elijah, at age 4, asked to be a polar bear for Halloween, I sewed a polar bear costume–and I did so with the full knowledge that his costume might outlast the species. No other generation of mothers before mine has ever borne such knowledge–nor wondered if we should share this terrible news with our children. Or not. It’s a novel situation. Indeed, according to the most recent assessment, one in every four mammal species (and one in every three marine animals) is now threatened with extinction, including that icon of Halloween itself: the little brown bat. Thus, animal costumes whose real-life correspondents have been wiped from Earth may well become commonplace.

This leads me to wonder: What will we say when our grandchildren ask us the names of the departed? When bats, bees, butterflies, whales, polar bears and elephants disappear, will children still read books about them? Will they want to dress up as vanished species? Or, by then, will the loss of favorite animals be the least of their worries?

Chronic childhood diseases linked to toxic chemical exposures are rising in prevalence. Here are a few of the current trends:

• 1 in 8 U.S. children is born prematurely. Preterm birth is the leading cause of death in the first months of life and the leading cause of disability. Its price tag is $26 billion per year in medical costs, special services and lost productivity. Preterm birth has demonstrable links to air pollution, especially maternal exposure to fine particles and combustion byproducts of the type released from coal-burning power plants.

• 1 in 11 U.S. children has asthma, the most common chronic childhood disease and a leading cause of school absenteeism. Asthma symptoms have been linked to certain ingredients in plastic (phthalates) as well as outdoor air pollution, including traffic exhaust. The annual cost of childhood asthma is estimated at $18 billion. Its incidence has doubled since 1980.

• 1 in 10 U.S. children has a learning disability, and nearly 1 in 10 has attention deficit/hyperactivity disorder. All together, special education services now consume 22 percent of U.S. school spending–about $77.3 billion per year at last count. Neurodevelopmental disorders have significant associations with exposures to air pollution, organophosphate pesticides like diazinon, and the heavy metals lead, mercury, and arsenic, among others.

• 1 in 110 children has autism or is on the autism spectrum. Annual costs are $35 billion. Causes are unknown, but exposure to chemical agents in early pregnancy is one of several suspected contributors.

• 1 in 10 U.S. white girls and 1 in 5 U.S. black girls begin breast development before the age of eight. On average, breast development begins nearly two years earlier (age 9) than it did in the early 1960s (age 11). A risk factor for breast cancer in adulthood, early puberty in girls is associated with increasing body fat as well as exposure to some hormonally active chemical agents known as “estrogen mimickers.” We have no cost estimates for the shortened childhoods of girls.

All together, asthma, behavioral problems, intellectual impairments and preterm birth are among the “new morbidities of childhood.” So concludes a 2006 federally funded investigation of pediatric environmental health. Ironically, by becoming so familiar a presence among children, these disorders now appear almost normal or inevitable. And yet, with an entirely different chemical regulatory system, farm bill and energy policy, their prevalence might be much reduced.

The fact that we do not identify and abolish hormone-disrupting, brain-damaging chemicals to which children are routinely exposed raises profound ethical questions. The authors of the pediatric health investigation, published in Environmental Health Perspectives, put it this way:

In the absence of toxicity testing, we are inadvertently employing pregnant women and children as uninformed subjects to warn us of new environmental toxicants. … Paradoxically, because industry is not obligated to supply the data on developmental neurotoxicity, the costs of human disease, research, and prevention are socialized whereas the profits are privatized.

In the absence of federal policies that protect child development and the ecology of the planet on which our children’s lives depend, we parents have to serve as our own regulatory agencies and departments of interior.

Already manically busy, we are encouraged by popular media reports to read labels, consult websites, vet the contents of birthday party goody bags, shrink our carbon footprints, mix our own nontoxic cleaning products, challenge our school districts to embrace pesticide-free soccer fields and limit the number of ounces of mercury-laced tuna fish consumed by each child per week.

Biologist Sandra Steingraber is a visiting distinguished scholar at Ithaca College in Ithaca, New York. Her most recent book is Having Faith: An Ecologist’s Journey to Motherhood.