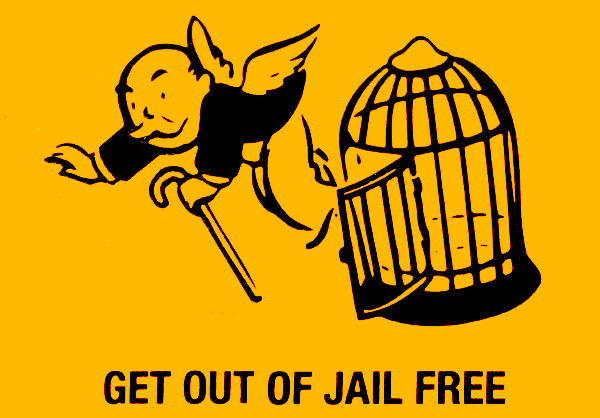 In the long-ago epoch when Bill Clinton made a credible-sounding populist run at the presidency, he hymned the American dream as a compact securing a better future for those who “worked hard and played by the rules.” Here at the shank end of the great financial collapse of 2008, however, the national credo is pretty much “what work?”–and “screw the rules.”

One hears many sober orations on the importance of personal accountability for the comparatively powerless. Undocumented immigrants are lawbreakers, by definition. Unionized teachers and government workers are coddled pencil-pushers, irresponsibly jeopardizing public austerity for the sake of their bloated pensions and their perverse desire to bargain collectively with their employers, etc.

However, when it comes to the leading issue of our age–the deeply imbalanced structure of economic reward and punishment–no one is responsible for anything. In terms of the law, the 2008 meltdown may as well have been a natural disaster.

That was pretty much the scene laid out in an April 14 front-page dispatch by New York Times financial columnist Gretchen Morgenson, noting just how far we’ve come since the 1,000-plus federal prosecutions in the aftermath of the 1980s S&L debacle. Morgenson explains that back in the dismal autumn of 2008 Timothy Geithner, then the head of the New York branch of the Federal Reserve, met Andrew Cuomo, then the attorney general of New York and a self-styled crusader against Wall Street impunity. The two agreed, in essence, that the fix was in: Geithner was arranging the massive federal bailout of the flailing AIG, which was holding billions in toxic debt the company could never hope to repay. According to three Morgenson sources, Geithner told Cuomo that criminal prosecutions would be ill-advised at this delicate moment; the shaky financial markets would only freak out further over the prospect that their masters could be delivered into the hoosegow. (Cuomo denies that Geithner urged him to retire his prosecutorial authority and Geithner primly insists that he was seeking “to protect taxpayers” in streamlining the AIG bailout–a rationale that’s a bit like Kim Kardashian holding herself forth as a crusader against public indecency.)

And so it came to pass. In the financial crime of the century, not a single federal prosecution has stuck, and precious few have been initiated.

This is not merely a marked contrast to the unwinding of the S&L crisis; it also makes for a very awkward case study alongside the criminal prosecutions mounted in Britain and Iceland in the wake of the global IceSave scandal that pitched Iceland’s public treasury into receivership. England’s Office of Serious Fraud has arrested nine leading bankers–seven stateside, and two in Iceland–and has won the cooperation of at least two of them in a widening criminal inquiry.

In the post-accountability culture of the United States, such an outcome is unthinkable. As a case in point, Morgenson reprises the tale of Countryside Loans’ former brigand-in-chief Angelo Mozilo, who originated hundreds of billions’ worth of rancid home loans in California and the Sunbelt. After the Securities and Exchange Commission launched a tepid civil complaint against Mozilo in 2009, he was permitted to buy his way out of trouble with a $22.5 million settlement, while pocketing hundreds of millions more in corruptly procured executive compensation.

Mozilo eluded criminal prosecution thanks to regulatory failure. In 2007, as the Countrywide empire began rotting from within, the Bush White House placed it under the Office of Thrift Supervision. Countrywide’s minder at the agency was John M. Reich, a onetime banker appointed by Bush in 2005. California consumer advocate Robert Gnaizda recalled suggesting to Reich that the OTS should set up a hotline to field calls from aggrieved Countrywide mortgage-holders. “I told John, ‘This is what any police chief does if he wants to solve a crime,’ ” Gnaidza told Morgenson. “John was uninterested. He told me he was a good friend of Mozilo’s.” Reich now says (surprise, surprise) that he has no recollection of any such discussion.

But really, why dwell on these unlovely details? Nowadays, we take this sort of intentional misrepresentation of financial instruments for granted.