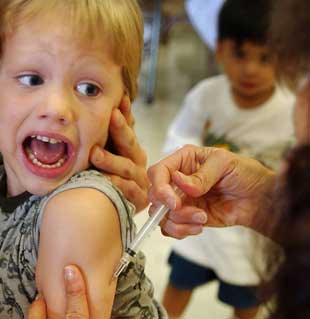 Iowa becomes the first state to ban thimerosal from vaccines

With little fanfare or national media attention, Iowa Gov. Thomas J. Vilsack on May 14 signed into law a state ban on the use of thimerosal, a mercury preservative used in vaccines. Iowa becomes the first state in the country to ban thimerosal, which is at the center of medical and legal debates over the cause of autism disorders, now affecting as many as 1 in 250 children (See “Autism in a Needle,” December 8, 2003). Similar bills are pending in the legislatures of Missouri and Nebraska, and in April, a bill to ban thimerosal was introduced in Congress.

Iowa’s action opened a new political front in a parent-led movement to establish a link between thimerosal and autism and to hold accountable pharmaceutical companies and the federal health agencies that permitted its use since the ’40s. Only in 1999, after mounting scientific concerns about possible toxicity to children of mercury-laced vaccines, did the Centers for Disease Control and Prevention (CDC) issue a recommendation that vaccine makers remove thimerosal. The CDC still has not issued an outright ban on thimerosal, and some vaccines, including flu shots, still contain trace amounts.

“It is an important milestone that it was passed,” says Sallie Bernard, co-founder of SAFE Minds, an autism advocacy and research organization. “Once you have one state going in that direction, other states are more likely to follow along.”

Iowa’s anti-thimerosal action came four days before a panel of the federal advisory Institute of Medicine (IOM) issued its final report on thimerosal in vaccines. That May 18 report, which received widespread press attention, concluded that no evidence supported this conclusion. While the IOM report sought to resolve the controversy over thimerosal, Bernard says the debate is far from over. “The IOM report makes things more difficult for us in terms of convincing the wider medical community that this is a problem,” she says. “We don’t want the IOM to shut down the science or the debate so the legal system doesn’t have anything to work with.” Bernard says many new research efforts on thimerosal and autism were under way, including some funded by SAFE Minds.

In Missouri, a thimerosal ban was approved in the House in March. But in the closing session of the Senate last month, state Sen. Ken Jacob launched a filibuster that prevented the bill from coming to a vote. According to Missouri campaign finance records, Jacob received a $500 contribution in December 2003 from GlaxoSmithKline and $500 from Novartis Pharmaceuticals in March 2004. Both drug companies manufacture vaccines. A similar bill banning use of mercury preservatives in vaccines was introduced in the Nebraska legislature in January 2004.

Iowa state Sen. Ken Veenstra, author of the thimerosal ban, says he saw no direct pressure from the pharmaceutical companies, but their influence was nonetheless felt in the wrangling over the thimerosal ban. “They have influence over the medical profession in general, and they have consistently sent the message, ‘This stuff is OK, don’t worry about it,’ ” Veenstra says. “As a result, the people we rely on—the medical practitioners—believe the message and it’s hard to combat that notion. We had to overcome that obstacle.”

Parent activists with Biological Education for Autism Treatment in Iowa, or BEAT-Iowa, worked with Veenstra to shape the legislation. Dana Halverson, a BEAT-Iowa founder, is the parent of a 5-year-old girl who is autistic and has a range of intestinal and autoimmune disorders that Halverson believes were triggered by thimerosal in her vaccines. “The biggest problems are we’ve had to go through so much financial and emotional stress—the financial stress creates so much emotional stress,” Halverson says. Last year, she and her husband incurred $40,000 in medical expenses for their daughter, with only $10,000 covered by insurance.

Establishing the thimerosal-autism link is the ultimate goal of advocates because it also would affix liability for the financial and emotional burdens suffered by thousands like the Halversons. But Iowa’s ban won’t immediately change the legal playing field for those seeking compensation for their autistic children, according to Houston trial lawyer Andrew Waters. “As far as impact on litigation, it will be relatively minimal for the time being,” Waters says. “It would have more effect on a case in Iowa.” Waters filed the country’s first thimerosal lawsuit against Eli Lilly, inventor of thimerosal, and other drug companies on behalf of an autistic boy and his parents. He now represents the Halversons and many other parents. “As things stand, thimerosal hasn’t been banned by the federal government although there is evidence that some people think it’s dangerous enough to ban,” he says.

Meanwhile, on April 5, Reps. Dave Weldon (R-Fla.) and Carolyn Maloney (D-N.Y.) introduced a bill, shaped by SAFE minds advocates, that would eliminate thimerosal from vaccines. Bernard said activists are focusing on building support in the House to make sure the bill doesn’t languish in committee. “We’re optimistic,” she says, “but a lot depends on how the issue is seen in the next couple months.

Annette Fuentes is a New York-based journalist who writes frequently on health and social policy issues. A contributing editor of In These Times, she is co-author with Barbara Ehrenreich of Women in the Global Factory.