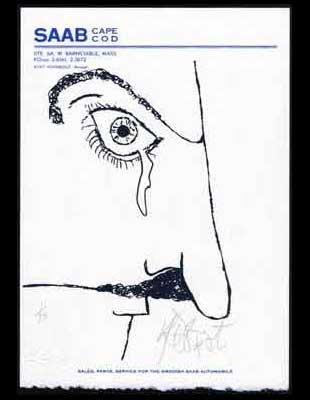 Have I Got a Car for You!

I used to be the owner and manager of an automobile dealership in West Barnstable, Massachusetts, called “Saab Cape Cod.” It and I went out of business 33 years ago. The Saab then as now was a Swedish car, and I now believe my failure as a dealer so long ago explains what would otherwise remain a deep mystery: Why the Swedes have never given me a Nobel Prize for Literature. Old Norwegian proverb: “Swedes have short dicks but long memories.”

Listen: The Saab back then had only one model, a bug like a VW, a two-door sedan, but with the engine in front. It had suicide doors opening into the slipstream. Unlike all other cars, but like your lawnmower and your outboard, it had a two-stroke rather than a four-stroke engine. So every time you filled your tank with gas you had to pour in a can of oil as well. For whatever reason, straight women did not want to do this.

The chief selling point was that a Saab could drag a VW at a stoplight. But if you or your significant other had failed to add oil to the last tank of gas, you and the car would then become fireworks. It also had front-wheel drive, of some help on slippery pavements or when accelerating into curves. There was this selling point as well: As one prospective customer said to me, “They make the best watches. Why wouldn’t they make the best cars, too?” I was bound to agree.

The Saab back then was a far cry from the sleek, powerful, four-stroke Yuppie uniform it is today. It was the wet dream, if you like, of engineers in an airplane factory who had never made a car before. “Wet dream,” did I say? Get a load of this: There was a ring on the dashboard, connected to a chain running over pulleys in the engine compartment. Pull on it, and at the far end it would raise a sort of window shade on a spring-loaded roller behind the front grill. That was to keep the engine warm while you went off somewhere. So, when you cam back, if you hadn’t stayed away too long, the engine would start right up again.

But if you stayed away too long, window shade or not, the oil would separate from the gas and sink like molasses to the bottom of the tank. So when you started up again, you would lay down a smokescreen like a destroyer in a naval engagement. And I actually blacked out the whole town of Woods Hole at high noon that way, having left a Saab on a parking lot there for about a week. I am told old timers there still wonder out loud about where all that smoke could have come from. I came to speak ill of Swedish engineering, and so diddled myself out of a Nobel Prize.