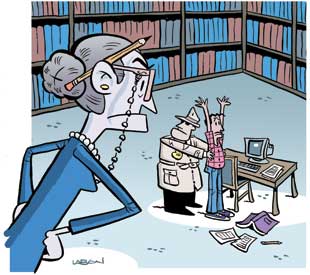 I Love You, Madame Librarian

I, like probably most of you, have seen Michael Moore’s Fahrenheit 9/11. Its title is a parody of the title of Ray Bradbury’s great science fiction novel, Fahrenheit 451. This temperature 451° Fahrenheit, is the combustion point, incidentally, of paper, of which books are composed. The hero of Bradbury’s novel is a municipal worker whose job is burning books.

And on the subject of burning books: I want to congratulate librarians, not famous for their physical strength or their powerful political connections or their great wealth, who, all over this country, have staunchly resisted anti-democratic bullies who have tried to remove certain books from their shelves, and have refused to reveal to thought police the names of persons who have checked out those titles.

And still on the subject of books: Our daily sources of news, papers and TV, are now so craven, so unvigilant on behalf of the American people, so uninformative, that only in books can we find out what is really going on. I will cite an example: House of Bush, House of Saud by Craig Unger, published near the start of this humiliating, shameful blood-soaked year.

In case you haven’t noticed, and as a result of a shamelessly rigged election in Florida, in which thousands of African Americans were arbitrarily disenfranchised, we now present ourselves to the rest of the world as proud, grinning, jut-jawed, pitiless war lovers, with appallingly powerful weaponry and unopposed.

In case you haven’t noticed, we are now almost as feared and hated all over the world as the Nazis were.

In case you haven’t noticed, our unelected leaders have dehumanized millions and millions of human beings simply because of their religion and race. We wound and kill ’em and torture ’em and imprison ’em all we want.

So I am a man without a country, except for the librarians and the Chicago-based magazine you are reading, In These Times.

Before we attacked Iraq, the majestic New York Times guaranteed that there were weapons of mass destruction there.

Albert Einstein and Mark Twain gave up on the human race at the end of their lives, even though Twain hadn’t even seen World War I. War is now a form of TV entertainment. And what made WWI so particularly entertaining were two American inventions, barbed wire and the machine gun. Shrapnel was invented by an Englishman of the same name. Don’t you wish you could have something named after you?

Like my distinct betters Einstein and Twain, I now am tempted to give up on people too. And, as some of you may know, this is not the first time I have surrendered to a pitiless war machine.

My last words? “Life is no way to treat an animal, not even a mouse.”

Our president is a Christian? So was Adolf Hitler.

What can be said to our young people, now that psychopathic personalities, which is to say persons without consciences, without a sense of pity or shame, have taken all the money in the treasuries of our government and corporations and made it all their own?