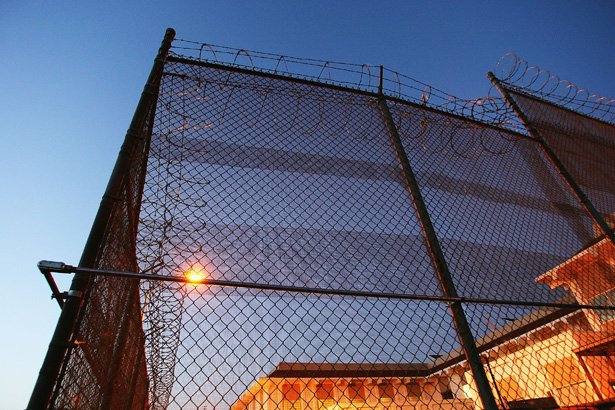 The Santa Barbara County Detention and Correctional Facility, which holds an average of more than 600 inmates daily.
(Photo by David McNew/Getty Images)

More than 2,500 juveniles in the United States are serving life in prison without possibility of parole. The U.S. is the only country in the world where this sentence is handed down to minors, and a new report from The Sentencing Project confirms what prison reform activists have long argued: These individuals, who were as young as thirteen when they committed the crimes for which they are incarcerated, are likely to have lived in poverty, witnessed violence and been the victims of physical and sexual abuse as children.

The report, "The Lives of Juvenille Lifers," is derived from the first-ever national survey of juvenile inmates serving life sentences. Almost 1,600 individuals responded to questions about their circumstances prior to conviction and their experiences in prison.

Among the report's findings were that:

“The goal of the survey was to find out more about who these people are, the family, community backgrounds in order to have a better sense of where this comes from,” Marc Mauer, executive director of The Sentencing Project, said in a press conference last week.

The study of juvenile sentencing found similar dynamics, with African American offenders twice as likely to be sentenced to life without parole for killing a white person as white offenders were to receive the same sentence for killing a black person.

The average age for juveniles sentenced to life without parole was 16 years, meaning that a majority of these teenagers effectively grew up in prison. While the report notes "a perception that inmate behavior is dominated by violence and manipulation," the survey found that juvenile lifers often engaged more positively with their environment over time. After 10 years, almost 35 percent of lifers had not received a disciplinary action in at least three years. After 21 years, almost 60 percent had no incidents. "Many lifers view their prison environment as all they have left to control in life," the report notes, "and thus strive to make the most of the resources available in prison."

Such resources, including educational and job programming, are increasingly limited, however. Roughly 60 percent of survey respondents were not engaged in rehabilitation programming, but not for lack of interest. Almost 80 percent could not participate because of restrictions and unavailability.  Thirty-two percent were not allowed to attend those programs because of their life sentence, the rationale being that they will never re-enter society and do not need to learn life and work skills.

In 2010, the U.S. Supreme Court ruled that juveniles who had committed nonhomicide offenses could not receive sentences of life without parole. The ruling, though it affected less than 6 percent of the juvenile lifer population, used medical science to argue that the death penalty for juveniles was cruel and unusual punishment. A growing body of research shows that the teenage brain differs from that of adults and does not stop developing until age 25. Developmental factors, combined with difficult social circumstances, may prevent youth offenders from realizing the full implications of their actions. The implication of this science, as argued by the Supreme Court, is that deterrence through retributive action is an ineffective violence prevention strategy for juveniles who frequently lack the foresight to factor the potential consequences into their decision-making.

The Sentencing Project argues that the same rationale applies to sentencing juveniles to life without parole. “As a society we are off track in the way we punish youth for their misdeeds,” said Ashley Nellis, the author of the report. “We used to account for these important differences between juveniles and adults. We believed they were deserving of a different system of justice. Overtime the sentiment has shifted and we are now quick to throw these lives away.”

Most states allow life imprisonment without parole for juveniles. Six states prohibit that sentence, including Texas, despite its reputation for a harsh penal system. Mauer suggests that instead of serving life in prison without the chance of parole, a professional review board that would look at juvenile cases after a period of 10 years to see if they were suitable for release.