How Real Is Orange is the New Black’s Take on Prison Pregnancy? 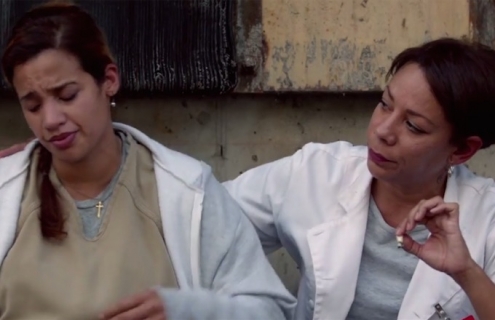 In a still from season 3 of Orange Is the New Black, a visibly pregnant and worried Daya (L) is comforted by Gloria (R).   (Netflix)

Season Three of Orange is the New Black comes out today, and this season, Daya Diaz (Dascha Polanco) reaches her due date.

Daya's pregnancy is no longer a secret from guards and fellow prisoners. She's visibly pregnant (although no one seems to know how far along she is) and everyone knows the reason for her plus-size uniform. We see her mooning over the correctional officer who impregnated her and planning their future together. We see her worrying about who will take care of her baby. We see her continuing to scoop out eggs and slop to the hundreds of women on line at the prison's cafeteria.

What we don't see is Daya receiving any medical attention whatsoever.

Considering that she's apparently somewhere between her second and third trimester, in real life, this would be a cause for concern. The general recommendation for pregnancy-related care—whether inside or outside prison—is once a month for the first six months, twice a month during the seventh and eighth months, and weekly during the final month. But this recommendation isn't always followed behind bars.

As part of an ongoing investigation for In These Times, I have interviewed nearly a dozen women across the country about their experiences of pregnancy and childbirth in prisons and jails. Their stories, which include long waits for medical care, dismissed concerns and sometimes outright neglect, show that Daya's apparent lack of prenatal care is not as far from reality as one might think.

Patti Hall was 18 weeks pregnant and had just learned she was having a girl when she was arrested, in 2011, on federal drug charges. She spent over three years at the local jail in Nashville as she fought a potential sentence of 25 years.

The jail had made headlines three years prior when Juana Villegas, an undocumented immigrant who was arrested during a routine traffic stop for driving without a license, was shackled to a bed during childbirth. Shackling during birth is a common practice in many jails and prisons. But, because Villegas's experience stemmed from the Nashville police department's participation in the federal government's 287(g) program allowing local police to enforce immigration law, it stirred controversy. The Davidson County Sheriff's Department subsequently issued a policy ending the shackling of pregnant women in custody.

But Hall faced other problems with pregnancy care while in custody. When she was seven months pregnant, she began bleeding vaginally. She had suffered a miscarriage the previous year and feared that she was miscarrying again. But when she told this to one of the jail’s nurses, "She just looked at me like I was crazy; like I was making some kind of lie up," Hall recalls. "I had to show her the pad."

The nurse, she says, simply told her that she had too much protein in her urine and recommended that she not drink the Kool-Aid served for lunch.

After that, Hall says, her body began to swell. "I swelled up so bad I couldn't wear shoes," she described. "I couldn't even grip anything with my hands because I lost some of the feelings in my arms and my hands." The women around her had to carry her food tray, she says, and even feed her, because gripping the utensils became impossible. Still, she says, she was not given any medical attention. According to Hall, another woman held in the jail, who had worked as a nurse before her arrest, told the officer that Hall was exhibiting signs of preeclampsia, a pregnancy complication characterized by high blood pressure and signs of organ damage, which, left untreated, can have fatal complications for both mother and baby. The only cure for preeclampsia is delivery of the baby. Nevertheless, Hall says, the medical staff did nothing.

"The swelling got so bad that it started to cut the feeling off," she says. "I couldn't feel anything."

In July, nearly four months after she arrived at the jail, Hall went into labor. "I sat in labor for almost three days," she says. But when she told medical staff, she says, they refused to believe her. "They told me, 'If your water is not broken, if your mucus plug has not fell out, and you are not dilated, you are not in labor.'" Three days later, on July 5, she was taken from the jail to the Nashville General Hospital at Meharry for an ultrasound. Once at the hospital, she refused to leave unless she was seen by an ob-gyn. "I was going to take the chance of having them tackle me to the floor or beat me up or whatever, to try to risk all that just to be able to see the doctor," she says.

When the doctor arrived, he saw that she was in labor and rushed her into the operating room for an emergency C-section. Fortunately, Hall's baby was born healthy. Hall was allowed to stay in the hospital with her newborn daughter for three and a half days before being taken back to the jail.

Correct Care Solutions, the private contractor that provides healthcare at the jail, and the Metro Nashville Health Department, which oversees it, declined to comment on Hall’s case, citing patient privacy.

While the lack of care Hall describes is extreme, inadequate prenatal care is not uncommon in jails and prisons. For example, a five-year study of reproductive healthcare in New York prisons, released in February by prison watchdog group Correctional Association of New York, suggested that pregnant women face delays in getting healthcare upon arrival. Although prison policy dictates that pregnant women must see the prison's ob-gyn within four days of admission, nearly 40 percent of the 18 women surveyed who entered prison pregnant said that getting the first appointment took more than two weeks.

The Correctional Association found that most women then received prenatal care at roughly the recommended frequency. But, as Patti Hall's story illustrates, this is not the case in every jail or prison. Emily Spaloss entered Arizona's Maricopa County Jail in Phoenix in January 2013 when she was two months pregnant. There, she says, she caught what she thinks was the flu. But she never found out, she says, because medical staff refused to see her during that time, advising her to drink water. "I suffered hot and cold sweats, throwing up, headaches, and all other flu-like symptoms," she recalls. The Maricopa County Department of Correctional Health Services declined to comment on her case, citing privacy.

But medical care isn't the only pregnancy-related need that goes unmet in Orange is the New Black—or in real-life jails and prisons. We see Daya ladling tray after tray with food in her prison cafeteria job, but we don't see her receiving the additional food and nutrients needed by pregnant women to ensure healthy pregnancies. Is this a Netflix oversight or a reflection of reality?

At the Nashville jail, Hall was not given prenatal vitamins despite repeated requests, she says. The only additional food she received was a small carton of milk, "like the kind you would get at a school," with every meal.

The lack of adequate food for pregnant prisoners comes up again and again in jails and prisons across the country. In New York state, each of the 18 pregnant woman interviewed by the Correctional Association stated that she was not given enough food during her pregnancy.

"I was pregnant and starving," says Tina Tinen, who was incarcerated at the Bedford Hills Correctional Facility in New York. She describes going hungry during the long stretch between the 5 p.m. evening meal and the 7 a.m. breakfast. Although the prison issues issued a pregnancy snack, consisting of an eight ounce carton of milk, a piece of fruit and a sandwich with cold cuts, she still recalls feeling hungry all the time.

Her experiences were echoed by the other women. "I remember going to bed hungry many, many nights," one woman told the Correctional Association. "Those pregnancy snacks don't do much for a pregnant woman."

At Maricopa County Jail, Spaloss says, only one hot meal a day was served, and the pregnancy snack was one extra piece of bread and one extra serving of milk. She lost seven pounds during the one-and-a-half months she spent in the jail, she says. She might have lost even more weight had she not been able to order from the canteen. But the choices there, she says, were limited to honey buns, chips, crackers, cranberry juice and water.

Maricopa County Sheriff's Office did not respond by deadline to a request for comment on the food available to prisoners. The N.Y. Department of Corrections and Community Supervision noted that prisoners can purchase commissary food in addition to meals and pregnancy snacks, and directed In These Times to a document about pregnancy care that read, in part, "Dieticians are involved to ensure nutritionally and calorically adequate diet to all inmates, including those with special dietary needs.”

Even when laws mandate adequate nutrition and prenatal care, change can be slow in coming. In 2014, Massachusetts passed the Act to Prevent Shackling and Promote Safe Pregnancies for Female Inmates. But Lauren Petit, attorney with Prisoners' Legal Services of Massachusetts, and Rachel Roth, a women's health policy expert, have been monitoring the implementation of the act and say that the food available often falls short of what doctors, midwives and pregnancy guides recommend to women on the outside.

Pregnant women are advised to eat four to five servings of vegetables, three to four servings of fruit, several servings of whole grain breads or other high-complex carbohydrates, three servings of dairy, and three servings of protein each day. The snacks offered behind bars in Massachusetts range from milk and a graham cracker; to milk, white bread and cheese; to  milk, carrot sticks, one fruit, and a peanut butter and jelly sandwich. Some jails offer snacks twice a day, while others offer them only once.

Given that 3 to 4 percent of women in prisons are pregnant and 5 percent who enter jails are pregnant, inadequate medical care and insufficient nutrition affect hundreds of women in the U.S.—and their fetuses.

So yes, Netflix’s depiction of Daya’s experiences is more than plausible. What we don’t see Daya receiving in season 3 is what many women don't get in U.S. jails and prisons. And while we may be concerned for Daya, we should be even more alarmed that real-life women aren’t able to access the basic pregnancy care they need.

Victoria Law’s investigation of pregnant people’s treatment behind bars will appear in the September 2015 issue of In These Times. This reporting is funded by the Goodman Institute for Investigative Reporting.

Victoria Law is a freelance journalist focusing on women’s incarceration. She is the author of Resistance Behind Bars: The Struggles of Incarcerated Women (2012) and co-author of forthcoming Your Home Is Your Prison (New Press).