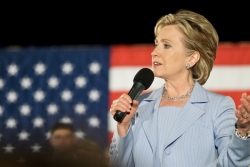 Activists had criticized Clinton for what they said was a contradiction between her recent rhetoric on "ending mass incarceration" and her campaign's connections to some of the country's leading private prison corporations. Clinton's campaign announced Friday she will no longer accept donations from federally registered lobbyists or PACs for companies involved in incarceration. Her campaign said that money she has already recieved will be donated to charity.

As Alice Ollstein reports at ThinkProgress, the announcement came after months of campaigning by immigrant and civil rights groups.

“When we’re dealing with a mass incarceration crisis, we don’t need private industry incentives that may contribute — or have the appearance of contributing — to over-incarceration,” campaign spokesperson Xochitl Hinojosa told ThinkProgress, explaining that Clinton will donate the large amount she has already received from these sources to a yet-to-be-named charity.

Hinojosa explained that the move is part of Clinton’s promise to “end the era of mass incarceration,” especially private prisons and private immigrant detention centers.

“She believes that we should not contract out this core responsibility of the federal government,” Hinojosa said. “This is only one of many ways that she believes we need to re-balance our criminal justice and immigration systems.”

Yet the decision came after months of pressure from civil rights and immigrant justice groups, who launched online petitions and interrupted Clinton’s public events, demanding she cut ties with the private prison industry.

“Our message was, ‘You can’t be pro-immigrant and still have this blemish on your record,'” said Zenén Jaimes Pérez with United We Dream, one of many organizations that teamed up to press Clinton. “She had [campaign donation] bundlers who worked for the Corrections Corporation of America and Geo Group, which run most of the immigrant detention centers in this country. For me, it was a big deal, because my dad was detained in a Geo facility. She was taking money from a group profiting from my family’s suffering.” Continue reading...

As Lee Fang at The Intercept reported earlier this summer, several prominent "bundlers" for the Clinton campaign were tied to Geo Group and Corrections Corporation of America.  Bundlers are campaign fundraisers who solicit large donations from friends, family and colleagues. (They regularly go on to political positions or recieve other government favors)

Richard Sullivan, of the lobbying firm Capitol Counsel, is a bundler for the Clinton campaign, bringing in $44,859 in contributions in a few short months. Sullivan is also a registered lobbyist for the Geo Group, a company that operates a number of jails, including immigrant detention centers, for profit.

Hillary Clinton has a complicated history with incarceration. As first lady, she championed efforts to get tough on crime. “We need more police, we need more and tougher prison sentences for repeat offenders,” Clinton said in 1994. “The ‘three strikes and you’re out’ for violent offenders has to be part of the plan. We need more prisons to keep violent offenders for as long as it takes to keep them off the streets,” she added. Continue reading...

During this campaign Clinton has spoken publicly about the need to end "mass incarceration." In April she told an audience at the Public Policy Forum at Columbia University that "there is something profoundly wrong when African-American men are still far more likely to be stopped and searched by police, charged with crimes, and sentenced to longer prison terms than are meted out to their white counterparts."