Fracking Exec Reportedly Admits Targeting the Poor, Because They Don’t Have ‘The Money To Fight’ 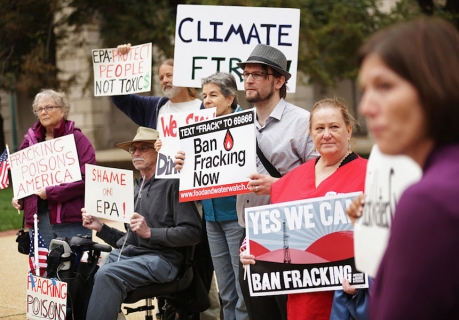 On Monday, the Pittsburgh Post-Gazette reported accounts of unusually candid comments by an oil and natural gas industry executive, Terry Bossert, at a Pennsylvania Bar Institute gathering in Harrisburg this April.

“We heard Range Resources say it sites its shale gas wells away from large homes where wealthy people live and who might have the money to fight such drilling and fracking operations,” stated an attendee.

Terry Bossert is vice president for legislative and regulatory affairs at Range Resources, a natural gas exploration and production company. Range Resources was the first to tap into Pennsylvania's Marcellus Shale, in 2004, kicking off the state's current fracking boom. Some scientists and environmentalists warn that chemicals used in fracking may contaminate the groundwater in surrounding areas, potentially harming residents.

According to the Post-Gazette, several attorneys at the Harrisburg event, including Joanne Kilgour, director of the Pennsylvania Chapter of the Sierra Club, confirmed Bossert's statements. Several attendees say they recall him prefacing the remarks with, “To be perfectly frank…”

To be perfectly frank, it sounds like oil and gas companies are taking advantage of the vulnerable.

That's not news, although industry executives have never made their agenda this explicit. In a 2014 investigative report for In These Times, Hannah Guzik found that oil and gas operations in California are disproportionately located in poor and minority communities. An analysis by the nonprofit FracTracker Alliance conducted for the article determined that the 5 million Californians living within a mile of an oil or gas well had a poverty rate 32.5 percent higher than that of the general population. A related analysis for the Natural Resources Defense Council found that the majority of people living near wells in California are people of color. Guzik writes:

What all this means is that low-income communities of color are bearing the brunt of California’s oil industry—including its fracking experiments, which are poorly regulated and whose health impacts are largely unknown. ...

“It’s a civil rights issue,” says Abre’ Conner, the staff attorney at Kern County’s Center on Race, Poverty and the Environment. “When we look at where the fracking wells are being located, when we look at the health impacts across the state of California and really across the country, we see the same types of issues and the same types of disparities that we’ve seen with education and voting rights.”

Range Resources is located in Fort Worth, Texas. In 2015, the company's average total production per day was 1,395.4 million cubic feet of natural gas equivalent. Eighty-six percent of the total production was from the Marcellus Shale. Pennsylvania has become a hot spot for fracking, along with many other states, including Colorado, Texas, California and North Dakota.

The Pittsburgh Post-Gazette reports that the Center for Coalfield Justice and the Pennsylvania Chapter of the Sierra Club plan to request a state Office of Environmental Justice review of Range Resource's drilling sites to determine whether the company selected poorer areas for fracking.

Jessica Kozik is an editorial intern at In These Times. She is a student at Columbia College Chicago.