Talk on the Rez: English Prosody and the Native American Accent 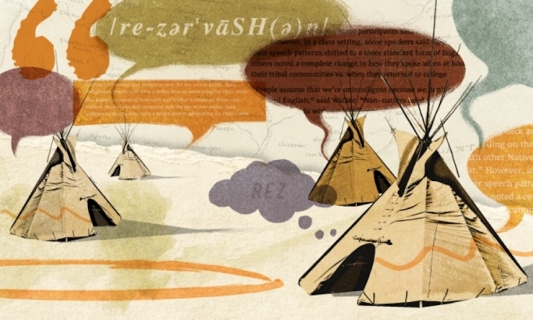 An emerging field of research suggests that much like Cajun English or African American Vernacular English—otherwise known as Ebonics—unique speech patterns also have developed among indigenous people in Canada and the United States, creating Native American English, or “the rez accent.”

Here’s what else researchers have discovered: The rez accent—short for “reservation accent”—occurs in indigenous communities regardless of whether a heritage language is spoken; and that through English, indigenous people are creating and maintaining their own ethnic identities.

In other words, the use of English could be just as important to indigenous identity as mother-tongue languages.

Kalina Newmark is a Tulita Dene First Nation member and co-author of the study, “‘The rez accent knows no borders’: Native American ethnic identity expressed through English prosody,” which appeared in the journal Language in Society last fall.

“I don’t speak Slavey or my heritage language, and I think there’s a large portion of Native people who don’t, so how do you reconcile your identity with not being able to speak your indigenous language?” says Newmark. “As Native people, we’re survivors, so it’s kind of cool to look at how we’ve adapted English to really suit our needs.”

In indigenous communities, the rez accent isn’t exactly new. YouTube star Auntie Beatrice (pronounced beech-ress), played by Lakota-Hidatsa comedian Tonia Jo Hall, regularly employs a particularly unique version of the accent for jokes and monologues aimed squarely at Native viewers, while other indigenous comics from the United States and Canada have embraced Native American English for years. Perhaps the best-known example of the rez accent comes from Thomas Builds-the-Fire, a character from the 1998 film Smoke Signals. In the Washington Post’s write-up of the movie, the reviewer described Builds-the-Fire as a bit of a nerd, but “when the born storyteller squeezes his eyes shut and spins a tale in his ‘reservation accent’ that makes him sound like an aboriginal Emo Phillips, you know that his roots are planted in ancient soil.” Thomas Builds-the-Fire’s accent is meant to be a little exaggerated, but it makes Native viewers instantly aware that he’s part of the group.

Where the accent comes from is still a mystery. To many indigenous people who speak English as a second language, the intonation and patterns of heritage languages offer some clues to the accent’s origins; however, it’s only one clue. Another may lie in the boarding or residential school experience.

“It’s always one of the questions that gets asked,” says Nacole Walker, another of the study’s authors and member of the Standing Rock Sioux tribe. “We talked about the Relocation Act and the amount of intertribal mixing that’s been happening since the boarding school days. Those were the first times when there was a large amount of Native American students coming together from different parts of the country.”

In the 19th and 20th centuries, tens of thousands of Native children in the United States and Canada were taken from their families and mixed together in boarding schools to be assimilated into white culture. In the federal government’s attempt to eradicate indigenous languages, children were forced to learn English.

Researchers hypothesize that the experience may have given rise to a “standardized” rez accent among ESL learners, which was later carried home to tribal communities. In the mid-1900s, many Native people moved from their reservations to cities—some by force, others by necessity—where new, intertribal communities sprung up, perhaps further reinforcing the accent.

The United Nations estimates that of the nearly 200 indigenous languages still spoken in North America, less than 40 percent are used by young adults or children. Researchers point out that Native identity is being shaped not only by the loss—and revitalization—of heritage languages, but also by the repurposing and remixing of English.

“There are people who don’t have any of the Native accent. Then there’s someone who kind of speaks in different environments with the Native accent—they’re someone who code switches,” says Newmark. “Then there are some who push that rez accent to reaffirm their identity or to let others know that they’re Native. I would hope that they wouldn’t try and force it, but I think some people do.”

The accent isn’t without its baggage, though.

The study’s authors conducted their research while attending Dartmouth College, interviewing and recording 75 Native people on the Standing Rock Sioux Reservation, in Canada’s Northwest Territories, and at Dartmouth.

One of the study’s participants, a Lumbee tribal member, recalled consciously trying to lose his accent as a child because he thought it made him sound dumb, while a Navajo citizen who participated in the research reported working, for the same reason, to mimic a “standard” form of English while in class. Another interviewee reported being forced to take ESL classes in primary school even though English was their first language.”

“You have to think about the psychology that goes into that is pretty profound,” says Newmark. “Not many other communities have to go through that where they say, OK, if I speak this way, will I be interpreted as a dumb person?”

Many of the people who agreed to participate in the study reported switching back and forth between standard and Native American English depending on the setting and the company they kept. In casual settings with other Native people, some participants said that the “rez comes out.” However, some speakers said they noticed that their speech patterns shifted to a more standard form of English in a class setting. Still, others noted a complete change in how they spoke at home in their tribal communities versus when they returned to college.

“People assume that we’re unintelligent because we don’t speak perfect, standard English,” says Walker. “Non-Natives need to understand that it has nothing to do with our intelligence.”

The essential lesson of Newmark and Walker’s research: When non-Natives understand and recognize that the rez accent exists, then indigenous people may have a better shot at advocating for their needs. But Newmark and Walker say more investigation is needed. Although decades of research and awareness have informed the understanding of African American vernacular English, Chicano English, and other dialects, this study on Native American English is believed to be the only one of its kind.

“Our research is really saying that the way Native people speak is completely fine and that it’s logical and orderly,” says Newmark. “When we understand that the way we speak is perfectly fine, then it’s much easier to be heard.”

("How 'Rez Accents' Strengthen Native Identity" was originally published in YES! Magazine and is reposted on Rural America In These Times in accordance with their sharing policy.)

Tristan Ahtone wrote this article for YES! Magazine. Tristan is a journalist and member of the Kiowa Tribe of Oklahoma. His work has appeared on and in The Newshour with Jim Lehrer, National Native News, Frontline, Wyoming Public Radio, Vice, the Fronteras Desk, NPR, and Al Jazeera America.