For Democrats, the Road to Victory in 2020 Runs Through Rural America. This Report Offers a Road Map 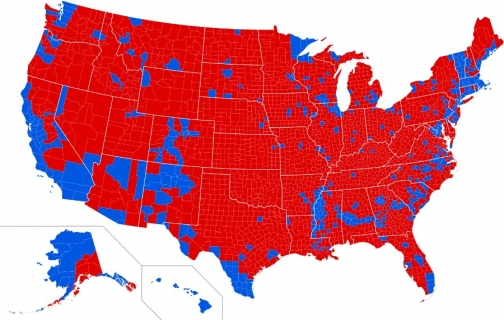 It’s just over three years since the 2016 election and it has become unsettlingly normal in liberal circles to dismiss "rural America" as "Trump country" and look elsewhere for Democratic electoral hopes―like the Trump-dissatisfied suburbs.

A refreshing reportfrom the advocacy organization People's Action, composed of 48 member groups in 30 states, starts from the opposite premise: If Democrats want to regain power―and this goes for the Presidency and the Senate as well as state governments―they have got to figure out how to win in rural parts of this country. The question, as we barrel toward the 2020 elections, is how. The People’s Action report, which is titled "Win Rural: How to Build a Progressive Populist Political Movement in Rural and Small-Town America," offers the beginning of an answer.

In 2016 in rural counties, there was a massive defection of voters who had supported Barack Obama in 2012 to Donald Trump. Between 2012 and 2016, the report notes, rural areas became more Republican by about 11 percentage points, a change that swung some rural states, won Trump the electoral college, and created the county-by-county electoral map of which Trump is so proud―a handful of blue islands surrounded by a sea of red. While the map does not show the overwhelming mandate Trump evidently thinks it does, nor is it as insignificant as CNN's Chris Cillizza would have us believe.

"What the map Trump so loves really shows is that there are large areas of the country where not that many people live," Cillizza writes. "And in those less populated areas, Trump won. That's it."

Unfortunately, that's not it. And if Democrats think it is, they should get ready for four more years of Trump. What the map shows is that 2016 Democratic presidential candidate Hilary Clinton lost nearly every rural county in the country. Whatever one’s opinion of the electoral college and the extra weight it gives to less-populated states, that is our electoral reality and it's hard to imagine that a candidate could lose so badly in rural parts of the country and still win the presidency.

Winning back enough rural votes to win the presidency, though, is not as daunting as it might sound. As the People’s Action report points out, "Of the more than 136 million votes cast in the 2016 election, 77,744 votes in three states―Michigan, Pennsylvania and Wisconsin―effectively decided the election." That's why People's Action affiliate groups are focusing their campaigning in 100 counties, including 37 "pivot counties," in 15 key states.

The report puts it this way: "There is a clear path to shifting the balance of power in those communities in a way that would profoundly impact the future of those states and the entire country."

The report also reminds us, however, that winning the next presidential election, while important, is not enough. As of this year, Republicans have gained control of the legislatures and governorships in 21 states, compared to the Democrats’ 15 states―and so Republicans wield disproportionate power to draw U.S. congressional district lines in ways favorable to their party.

"The 2020 election," according to the report, "will be critical in shaping redistricting fights over the next decade and it will be vitally important to have targeted races in rural areas to pick up additional seats in state legislatures that will draw maps for the next decade in most states."

Finally, the report argues that rural people are not only a means to an electoral end but an essential part of a broader people's movement:

"Over the past century, from the New Deal to the civil rights movement, nearly every successful movement that sought to expand political freedom and economic opportunity was built upon broad coalitions between urban and rural communities. This report provides a path towards a new 'great majority'―multiracial, working class communities across rural, small-town, suburban and urban areas―with the power to create a progressive populist movement that can transform the next generation of American politics."

Assuming one decides not to abandon hope of winning over rural voters, how should one go about it?

The liberal political and media elite has agonized over this question. Their response to the 2016 election reminds me of someone woken in the middle of the night by a pounding on the door: “Who the hell is out there and what do they want?!”

They, of course, being "rural America," though to the liberal establishment they rarely become more concrete than that. Rural people, and their feelings and needs, have been largely lost behind a caricature of “rural America”―a way of containing in a single phrase a mysterious, unsalvageably-Republican region populated by vicious racists and under-educated bigots.

One of the gifts of the People's Action report is that it is based on more than 115,000 conversations in 15 states with actual rural voters. That means countless hours of hard work by canvassers, who reportedly knocked on more than 392,000 doors. It also means rural voters emerge a bit from the haze of caricature and turn out to be a rather complex, diverse and politically-moveable lot.

Even post-2016 voting trends don’t support the “rural America” caricature. For example, the 2018 midterm elections were widely interpreted in the media as further evidence of the right-ward shift of rural voters―further evidence, as one writer put it, that “America is in a cold civil war.” According to People’s Action, though, this reading “misses a critical part of the story"―namely, that in 2018 rural areas became about 7 percentage points more Democratic, often by larger margins than suburban areas. The shift was particularly strong among single white women, who moved Democratic by about 17 points, and young white voters, who shifted left by about 16 points.

One of the things that bothers me most about our national discourse around rural people is the assumption that voters lead and political parties merely follow. By this way of thinking, “rural America” has led the Republican Party toward the white nationalist right―not the other way around.

The People’s Action report, to the contrary, finds that the right wing has aggressively, and often successfully, targeted rural people. And it lays a large share of the blame on Democrats and the left: “The lack of investment in progressive communications infrastructure and the inability to communicate around shared values has led to a vacuum that has been occupied by extremist forces that do not represent the interests of rural communities.”

In a New York Times op-ed, People’s Action Director George Goehl put it this way: “In front-porch conversations, the most common thing we hear is, ‘Nobody ever asked me what I think.’ That’s a problem. Because white nationalists are filling that vacuum. They’re organizing around people’s pain and using racism to help make sense of changing economic conditions and racial demographics.”

To remedy this shortcoming, the report recommends long-term investment in communications and voter-engagement infrastructure in rural communities and building policy agendas that speak to rural needs and values. And, contrary to the conventional wisdom contained in the “rural America” caricature, that doesn’t necessarily mean moving to the political center or right.

The report finds that “progressive populist policies are popular in rural America”: “Through deep listening campaigns conducted by People’s Action and in polls commissioned by groups like RuralOrganizing.org, rural residents consistently demonstrate broad support for progressive measures like free college tuition, Medicare for All, and increasing the minimum wage to $15/hour. Polling also strongly suggests that small-town voters feel the system is rigged for the powerful and wealthy and a clear majority of rural residents believe that Congress is giving tax breaks to the wealthy instead of investing in rural areas.”

The report makes the point, however, that it does not work to paper over racial divisions by talking only about shared economic interests. No, the tried-and-true fascist tactic of harnessing people’s suffering and directing it against a racial other must be met head-on, with a narrative that explains how throughout history the powerful have stoked racism and immigrant-bashing to sow division, direct class anger away from themselves and so hold on to power.

According to the report, “There is growing evidence that race-conscious populist narratives resonate deeply in rural and urban communities.” Let’s hope so.

The report goes on: “Rural communities share many concerns with urban and suburban communities, but rural problems need specific solutions. Rural and small-town communities also need to know that candidates and campaigns have an understanding of their experiences and have a clear plan to improve their lives.”

We must remember that “rural America” is not one thing. If you drive the back highways through, say, majority-white Granite Falls, N.C., or through majority black Wilcox County, Ala. or through the Coeur d’Alene Indian Reservation in Idaho, you’re going to meet rural Americans who’re facing problems that are in many ways similar but in many ways different.

No report can offer a one-size-fits-all plan for how Democrats can win in these rural places. But, in a time when much of the liberal elite has written off rural America as a problem to be worked around, People’s Action offers a vision in which rural Americans are a key part of a people’s movement for a better, more free, more equal world. The report also offers a stark reminder that for Democrats the road to victory, to beating Trump, runs through rural America.